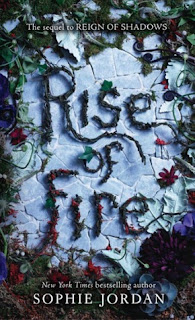 Luna and Fowler have escaped the kingdom of Relhok, but they haven’t escaped the darkness. When a battle against the dark dwellers mortally injures Fowler, Luna is faced with a choice: put their fate in the hands of mysterious strangers or risk losing Fowler forever.

Desperate to keep the one bright part of her life alive, Luna accepts the help of soldiers from a nearby kingdom. Lagonia’s castle offers reprieve from the dangerous outside world—until the king discovers both Fowler's and Luna’s true ties to Relhok and their influence over the throne.

Now pawns in each kingdom’s political game, Luna and Fowler are more determined than ever to escape and build the life they’ve been dreaming of. But their own pasts have a tight hold on their hearts and their destinies. Luna must embrace the darkness and fire within her before she loses not only Fowler, but the power she was destined to inherit.

That didn't take long. Rise of Fire is my second read of 2017, and it's a two-star read. My first read, Wayfarer, was great, but this one was incredibly disappointing and irritating. I partially regret reading this duology, even though I loved Reign of Shadows.

This sequel novel picks up exactly where Reign of Shadows leaves off - with Fowler trapped among dwellers, and Luna dropping after him. Luna finds him and together, they leave the dwellers' nest behind. But Fowler has been infected with dweller toxin, and he sickens quickly. The pair is rescued by solders of Lagonia, who take them to the king of Lagonia. King Tebald is cruel and ruthless and recognizes Luna as her mother's daughter immediately, as well as Fowler as the prince of Relhok. He allows for Fowler to be taken care of by his healers... because Fowler and his daughter Maris have been betrothed since birth. But upon learning that Luna is the true ruler of Relhok, King Tebald decides that two weddings are better than one, and Luna will marry his heir, Prince Chasan. Trapped in Lagonia and with no place to run, Fowler and Luna must trust each other and find a way out.

Redeeming qualities of this book... it ends well. The ending is warm and fuzzy and is a hasty attempt at reclaiming the book's positive attributes (whatever they were). I love a happy ending, regardless of how awful the story was beforehand.

Other redeeming qualities... Fowler is possibly the only person in this book with a functioning brain. It's too bad that he's sick and dying for more than half the book. Even then, he's still the only person that seems to have a good grip on reality. I always liked Fowler, and he is the only character in this entire sequel/conclusion novel that I liked.

First thing - Luna. I wanted to bang my head against the nearest wall, or throttle her, throughout the entire book. There was not one scene when I felt like I liked her like I did in Reign of Shadows. She's so stubborn and not in a good way; every time she dug her heels in, she got hurt, or Fowler got hurt because of her. She refused to run in certain situations, or hide, or back down, and in all of those cases, her stubbornness was utter stupidity. What kills me about her stubbornness? She refuses to "take orders" from Fowler, because I-am-woman-I-will-not-be-ordered-around. SERIOUSLY?! You'd rather die than take an order to hide? This isn't feminist, this is pure stupidity. Luna never recognized when it was time to be stubborn and when it was time to tuck her tail between her legs and find that shred of self-preservation. You know how some heroes/heroines have a selfless, saving-people quality? I could see Sophie Jordan trying to make Luna a character with that quality... honestly Luna came off as stupid and idiotically stubborn.

Furthermore, to add to her fake feminism, about three quarters of the way into the story, she suddenly has three men fighting over who is going to marry her. And what does she say? Out loud? NOTHING. Not a word. She lets the king and two princes talk over her (easy, because she doesn't say a word). She lets the king declare her marriage to his son (and then himself, when he changes his mind). She lets Fowler and Chasan literally fight (i.e. punch, kick, fight to the death) over her. There was an actual fistfight duel in this book! And she said nothing! Did nothing to prevent it! And yet she loves Fowler and is always declaring how she's going to do things her way? But she never once resisted any of the marriage declarations that King Tebald made. Not once.

Somebody explain that feminism to me. And don't tell me it was a calculated silence - no, girlfriend was shriveled and shocked and silenced like a lamb. Or... a weak little girl. At 75% into the conclusion of a series, this is not what I wanted to see. Instead of a fully fledged kickbutt heroine that Luna likes to pretend that she is, we have a cowering, weak girl.

And I'm not finished yet! The romance in this book is a load of dung! Luna goes through at least nine changes of feelings towards Fowler in this book. She decides that she no longer has feelings for him when she learns who his father is (um, what?). Then she decides that she really does have feelings for him. But then she hates him again when he mutters a name in his fevered sleep. And then she fights for him, and then hates him again when she learns that he is betrothed (since birth and by royal decree, but that doesn't reach Luna's tiny brain), and it. Keeps. Going. I swear I have whiplash from all of that deciding about her feelings.

What's worse? There is a sort-of love triangle in this book! Don't get me wrong, Luna only has feelings for Fowler (on and off, as I mentioned, but no one else). Fowler, bless him, has feelings for Luna only (and never wavers). But of course enter Princess Maris, Fowler's betrothed, and her handsome but slimy older brother Prince Chasan, who sinks his claws into Luna. There is no romance between Chasan and Luna, or Fowler and Maris. BUT. The inclusion of these two characters (Maris and Chasan) is clearly to throw a wrench in the romance. Honestly this is so unnecessary and annoying.

Perhaps I misspoke - there is romance on Chasan's part. After like, two days? He is in love with Luna. I mean moony and possessive type of love. It's sickening and ridiculous and unnecessary. WHY is Chasan in this story? To torment readers. To add an "interesting" element to the romance? I assure you, there is nothing interesting or fun about this unnecessary "love triangle". Chasan's feelings, coupled with Luna's wishy-washy feelings towards Fowler, were obnoxious.

So, the romance in this book is off-putting, poorly written, and dissatisfying - to say the least. I have a great deal of respect for Fowler, who is so in love with Luna throughout the entire story, and is a gentleman in every way. Fowler redeems the story a little. Luna deserves exactly zero square inches of his dirty socks, let alone him.

The climax of this book is so jumbled and rushed! This book ends so haphazardly, it's like the author threw it together and put same tape to hold it all together (does that comparison make sense?). There was a certain death and Fowler is casually okay with it? I'm not buying it. The ending was disjointed and it just didn't fit well. Especially with a deus ex machina move that Luna pulls - the author was probably scrambling for a way to save the ending. Deus ex machina, people. Look it up.

I am so irritated! This book was incredibly infuriating, especially after a great start to the series with Reign of Shadows. I haven't read a Sophie Jordan YA series that I actually liked.

I highly do not recommend this book, or series. Of course, if you've read Reign of Shadows, you should probably decide for yourself and read this book, because there is a good chance that you'll enjoy this book (as always). But if you were on the fence about reading Rise of Fire, or the series in general, don't. Don't do it! Not worth the time/effort/money. Thank goodness it only took me like, two hours to read this book (what was up with that, by the way? This book felt so short).

1.5 stars -> rounded down to 1 star. Originally I gave the book 2 stars, but even the redeeming qualities (the few of them) weren't enough to save this one. I'm so frustrated I could scream! And to think, I'm about to read another Jordan book very soon (an adult one though - Fury on Fire. Reviews have been negative so far. Joy!).