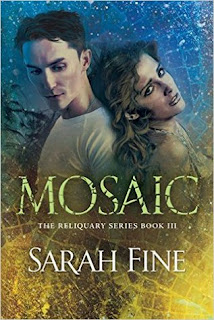 Mattie Carver never thought she’d give up her small-town life to become one half of the best magic-smuggling duo in the business. Until recently, she didn’t even know such a business existed. But as an unusually strong reliquary—able to carry vast quantities of magic in her body, undetected—she’s been pulled into an underworld of organized crime and addictive enchantments. And although she’s determined to keep things professional, her partner, Asa Ward, is a temptation she finds increasingly hard to resist.

Even as their relationship reaches a tipping point, Mattie is wary; Asa already told her he hates cages—literal or otherwise. But when an international black-market magic exchange goes awry, Asa falls into the hands of his enemies. Now, with the man who refuses to be controlled under the command of a ruthless captor, Mattie must decide how far she’s willing to go to rescue him—assuming there’s anything left to save.

Most of you who follow my blog already know much I adore Sarah Fine's books. This is the fourteenth book I've read by her (out of fourteen, if I've counted correctly). None of her books have gotten below three stars. I've definitely struggled with this series more than her other series (see my reviews of Reliquary and Splinter), but I can confidently say that this is probably the best book of the series.

Mattie and Asa have been working together, doing freelance jobs in transporting magic, earning their way and keeping their freedom. But one transaction goes terribly wrong, and Asa is captured by dangerous men. But Mattie is going to have to work with an even more dangerous man, and an elusive woman, to get Asa back. She'll quickly find out just how much she wants to get him back, and how much she'll risk to do so.

Full disclosure: I knew a lot about this book before reading it. Meaning, I knew the ending (and it's cruel). I also knew that the author planned this series with a fourth book in mind. I know that she always intended to publish a fourth book in the series, and did not want to leave readers with the ending of this book (again, it's cruel). With all of that in mind, I think my opinion and rating of the book is extremely fair. I liked this book a lot, up until the last few pages, when the ending hit me in the face. I already knew about the ending, but I also knew that it wasn't supposed to stick (because there was supposed to be a fourth book).

Mattie reaches her full potential as a strong, capable young woman. In the previous books in this series, I accused her of being weak and indecisive, and I didn't enjoy those traits of hers. But in this book, she is much more willful and determined. She is completely driven by her devotion to Asa, and will stop at nothing to get him back. Mattie evolves into a hardened yet passionate and confident person, even without Asa by her side.

I think one of the other reasons why I liked this book so much (besides Mattie's character growth) was the complete lack of Ben in this book. He's gone, and so is Mattie "former" life. There is not a single mention of Ben or Mattie's family, and I was fine with this. None of that was necessary in this book; Mattie had more pressing matters to attend.

I love the new characters that we get to know in this book! Mattie travels a lot, including heading to Russia, where she teams up with that super dangerous guy I mentioned. Spoiler alert - it's Volodya! And he is every bit as deadly, creepy, and certifiably insane as you are led to believe. He is also someone you might not expect. But he proves to be extremely useful in this story, and I felt for him. There is an equally dangerous and important character in this story - a woman - whom I also really liked and felt for. She helps Mattie a lot, and works with Mattie and Volodya. This was an interesting dynamic. I adored Volodya's "nephew", Daniil. Daniil is not related to Volodya at all, but he is highly trusted by Volodya. He's a Strikon but he's a decent guy.

Asa isn't as present with Mattie as he is in the other books, and yet, he consumes all of the pages. While they are separated a quarter of the way into book (when he is captured), he is still very present, in Mattie's thoughts and emotions. It is clear that he suffers a great deal in this book, but he loses none of his cunning and his wit and his ability to get out of sticky situations. The man always has a plan upon a plan.

The romance in this book was perfect. Yes, Mattie and Asa are separated for at least 50% of the book. But the first 25% of the book got really intense, between the two of them. The last 25% was a roller coaster, when they reunite (it's not quite easy at first). The last few scenes are sweet and steamy and really powerful. I liked the romance - it's unconventional in this book, because it exists so powerfully even though the characters are separated. The chemistry between Asa and Mattie is evident in the first 25% of the book, and throughout the rest of their interactions.

I enjoyed the story as I was reading. I wasn't bored, and I wasn't too tense about things. There was no love triangle to be worried about, especially with the magnitude of Asa and Mattie's feelings for each other. I knew that somehow, Mattie would succeed and somehow, she and Asa would find a way. I enjoyed reading the book, and was completely hooked. It's like this book had a different feel to it, compared to the others? It was more adventurous and "fun", even though the stakes were ridiculously high and I should have been biting my nails.

The ending is my only complaint, and I'll talk about that in the next section.

I didn't like the ending but I take comfort in knowing that the author wanted to publish four books in this series, and that there was going to be a book to follow this one that would finish Mattie and Asa's story and satisfy readers (according to the author). However, the fourth book isn't happening, and we're stuck with this cruel ending and our imaginations. I'm still upset and heartbroken over the lack of fourth book, more than I am about the ending. Because I know (from the author) that this isn't the ending the author wanted. This is why I'm not sinking my rating of this book too much - because the intentions are there. Yes, we're not going to get that fourth book. But at least I know that it wasn't intended to end this way.

This is actually a tough call. Given that this is the official last book in the series now, and it ends cruelly, I do not recommend the series. I do recommend the book if you've started the series - see the series through. But I don't think I'd recommend the series overall, because it's a difficult series to read (the first two books are), and it doesn't end well at all. Sadly, it wasn't supposed to end this way, but that's the ending we're stuck with.

4 stars. Like I've said, I liked this book a lot. I enjoyed it and had a lot of fun reading it... until the ending, which I knew of beforehand. The ending didn't surprise me because I already knew about it, but it will shock and hurt you, the first time you read/hear about it. I totally trust that Sarah Fine would have written a wonderful conclusion novel with a fantastic HEA, had she been given the chance.