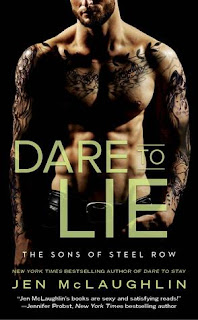 As an undercover DEA agent in the most powerful gang in Boston, Scott Donahue accepts the risks of living a double life. But when Tate Donovan, leader of the Sons of Steel Row, assigns Scotty to take his place in a bachelor’s auction sponsored by his sister’s sorority, he’s exposed to a whole new level of danger. Even though Tate makes it very clear—Skylar is off limits—the second Scotty sees her, he’s a goner. But how does he tell Sky she’s falling for a man who doesn’t exist?

Sky can’t resist Scotty’s cool confidence or the raw, edgy power oozing from his perfect body. She’s always been the good girl, but he brings out the bad in her. And even though she knows so little about who he really is, Sky’s willing to take the biggest risk of all. But putting her heart on the line is no guarantee that Scotty won’t slip through her fingers...

Dare to Lie is the third book in the Sons of Steel Row series, and at the moment, it looks like it will be the last. This novel follows Scotty Donahue and Skylar Daniels, and it's easily the riskiest and the trickiest of the three novels (in terms of how high the stakes are, for Scotty, and Skylar). Dare to Run (book one) remains my favorite, but this one is probably my second favorite, ahead of Dare to Stay. I really hope there is at least one more book in the series though!

Scotty Donahue is a DEA agent, working undercover as a Son of Steel Row. He is a lieutenant of the Steel Row gang and very good at his job - both of them. When Tate Daniels, leader of the Sons of Steel Row, asks him to go in his place to a charity auction that his little sister is hosting, Scotty knows better than to refuse. He doesn't expect to be captivated by the stunning - and innocent - med student. Both the DEA and Tate ask Scotty to watch over Skylar, because of rising tensions between the Sons and Bitter Hill. But what happens when Skylar finds out about Scotty? Or worse - if Tate and everyone else finds out who Scotty really is?

In Dare to Lie, we're lead to believe that Scotty is a bad guy, trying to harm his brother. But Scotty is an undercover agent and he was trying to protect Lucas. He gets Lucas and Heidi out of the state and covers up their disappearance with a fire and fake deaths. Scotty is young - twenty-five - but he knows Steel Row better than most. He is a hardened man playing two roles, and he is determined to see Steel Row become a better place. Scotty is young (as the Sons like to remind him), but he is definitely a rugged alpha and he proves it several times over, in this book. I personally loved how protective he was over Skylar, and how much he cared about his family and Chris and Molly.

Skylar, on the other hand, is completely innocent. She isn't involved in the crime life at all, and she doesn't want to be. She has no idea that Scotty is a Son of Steel, or that he is a DEA agent. She's a twenty-three-year-old med student who studies a lot and lives a lonely life due to her overprotective older brother, Tate. Skylar is a sweet girl who likes the consistency of her life, but also wants more. When she sees Scotty Donahue at her charity auction, she has this feeling that he is the one to shake up her life.

The romance took off pretty quickly. Skylar and Scotty have intense chemistry, and they recognize the attraction between them pretty quickly. They throw down the very first night after they meet, and they continue to see each other. At first, their connection is completely physical, and they can't get enough of each other. But they start to open up to each other (well, for Scotty, as much as he can, which is very little), and they realize that they like each other, besides being in lust with each other.

So, the romance was pretty steamy, and that happened quickly. There were plenty of steamy scenes throughout the book. This pair is really passionate and there is an energy and a fervor to them that is different from the other pairs in the previous books. Skylar is an actual "good girl" with no taint, and Scotty is the "baddest" of bad (especially being a double agent). The sparks (read: inferno) really fly between them, and I love how they connected.

Of the three books in the series, this one had the most intense story, in terms of the Steel Row/Bitter Hill war. Everything escalates to a frightening level, in this book - much deadlier than in Dare to Run and Dare to Stay. The stakes are so high for Scotty, because he could get outted to either side. The stakes are high for Skylar (despite her not being aware), because Bitter Hill is coming after the loved ones of Steel Row members (and she is Tate's sister). The stakes are high for the pair, because Tate will kill Scotty if he finds out about them. The scene when he inevitably finds out... I was pretty surprised at how that went down. Anyway, things get intense on a larger scale, and it's not just about our main couple. It was so cool to see how McLaughlin made the Steel Row/Bitter Hill war such a big part of the story, and how it affected everything Scotty did.

The climax and ending was a whirlwind of decisions, bloodshed, and shock. There was a lot going on in the end, both good and bad. I was a tiny bit sad at first, but reading the epilogue made me feel better. I do like the ending and it's very worthy of the struggle and the pain and the passion of the story before the ending. I'm happy with how Scotty and Skylar's HEA came to be.

There was nothing really major that I didn't like about the book, just some minor things. I really thought the author could have went a little easier on Scotty (he's banged up a lot, in this book). Scotty is such a good guy but he always seemed to be getting the short end of the stick.

I also think there could have been a little more variety in the sex scenes? Is that weird for me to say? They seemed to follow the same pattern. I loved the varying intensity (some were definitely more lusty than others, though all of the scenes were pretty fiery), but the physical acts were pretty much the same. I don't know why I feel awkward typing this.

I highly recommend this series in general. It's a great romance series but there is so much more than just the romance. The crime and the gangs and all of the high stakes and sneaking around and double-crossing gets really intense, really quickly. All three books are very engrossing, and hot. Dare to Lie does not disappoint!

3.5 stars -> rounded up to 4 stars. I liked this book but I liked Dare to Run more, and I wasn't totally crazy about this one overall. I liked it but it's not a new favorite. I'm going to be really disappointed if this is indeed the final book in the series! I had hoped that we would get to read Tate's story, or maybe Marco's... who knows!