Hi friends! Today is my day for the blog tour for Highland Vixen, a book that I really enjoyed. Check out this second novel in the awesome Highland Weddings series.

But first, the author has a message for readers!

Hummm….the truth is, I am nerd enough to think history is fun. All the little facts and laws from centuries ago have always fascinated me. My parents were always listening to me expound on some little bit of wonderment…aka…historical fact.

Working these little facts into my work is something I try to do because I believe it’s important to write a book, set in the time it is dated. It was a different time and I think that adds spice to the unfolding romance. Life wasn’t fair then and it isn’t now. There is nothing I love more than to set out to see a couple overcome the odds and live happily ever after.

At least I love it when it’s finished! When I’m in that bottom of the ninth inner point, it’s hair pulling time as I try and work things out. Yes, I know I’m the author and should know these things but honestly, these characters have minds of their own!

I hope you all enjoy Highland Vixen. 2017 hold three titles from my Highland Brides and yes, I make you wait for that moment when it all comes together but they are all brides after all. 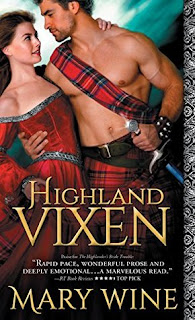 “I’ve no quarrel with me circumstances,” Helen responded. “I am grateful.”

Brenda’s face contorted with disgust. “Oh aye, we are both reduced to being grateful for having to run like a pair of rabbits from the places that should have been our homes. Men have no kindness in them.”

Brenda was the niece of the current laird of the Grants, and she was a rare beauty. Laird Grant had arranged a second marriage for her, and she’d run before being forced to the altar.

“That is all we are to men in the end. A tool to be utilized,” Brenda said. “Ailis is fortunate to have Bhaic’s love.”

“She is,” Helen agreed as the rain increased and they both drew their feet up.
Brenda’s words were haunting. Helen heard them well into the dark hours of the night, likely because the fairies and other night creatures enjoyed tormenting her by reminding her of her lot. Her simple life had shattered the moment she met Marcus MacPherson. He’d plucked her from her happy home as easily as he might a flower.

USA only, I believe! (So sorry, international friends.)