Review: Daughter of the Pirate King by Tricia Levenseller 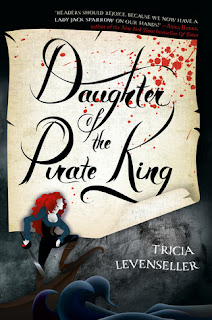 A 17-year-old pirate captain intentionally allows herself to get captured by enemy pirates in this thrilling YA adventure.

Sent on a mission to retrieve an ancient hidden map—the key to a legendary treasure trove—seventeen-year-old pirate captain Alosa deliberately allows herself to be captured by her enemies, giving her the perfect opportunity to search their ship.

More than a match for the ruthless pirate crew, Alosa has only one thing standing between her and the map: her captor, the unexpectedly clever and unfairly attractive first mate, Riden. But not to worry, for Alosa has a few tricks up her sleeve, and no lone pirate can stop the Daughter of the Pirate King.

Debut author Tricia Levenseller blends action, adventure, romance, and a little bit of magic into a thrilling YA pirate tale.

This was a really fun and entertaining read - exactly what I would hope for, from a story with pirates. Anytime you drop the word "pirate" in the title or synopsis, I'm going to except swashbuckling adventure, clever scheming, and a good dose of sneak thievery. I was not disappointed by this book!

Alosa is the daughter of the pirate king Kalligan. She's his only child (the only one he's claimed), which makes her very valuable. What people don't know is that she isn't a spoiled and pampered pirate princess - she is a cunning and dangerous pirate. When her father sends her on a mission to retrieve a part of a map, Alosa's plan is get captured willingly by a young pirate lord and search their ship for the piece of the map that the former pirate lord of that ship had. The captain, Draxen, is every bit as cruel and ruthless as his father was. But Alosa doesn't expect to be distracted by the captain's first mate and younger brother, Riden. Finding the piece of the map isn't going to be the difficult part of the task - getting around Riden will be.

From the start, this book set the tone of adventure and humor. Getting captured (willingly) might seem like gloom and doom, but Alosa is so entertaining. She is taken prisoner and her crew is freed. From the start, Alosa proves to be a handful. She is brazen and smart-mouthed, and she is feisty. She's spirited and unafraid to keep trying. She has a plan and she doesn't let obstacles get in her way of finding the map.

Much of the first half of the book is about Alosa's search for the map without getting caught. She is placed in the brig, but she cleverly lets herself out of the prison at night to search the ship. But she is caught several times by Riden, the first mate. He is very suspicious of her, but he finds her entertaining and hot-tempered. Between him and the captain, he is more merciful, but he makes it very difficult for her to search the ship at will.

I adored Alosa! She is so spirited and she is a fighter. She has been hardened by her father's tutelage, and she proves herself to be a capable and clever pirate, over and over. She's a fierce and wonderful heroine, and she relies on no one to save her but herself. This book has a light and fun current to it, but it's also incredibly empowering and feminist in a subtle way.

I also really liked Riden. We can see that Draxen, his older brother and captain of the ship that, is greedy and ruthless pirate. But Riden is much more merciful and wicked, with a conscious and a clever brain. He is very observant and learns a lot about Alosa by watching her and observing her. I like how he understands and reads her so well, even after only weeks of knowing her.

Initially I thought the romance would be weird, because how on earth would Alosa fall for a pirate that took part of her capture. But Alosa and Riden sort of become friends. Almost every time she let herself out of the brig, he catches her, which leads to some sort of hilarious back-and-forth banter. He visits her in the brig and talks to her - the purpose being to extract information about the pirate king from her - but they each learn a lot about each other. And there is a lot of banter and bicker, especially on Alosa's part. As the story goes on, it's clear that at least in terms of their relationship, it's less of prisoner-captor, and something else. Riden begins to help Alosa, both directly and indirectly.

It was adorable, watching them fall for each other. The chemistry between them is suuuuuuper swoony, fan-yourself-worthy, and tangible. Every time the scene included the two of them, I started to expect two things: banter, and serious tension. I was almost never disappointed, especially as the story went on. Whew!

But I liked that the author didn't develop the romance too quickly. Neither character is at the "I-love-you" stage. Both have pretty strong feelings for each other, and there are a few makeout scenes, but their relationship doesn't progress too quickly and it doesn't get too heavy. Yet? There is another book to follow this one.

There are several twists and turns to the story! You think it's just about Alosa finding a map piece for her father? Nope! I can't say more because of spoilers, but we learn key things about Alosa, and another pirate lord, and Riden and Draxen, as the story progresses.

The ending is pretty good, in terms of how it wraps up. There isn't a cliffhanger, but it is clear that the story must (should) continue. I think this is a two-book series, which sounds good to me! I love the duology trend in YA publishing these days.

I don't have any specific dislikes, though I suppose I would have loved for this story to keep going! The end was a little bit abrupt. Hopefully book two picks up exactly where book one finishes.

I'd recommend this book! It's not an omg-new-favorite, but it's really enjoyable and definitely not disappointing. I wanted a fun, entertaining pirate-based story and I got exactly that (and a little more). I really liked the strong female protagonist and the clever and charming male protagonist, and the story was very entertaining. If you're looking for a captivating adventure on the sea, look no further!

4 stars. I am looking forward to reading the second book! I'm hoping for more "pirate stuff", especially concerning Alosa's father, more swoon (kissing! more kissing!), and more sticky situations for Alosa to clever wriggle out of. Levenseller is an author whose books I will be keeping an eye out for in the future!