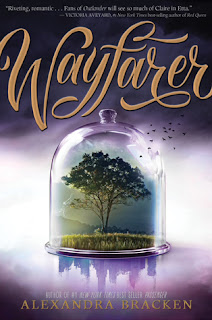 One-line summary: This book is every bit as fascinating, captivating, and thrilling as its predecessor, and a page-turning, satisfying conclusion to the series.

I was extremely excited when I received this book early for review, but also wary. It's a long book (500+ pages), and the story is at an intense point (from the end of Passenger). I was nervous to read Wayfarer, because there are so many ways that this book could end, and most of them are bittersweet (or just plain cruel). I'm so happy to say that Wayfarer was incredibly engrossing and it ended rather perfectly - Bracken found a way.

This book picks up a little after the end of Passenger. Nicholas and Etta have been separated in time and space. Etta wakes up as a captive of the Thorns, and she meets someone she never thought she'd know. She, Julian Ironwood, and the Thorns set out to secure the astrolabe from Cyrus Ironwood. Meanwhile, Nicholas and Sophia seek help from Rose Linden, only to be turned around several times. Looking for information, the pair accumulate a number of favors they must return. They meet Li Min, a mysterious and secretive traveler who helps them more than once. But Nicholas has one goal, and that is to find Etta. Sophia wants to find the astrolabe. And Li Min knows more than she is letting on.

I'm still reeling a little, so bear with me as I go about this review. I've just finished the book and I'm in a pleasant state of shock, partial numbness, and total satisfaction. This book... I don't remember my exact expectations, before starting it. Hoping that Nicholas and Etta would survive and be together? In any case, I'm so pleased by what was written, and its delivery.

One thing I do recommend is a reread of Passenger, or checking out some sort of spoiler-filled review or post. Bracken has a spoiler-y graphic available on her website. I wish I had reread Passenger, because besides the ending, I didn't remember a ton of specifics. The good thing was, as I continued to read Wayfarer, I realized that I didn't need to remember too many specifics, because more and more came back to me. At first though, not the case.

One of the best parts of this book was the character development and introduction/development of new and smaller characters that had no or little role in Passenger. For example, I thought Sophia played a bigger role in this book - an enormous role. She is the most important "secondary" character (arguably a primary character? She doesn't have a narrative in the books though). I understood and liked Sophia so much more, in this book. She seems ruthless and blunt and sometimes harsh, but she is so determined and driven. She is someone you want on your side, because she is a dirty fighter.

Julian Ironwood, Nicholas's half-brother, is another secondary character who quickly becomes very important in Wayfarer. He betrayed his grandfather and sought refuge with the Thorns, which is how he and Etta meet. When she wakes up, she tries to escape, and she runs into Julian. Julian is a coward and a runner, but we get to understand him better in this book. He is an idiot and a poor brother, but he learns this and matures a lot, over the course of this book.

I enjoyed the presence of Li Min and Henry Hemlock. I won't say much on either of them, but both are vastly important in this book, and play critical roles in pivotal points in the story. I didn't love or hate Li Min, but I adored Henry Hemlock. His interactions with Etta were wonderful.

Etta shows her fight and her tenacity in this book! She keeps moving, with grief, guilt, even pain weighing her down. She knows that Nicholas is out there, and she knows that the astrolabe must be found and taken out of the Ironwoods' grasp. Her goals are lofty but she never quits.

The same can be said about Nicholas. He wants to find Etta and never stops hunting for information and leads. He and Sophia travel to so many different places and times, and make various (terrible) deals for information, to find Etta. Finding the astrolabe is important but to Nicholas, finding Etta is everything. Nicholas has such a pure and good heart, such upstanding morals. He's a good guy who considers everything, weighs everything, and questions everything. I liked seeing how his mind worked, and I liked seeing him push through pain and doubt.

Etta and Nicholas are separated from much of the book, so I can't really say much about physical romance, but their relationship is strong through space and time. It's amazing how they never cease thinking about each other, hoping that the other is alright, and fighting for each other. They do interact at points toward the end of the book, I will say that.

I died emotionally no fewer than seventeen times while reading this book. There were times when I actually teared up (my Goodreads statuses are proof). There were some painful parts in this book! Bracken took me on an emotional roller coaster. But for the better!

I love the varying settings that Bracken takes us through! Between Etta and Nicholas, we are introduced to so many different times and places. The most interesting, in this book, was probably Carthage, 148 B.C. How intriguing!

By the climax of the book, you'll be wondering how on earth Bracken can end this book with something happy or positive. There seems to be no way, with certain revelations about the astrolabe, and a darker force that is at play, and certain deals with devils that are very unfair. But Bracken made the ending worth all of the anguish and agony! I promise.

I don't really have much to say here, other than I do wish there had been more Nicholas/Etta interaction! I don't want to spoil anything, but the romantic in me would have loved more interactions. Of any kind.

Not really a dislike, but I do recommend a Passenger reread, if that one isn't fresh. For example, I read Passenger over a year ago. A reread might have helped, at least initially. After a certain point in Wayfarer though, some things started to come back.

I highly recommend this book, and series! Time-traveling novels can be tricky, and very messy. I haven't read a ton of them, but one of my favorite series of all time happens to be a time-travel series - the Ruby Red trilogy by Kerstin Gier. I can safely add this Passenger duology to those ranks. This is a wonderful, fascinating, and imaginative series! With a very satisfying ending.

4.5 stars. I'm still trying to decide if to round up or down. But rest assured, I loved this book, all 532 pages of it. It is worth the full spectrum of emotions that I experienced! I look forward to reading more from Bracken in the future.