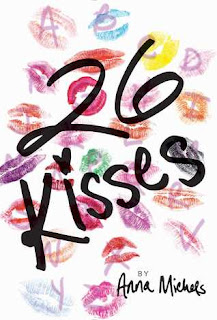 Kasie West meets Morgan Matson in this hilarious and heartwarming debut about a girl’s summer mission to get over her ex-boyfriend by kissing her way through the alphabet.

Getting dumped by her boyfriend is not how Veda planned on starting her summer. When Mark makes it clear that it’s over between them, Veda is heartbroken and humiliated—but, more importantly, she’s inspired. So she sets out on the love quest of a lifetime: use the summer to forget about Mark, to move on, and move up. All she has to do is kiss twenty-six boys with twenty-six different names—one for each letter of the alphabet.

From the top of the Ferris wheel at her hometown carnival to the sandy dunes of Lake Michigan, Veda takes every opportunity she can to add kisses (and boys) to her list, and soon the break-up doesn’t sting quite as much. But just when Veda thinks she has the whole kissing thing figured out, she meets someone who turns her world upside down.

You're probably thinking: Alyssa, why in the world would you read something like this?! You despite romances that are anything not binary. A girl kissing twenty-six guys? You're just TRYING to hate all YA contemporary, aren't you? Well, the thing is, this book came highly recommended to me by a fellow blogging peer, and she promised that there were no romantic feelings involved (with one exception) and that it was a cute book. While I definitely could have gone my whole life without reading this book, it wasn't terrible. Just... probably something I shouldn't have picked up.

Veda and Mark had been dating for years, but right after his high school graduation, he breaks up with her. So it's the summer between Veda's junior and senior year of high school, and she's heartbroken. Her friend Mel comes up with a plan to get her to forget about Mark: kiss twenty-six guys, one for each letter of the alphabet, in order. It can be any kind of kiss - from her, from him, and not necessarily on the lips. Veda hesitates but soon she decides the distraction is good for her. But she gets caught up in the challenge, and she also falls for a new guy... Veda doesn't plan for her developing feelings for him, and she'll have to decide if she is ready for a new relationship.

I enjoyed reading the book from Veda's narrative. I felt so bad for her, and I was cheering her on, as she worked towards completing the challenge. Most of the kisses were on the cheek, or on the wrist, or basically not on the lips. I think maybe four or five kisses were actual lip/tongue kisses, and that didn't bother me so much because she was drunk for two of them, and the rest (except one) clearly didn't mean anything.

I personally do not think it's the best idea to go around kissing anyone and everyone just for the heck of it. It will send the wrong message, and in this book, it did. See more on that below.

Part of me is torn because while I hated the twenty-six kisses challenge, I saw and understood how it helped Veda move on. It gave her focus and distraction from Mark, which she really needed, after the breakup. It helped her move on.

Falling for someone else expedited the process (of moving on) as well. Killian is from the town over, and he's working at Mel's dad's store with Mel and Veda. Killian is a sweet nerd who hates his town and high school. He and Veda get along really well, and hit it off immediately. Veda knows she's not ready for a relationship (she was just dumped by the boy she dated for years), but she discovers that she does want more from Killian.

I think that romance with Killian saved this book a little. The story started to slide down a slippery slope around two-thirds in, as the challenge started to catch up with Veda negatively. But Killian's patience and sweetness were things Veda needed, especially as she needed the time to figure out what she wanted. I'm glad she went through with the challenge, though I think it was wholly idiotic to begin with.

Overall, not bad, but not something I'd recommend or ever reread.

I kept saying this, but the whole challenge is absolutely dumb. Mel has no brain cells apparently; Veda never wanted to do this, but Mel suggested it and really bullied Veda into doing it. Friend? No. Mel... I don't know what to say about her. Clearly she's an idiot for thinking this challenge was a good idea, and clearly she's naive if she thought Veda would want to do it. Eventually Veda got into the game but she never really wanted to do it!

Did I mention that Veda is spineless? Because she is. She lets Mel, and her dad, and her brother Jeffrey, walk all over her.

People started calling Veda a slut, and while I do not think that's okay, I also don't think it's okay that Veda felt weird about kissing so many boys, and she kept doing it. On the lips, too! And then she acknowledges the fact that she likes Killian, and still kisses at least one more guy on the lips. Don't go looking for a reputation you don't want. What do you think is going to happen when you kiss one boy one day, another boy another day, etc., and you're kissing them like they're oxygen? Obviously other people are going to judge you (and the mean ones are going to call you a slut).

The drama in the last fourth of the book was too much for me. Veda got a little irrational, and an argument she had with Killian was so ridiculous. Both of them were out of line, but Killian is the one who has to apologize. No! It should have been both of them! Veda doesn't get a free pass/excuse because she just got out of a relationship.

I also don't think Veda was being fair to Killian, in continuing the kissing challenge. You see how I'm torn about that, right? On the one hand, the challenge was good for her, and helped her get over Mark. On the other hand, she falls for Killian, the two of them acknowledge the fact that they more than like each other, and yet, Veda still wants to kiss other guys. Even if those kisses mean nothing, the ones that get really heavy... it's like cheating on Killian, even if the two of you aren't in a committed relationship (yet). Yes, she owed him nothing at that point, but I think it's human decency to not keep kissing other people when you have an understanding with a guy?

Again, the drama in the ending of the book was ridiculous. And the actual ending, after the drama is resolved, is barely wrapped up. This book could have seriously benefited from an epilogue.

I sooooo do not recommend this book. Again, like I said in the early part of my review, this book wasn't terrible. But it's also not worth reading, even if you are a YA contemporary romance fan. I tried this book because it came highly recommend from a blogging friend who assured me of certain things, so I thought it wouldn't be that bad. I think my preferences in romance are a little tighter than hers (and that is okay!), hence why I ended up not enjoying this book.

2.5 stars -> rounded down to 2 stars. Maybe it's my age that is affecting this rating (I'm just out of my teen years) but I couldn't really understand the logic of some of these characters - i.e. the entire point of this book. At no point after starting the book did the twenty-six kisses challenge seem like a good idea (even if it did help Veda get over Mark)!