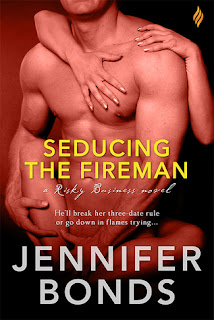 I absolutely love romance novels involving a man in uniform, and a firefighter is especially appealing. I loved book two of this series, Once Upon a Power Play, and I knew that I would enjoy this book. Jennifer Bonds has not disappointed me!

Jackson Hart stood up Becca Mancini ten years ago, leaving her waiting for him to go on their first date. He didn't mean to leave without saying good-bye, but Becca never heard why, and she assumed that he just wasn't interested. Ten years later, Jax is back in Brooklyn, one of New York's Bravest, a firefighter of the FDNY. And he's determined to have a second chance with Becca, to go on three dates with her. Becca hasn't forgotten that he abandoned her ten years ago, but she's finding out that just can't say no when it comes to him.

Jax is such a lovable hero! He's just a little arrogant, not enough to seem like a jerk, but he's really sweet and not a manwhore like many heroes in romance novels. He's confident and kind and totally selfless. He takes his job extremely seriously, driven by a tragic past. I liked seeing Jax's vulnerable side, as well as his charming and sexy side. And boy is he charming and sexy. It comes with the territory - firefighters make great romance heroes for many good reasons. *fans self*

It took me a little bit to warm up to Becca, because at first it seemed like she was going to be a jerk to Jax the whole time. If course, she was stood up by him, so I understand her anger. But Jax begins to wear down her resistance, and she forgives him (and then some). Becca is feisty and not easily pushed around, but she's also a little awkward and (when she wants to be) kind.

If there is one thing that Bonds does really well in her books, it is cook up some seriously hot chemistry, and steamy scenes too. The chemistry and foreplay aspects of her books are so sizzly! As are the steamy adult scenes. I've only read two of Bonds' books but I can tell that she'll be a go-to author for hot romances with likable characters.

On that note, I'd like to mention the depth that Bonds gives to all of her characters. In Once Upon a Power Play, Bonds went deep into the head of a (sexy) hockey player, revealing fears and insecurities that come with the profession and fame. In this book, Bonds does the same, but for the fireman profession. Jax is not just a sexy man with lots of muscles and a glamorous job. I love how we get to see turmoil and effects from his job.

Hot chemistry, steamy scenes, great romance, wonderful characters - what more could you ask for, in a romance novel? The ending is really sweet, and is actually low on the drama at the climax of the book. I appreciated that! This book was lovely, overall.

One small thing - like I said above, it took some time for me to like Becca. I know that Jax hurt her ten years ago, but in the very beginning, I thought Becca was being unreasonable. As the book went on though, she became more amicable. I liked her overall!

If you enjoy romance novels, or specifically Brazen romance novels, I really recommend this one (or Once Upon a Power Play!). I know I'm officially hooked on Bonds' books! I hope she has more with Brazen to be published in the future.

4.5 stars -> 4 stars (I'm being picky). I really enjoyed this story! I can't wait to read more from the author. She's definitely on my auto-read list!