Review: The Vanishing Throne by Elizabeth May 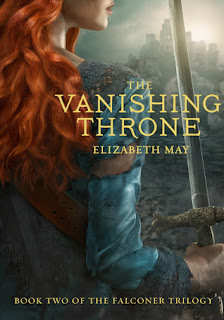 The second book in the Falconer trilogy is packed with surprises and suspense.

Aileana Kameron, the Falconer, disappeared through the portal that she was trying to close forever. Now she wakes up in the fae world, trapped and tortured by the evil Lonnrach. With the help of an unexpected ally, Aileana re-enters the human world, only to find everything irrevocably changed. Edinburgh has been destroyed, and the few human survivors are living in an uneasy truce with the fae, while both worlds are in danger of disappearing altogether. Aileana holds the key to saving both worlds, but in order to do so she must awaken her latent Falconer powers. And the price of doing that might be her life.

Rich with imaginative detail, action, fae lore, and romance, The Vanishing Throne is a thrilling sequel to The Falconer.

For the year of 2016, out of 57 books read, only four have received a five-star rating from me... this will be the fifth. I don't use the five-star rating a lot - it's pretty rare that a book hits me upside the head with its magnificence. Seriously, I don't really fall in love with books; I'll really enjoy them, or like them, but lovelovelove? I reserve the five-star rating for those types, and they are few and far between.

This is one of those books.

And it's a sequel! Generally I haaaate the sequel of a trilogy (the second book). Sequel slump is a very common problem in YA trilogies (and series in general). But not so, in this series. I went into this book knowing two things: 1) my UK friends who had already read this book in November 2015 absolutely loved it, and 2) those same UK friends warned me of a cliffhanger ending (but that's all I knew - that the ending would be somewhat cliffhanger-y). So I was pretty wary, going in. As it would turn out, I had every right to be wary, but I really enjoyed the book!

Aileana Kameron wakes up to find herself trapped in the fae world, a place of inbetween, imprisoned by Lonnrach. Time moves differently in this place, and Lonnrach... he is intent on gathering information from Aileana's memories. When Aileana is rescued and brought back to the human world, she discovers two things: she's been in the fae world for three years, and the human world has been completely destroyed by Lonnrach. Few survived, and the humans that did are in the pixie kingdom, with some familiar faces. Aileana must awaken her Falconer powers and find a mysterious crystal that Lonnrach is looking for, before he finds it. If he finds it, the consequences will be detrimental for both human and fae.

Elizabeth May has clearly mastered many things when it comes to writing, but I must say, the character development sticks out to me. May takes Aileana on a fierce and cruel and painful and emotional journey. While she is imprisoned by Lonnrach, she is tortured by him, and she can't fight it. Aileana is convinced that this is her punishment for not ending things, at the end of book one. When Aileana escapes with the help of a new friend, Aileana blames herself for the state of the human world. She isn't broken, but she is devastated. The author has Aileana undergo a great deal of character development. Already was Aileana a strong and capable heroine, but she has a contained rage and strength that builds as the book goes on.

The first, hmm, twenty percent or so of the book broke my heart. I hated seeing Aileana imprisoned, and seeing what Lonnrach was doing to her. He rifled through her memories without her permission, over and over, and it was painful and distressing and damaging. Aileana escaped with an exhaustion but also a hatred and a burning urge to slaughter Lonnrach. Good for her!

After Aileana escapes with her new friend, she is taken to a familiar face... Kiaran. If I liked the faerie in book one, I adored him, in this book. Cracks are showing in his emotionless exterior. He's new at letting emotions through, and it's kind of adorable. There is a scene when he and Aileana are reunited, and she needs comforting, and he attempts to hug her to comfort her... so cute. That scene is one of my favorites. Ahhh, Kiaran. We learn a lot about him in this book - he is Kadamach, and Kadamach has quite the past.

Secondary characters that were very important - Derrick (bubbly and excitable as ever), Aithinne (this is Kiaran's sister - I like her so much!), Gavin (ew, he is so different from book one, and not in good ways), Catherine (okay I like her so much more now). Three years passed in the human world since Aileana was taken, so Gavin, Catherine, and the other humans are three years older (whereas Aileana is only a few months older than she was when she was taken), and they are different people. They had to adapt and survive the destruction of the human world, a world that no longer involves polite society and gentry and balls and servants.

I think that was one thing that really set this book apart from book one - the setting pretty much completely changes. Scotland - and all of Earth - has been destroyed by Lonnrach, from the end of book one. We're not dealing with snobby society ladies anymore, though we're still in 1800s Scotland. I liked this new post-apocalyptic setting. It is harsh and demanding, yet there is something real and valuable about everything, now the world as they once knew it is no more.

Okay, I'll talk about the romance now. No love triangle, no huge drama, only an upwards progression. Aileana and Kiaran have such a swoon-worthy relationship. I love how they're not quite sure of where they stand, when they are reunited in this book. And slowly, they rediscover and discover how important they are to each other, how much they care about each other, and how much they've missed each other. Kiaran saves Aileana many times, subconsciously; when she is imprisoned, she thinks about him. He's never far from her thoughts, and vice versa. Also, fun fact... their relationship, as beautiful and developed as it is, takes a steamy turn. Have I mentioned how much I love these two together? It's a thing of beauty, the two of them figuring out their relationship and feelings.

Character development, A+. Setting, A+. Romance, A+++. Plot, A+. I was never bored, and I was driven to keep reading. I finished this book in one sitting. When the last quarter of the book was upon me, I was filled with dread - I knew the cliffhanger ending was coming up, but everything leading up was going so perfectly! There were so many reveals of secrets and information, and so much was worked through, and I was loving how everything was connected to everything else.

But that ending came, and, well, it definitely is cliffhanger-y. But it's not nearly as bad as I expected. In fact, I would hesitate to call it "cruel"... I'm slightly scared to see how the beginning of book three will come about, because I know most of the characters will be very confused... anyway, the ending was not nearly as stressful as I'd expected. Still not a sunshine-and-rainbows ending, but one can't expect that, when it comes to a book-two-in-the-trilogy!

Ahh. I guess I could complain about the ending, but like I said, it really wasn't as bad as I expected. I knew what I was expecting and it would have been much worse. So there's that!

I highly highly highly recommend this book! It's even better than book one, and I really liked The Falconer. I rarely give books five stars - and even rarer do I give a book two/sequel five stars, so believe me when I say that this book is worth reading. The entire trilogy is worth reading. I could see this being an all-time favorite series (assuming we get a HEA at the end of book three...). If you like historical fiction heavily laced with paranormal/fantasy but also a swoony romance... *nudges*

4.5 stars -> rounded up to 5 stars. Even though the ending was cliffhanger-y and I'll be in agony waiting for book three (do we think the UK publication date will be during 2016? Because I'll buy the UK version in a heartbeat), I totally want to reread this book already!