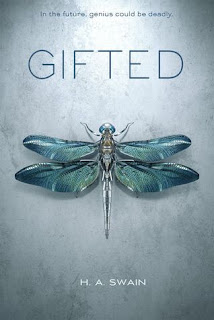 In Orpheus Chanson's world, geniuses and prodigies are no longer born or honed through hard work. Instead, procedures to induce Acquired Savant Abilities (ASAs) are now purchased by the privileged. And Orpheus's father holds the copyright to the ASA procedure.

Zimri Robinson, a natural musical prodigy, is a "plebe"--a worker at the enormous warehouse that supplies an on-line marketplace that has supplanted all commerce. Her grueling schedule and her grandmother's illness can't keep her from making music--even if it is illegal.

Orpheus and Zimri are not supposed to meet. He is meant for greatness; she is not. But sometimes, rules are meant to be broken. Here is a thriller, love story, and social experiment that readers will find gripping--and terrifying.

This book surprised me! I have yet to see any of my blogging and reviewing peers read this book, and when I received it several months ago, I didn't know much about it. I was going into this story with a clean slate, which is sometimes the best way to experience a story. While some general ideas of the story are not unique to this book, the story was very enjoyable and I couldn't put it down, even until the ending.

Zimri is a "plebe", a warehouse worker who lives with her grandmother. Zimri has a great voice, but in this world, no one is legally allowed to sing patented songs. But Zimri is determined to make music, and interrupt LiveStreams of concerts and radio streams is certainly one way to do it. Orpheus Hanson is a "Plute" and the son of Harold Hanson, who created Acquired Savant Abilities. ASA is purchased by the rich, and once the surgery is done, you wake up with a newly acquired ability. Hanson has control over the music industry, as most musicians have a music ASA (and Hanson has control over the profits made by those with ASA). Orpheus hasn't received an ASA, and he's not sure he wants one. But his father wants him to have the surgery so that Orpheus will be ready to take over the company. Orpheus and Zimri are on two ends of the social spectrum (Plute and Plebe), and their lives were never supposed to intersect. But together, they could change society forever.

This is a science fiction thriller, which I don't think I was expecting! Granted, I didn't really read the synopsis (or if I had in the past, it was a long time ago and I forgot about it), and somehow I thought this was a fantasy novel. I love science fiction, and thrillers, and so this novel was right up my alley.

The idea of this story isn't unique; we have this surgery that will make you really good at one thing (music, physics, writing, etc.), or perhaps two things (if you have the money). The Plutes are the elite that can get the ASA surgery, and they are celebrities and frivolous people. The Plutes are the ones that work in warehouses and poor fringes of the city, scraping by. The Plutes can't afford the ASA surgery, and many are not familiar with it. But everyone is familiar with Hanson's monopoly on music, and how singing and recreating music that is patented is totally illegal.

The story is told from both Zimri and Orpheus's POV, first-person, alternating chapter to chapter. I really liked both characters! Zimri is reckless and unafraid of getting caught singing. She isn't a revolutionary, though her actions would make you think so. Orpheus is, at first, naive and frivolous like the other Plutes. When his father tries to force the ASA surgery on him, Orpheus runs away, and starts to work at a warehouse - which is how he meets Zimri. Orpheus develops noticeably, growing from a carefree rich boy to a hard-working man. He's always been kind and charming and magnetic, but as the story goes on, he sees how his Plute lifestyle was ridiculous.

There is a lot of depth to both characters and their backstory. Zimri's story is told incrementally; at first we don't fully learn what happened to her father, and her mother, and what is happening with her grandmother. I like how information is gradually released, in a way that made the story flow better and make sense. The same goes for Orpheus's backstory - we don't learn everything about him in the beginning, and I think the story in general had more depth because of this setup.

While the beginning was excruciatingly slow, the story picks up nicely and really gains steam. The climax was incredibly exciting and also terrifying! The story had been bumping along pretty smoothly and interestingly and then the climax popped up, and I was biting my nails! Well done by Swain there. As you can probably guess, the rising action of this book deals with a revolution that is taking place, one that eventually involves Zimri and Orpheus. This isn't a new concept but I liked its presence in this story.

There is no love triangle. At first, it seems like Zimri and Orpheus won't be a couple, because there are secondary characters who seem to be into each of them (in Zimri's case, Zimri's best friend since childhood; in Orpheus's case, a rising starlet that has just had the ASA surgery, who would help his image). In any case, neither Zimri nor Orpheus like those people back (no feelings reciprocated), and when they (Zimri and Orpheus) meet each other, it's all Zimri & Orpheus from there. So, no love triangle, or anything of the sort. Zimri and Orpheus are super cute together! I like that Orpheus isn't an arrogant a**hole, and Zimri isn't a predictably snarky, feisty girl. Orpheus is kind and sweet and subtly protective, and Zimri is strong and tough but in a quiet way.

Overall, I was pleasantly surprised by this book! A weird take on surgically developing abilities, and how one person/entity can control everything. I'm not sure what drew me to this book months ago when I requested it, but I'm glad I decided to give it a shot!

I think my one complaint, and therefore, my biggest complaint, lies with the beginning of the book. If anyone saw my Goodreads, you'd see that I started this book on a Sunday and finished on a Tuesday night. That's actually a really long time for me to be reading a book - and I was supposed to have the review up on Monday. And I had only managed to read the first twenty pages on Sunday, nothing on Monday. The beginning is sooooo boring. I reread the first two chapters several times, and kept having to put the book down. Mentally, I just wasn't interested in continuing the story. Of course, I wouldn't ever not finish the book, and I certainly am glad that I kept reading (this is why I don't DNF!). But the beginning is very slow and very boring, and I could see others DNFing at that point, because of the slow beginning.

This book is perfect for those who like a mix of science fiction, thriller, and a cute romance. It's a standalone so all of your feels are taken for a ride within the book. I liked the ending a lot, and the book in general.

3.5 stars -> rounded up to 4 stars. This doesn't seem to be particularly well-known or popular in my circles of the book blogosphere, but I really enjoyed the book! It's at least worth the read, if you're interested. I haven't read anything else by this author, but I will keep an eye out in the future!

USA residents: win one of ten copies! Hurry!
Posted by Alyssa at 12:00 AM