Review: The Hunt by Megan Shepherd 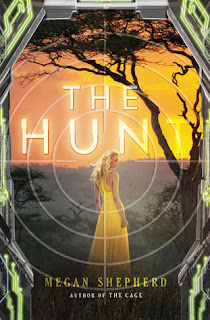 The Hunt by Megan Shepherd
Book Two of The Cage series
Publisher: Balzer + Bray
Publication Date: May 24, 2016
Rating: 4 stars
Source: eARC from Edelweiss
Summary (from Goodreads):
They’ve left the cage—but they’re not free yet.
After their failed escape attempt, Cora, Lucky, and Mali have been demoted to the lowest level of human captives and placed in a safari-themed environment called the Hunt, along with wild animals and other human outcasts. They must serve new Kindred masters—Cora as a lounge singer, Lucky as an animal wrangler, and Mali as a safari guide—and follow new rules or face dangerous consequences. Meanwhile, Nok and Rolf have been moved into an enormous dollhouse, observed around the clock by Kindred scientists interested in Nok’s pregnancy. And Leon, the only one who successfully escaped, has teamed up with villainous Mosca black-market traders.
The former inhabitants of the Cage are threatened on all fronts—and maybe worst of all, one of the Hunt’s Kindred safari guests begins to play a twisted game of cat and mouse with Cora. Separated and constantly under watch, she and the others must struggle to stay alive, never mind find a way back to each other. When Cassian secretly offers to train Cora to develop her psychic abilities—to prove the worthiness of humanity in a series of tests called the Gauntlet—she’ll have to decide fast if she dares to trust the Kindred who betrayed her, or if she can forge her own way to freedom.
What I Liked:

In my opinion, this is Shepherd's best published book. I gave all of her other books three stars each, my absolute least favorite probably being Her Dark Curiosity (gosh that book was a mess). I liked The Cage more than I liked any of her debut trilogy's books, but I didn't connected with the characters. I'm not sure what it is about Shepherd's books that keep me coming back, but in this case, I don't regret it. The Hunt is my favorite Shepherd book, and her best to date.
At the end of The Cage, Cora and the other humans tried to escape from the Cage, but they failed. Now split up, they must survive the horror in front of them. Cora is taken to a menagerie called The Hunt, where she sings. Lucky is placed an animal wrangler at the menagerie. Pregnant Nok and Rolf are taken to a facility where they are watched 24/7 by the Kindred, who want to see how typical humans raise a baby. Leon escaped successfully, and has pledged himself to work for a dangerous Mosca. Cora has been working with Cassian to strengthen her telekinetic abilities, in order to enter a game that might free the humans. Cassian is no longer a foe to worry about - the dangers outside the Cage are much greater than Cora and the other humans imagined.
This book is written in the perspectives of the different humans that we met in book one. Specifically, Cora, Lucky, Leon, Mali, Rolf. Usually I don't like multiple POVs (more than two, meaning), because authors tend to scatter events and interrupt key scenes and it's just too much going on. But I really liked how the author crafted this story, with the POVs she decided to include. All of them are in third-person. Cora is clearly the most important protagonist, but I think each of the other POVs were just as necessary.
I felt like I connected with the characters, in this book! That was one of my complaints abut The Cage. I liked Cora in this book; she is determined and willful and a fighter, and she is willing to do just about anything to get back to Earth. Lucky wasn't my favorite in book one, but I liked him more in this book. I felt like I understood him more.
Leon seems like a changed and better person, in this book. He takes on a rather noble and brave role, and I like the progression of his character development. Rolf and Nok's plot aren't as important as the plot of the other characters (it's pretty much just two plots, with Rolf and Nok being the second separate one), but towards the end, their roles are significant. We get a few chapters in Mali's POV; she is a strange one, but I like her.
Cassian is entirely redeemed, in my opinion. I feel bad for him, in this book. It's clear that he is working extremely hard to give Cora and the humans a chance to become an equal race in the eyes of the Kindred and the other species that treat humans like slaves and animals. Cassian is like a revolutionary, yet Cora and the others struggle to trust him. Cora's case is a little different because she has feelings for him and had felt personally betrayed by him in book one. But no matter - she seems him differently in this book.
One thing I really liked was how focused Cora was on getting back to Earth. She's focused on honing her abilities so that she will be strong enough to compete in the Gauntlet. She isn't letting her emotions get the best of her - the romance in this book is not at the forefront of everything.
But I can't go through this entire review and not talking about the romance. In my review of The Cage, I talked about how a love triangle was forming. The love triangle starts and ends with that book, for the most part. Lucky cares about Cora a lot, but it's clear that Cora does not return his feelings the way he wants her to. Cora has feelings for Cassian, and this scares her, because he is a Kindred, one of a species that she hates. But she can't hate him. Cassian loves Cora, which is pretty rare for the Kindred. I'm rooting for these two! Not in a Team Cassian kind of way, but in a way such that I want them to have a happy ending together, even though they are human and Kindred.
Have I mentioned how cool (and disturbing) I find the science aspect? The Kindred, the Mosca, and other species are all alien species. The Kindred are really advanced, and super smart, and really good-looking, and not entirely human-looking. They have abilities beyond telekinesis and telecommunication, and they are "superior" to humans (not all of them think that way). Cora and the other humans are stuck galaxies away from Earth, with the Kindred and the Mosca and other alien species, in a place where humans are not treated, well, humanely.
Betrayals, epiphanies, deaths, steamy kisses - this book had it all. This didn't seem like on of Shepherd's books, from what I'm used to! I really enjoyed the story. The ending is pretty wide open, though I hesitate to call it a cliffhanger. I am very anxious to read book three! Shepherd sets up the scene perfectly for book three - I can see how things will shape up!
What I Did Not Like:

The beginning of the book is pretty slow - maybe the first fourth of the book. It took me a bit to get into the story, but once I was hooked, I couldn't stop reading.
I feel a little for Lucky, because it was always clear that Cora didn't want him like he wanted her? Their friendship is pretty important in this book, and I think they have a nice relationship, but as friends. Still, I could see how there could have been a love triangle (it's not happening though). I wish Lucky could just fall for someone else! So frustrating.
Would I Recommend It:


I'm not sure how to make this call, because this is my first Shepherd book that I've given more than 3.5 stars (and I've read five of five Shepherd books). If you read The Cage, you should definitely read this sequel - The Hunt is (even) better. But if you haven't read book one, maybe don't start the series. I have a good feeling about this series though!
Rating:


3.5 stars -> rounded up to 4 stars. I'm impressed with this book! I honestly wasn't expecting to like it as much as I did. It almost didn't feel like a Shepherd book (though it undoubtedly was). I definitely will be reading the conclusion to this series! This series is much better than Shepherd's debut trilogy.

Author Website | Goodreads | Amazon | Barnes and Noble
Was this review helpful? Please let me know in the comments section!
Posted by Alyssa at 12:00 AM