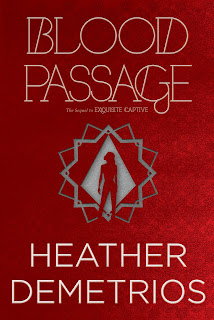 A jinni who's lost everything.

A master with nothing to lose.

A revolutionary with everything to gain.

When Nalia arrives in Morocco to fulfil Malek's third and final wish she's not expecting it to be easy. Though Nalia is free from the shackles that once bound her to Malek as his slave, she's in more danger than ever before.

Meanwhile, Malek's past returns with a vengeance as he confronts the darkness within himself, and Raif must decide what's more important: his love for Nalia, or his devotion to the cause of Arjinnan freedom.

Set upon by powerful forces that threaten to break her, Nalia encounters unexpected allies and discovers that her survival depends on the very things she thought made her weak. From the souks of Marrakech to the dunes of the Sahara, The Arabian Nights come to life in this dazzling second installment of the Dark Caravan Cycle.

First, let us take a moment to mourn the fallen soldier that was Blood Passage's original cover (which you can see HERE), as well as Exquisite Captive's original cover (HERE). I don't dislike these new covers, but unfortunately, I much prefer the original ones. Bad publisher!

Anyway, moving on. I so loved this book! WOW I did not expect to love this book as much as I did. Keep it up and this series will be an all-time favorite. I adored Exquisite Captive (I was one of the few that didn't really see a love triangle, so the romance didn't mar anything for me), and I think I'm even more in love with Blood Passage. Huge bonus - the ending of this one isn't some terrible cliffhanger that makes me want to throw something! YAY!

Nalia, Raif, Zanari, and Malek arrive in Morocco in search of Solomon's sigil. Malek used his third wish from Nalia for her to find the ring, but Raif and Zanari are determined to obtain the ring as soon as Nalia takes them to the location. But they have no idea what they're up against, and they'll meet both friend and foe in the desert. Finding the ring is a matter of life or death - for everyone.

This book was an emotional rollercoaster! I don't even know where to begin. I have to start by saying that I simply could not put this book down. Once I opened it, I didn't stop reading until I finished it, several hours later. It was that engrossing and exciting! Nonstop action and threats and new twists.

When I say "emotional rollercoaster", I mean it. I don't want to say anything too specific, but several key events in this book rips Nalia apart. Nalia lashes out, pushes Raif away, pulls him close, pushes Zanari away... there is a lot going on. I wouldn't call it "drama" because it's some serious consequences that everyone has to deal with. But I love how the author makes Nalia suffer a little - it does so much for her character. Nalia is infinitely stronger, by the end of this book, and in many different ways.

This book is written in third person, but we get to see the perspectives of all four lead characters - Nalia, Raif, Zanari, and Malek. While Raif and Nalia's perspectives were my favorites, I really enjoyed Zanari's as well. She is so tough and kickbutt, unafraid and sometimes harsh. She is also capable of great love and forgiveness, and I really liked seeing a softer side to her appear, with a new character. So cute!

I can't believe I'm saying this, but I am glad that the author included Malek's perspective, and made it about as important as the other three lead characters' perspectives. I do not like Malek at all, as a person OR as a love interest, but I understand him better. We get to see different sides of him; his history is very important in shaping the (terrible) person that he is today. While I still hate him as much as I did in Exquisite Captive, I like that Demetrios added such depth to his character. A redeemable villain, kind of.

So I liked Zanari's softer side, and Nalia's growing strength, and Malek's revealed past (still hate him) - and then there's Raif! I've always liked Raif the most, because of his fearless leadership and his determination, his focus. He is fire and steel and power, and a thousand times the man Malek is. I love how Raif never gave up in this book, even after a ton of certain things (that have nothing to do with Malek) makes Nalia push Raif away.

Okay fine, I'll get to the romance. I love the romance. There are at least three scenes that I can think of off the top of my head that are INCREDIBLY steamy, blush-worthy scenes between Raif and Nalia. I mean, I thought they were a fiery couple in Exquisite Captive? (Proof: Swoon Thursday #83.) Okay, sure. Times fifty suns. If you're lucky, I might share one of those scenes for my Swoon Thursday post this week!

But I also love how their relationship becomes so much deeper and more. I mentioned above that circumstances (that have nothing to do with Malek) makes Nalia push Raif (and everyone) away. But all of the obstacles make Nalia a stronger person, a stronger jinn, and it strengthens the love and bond between Raif and Nalia. I love what this sequel novel does to our lead couple; draws them apart and puts them back together, in a more solid, unshakable hold.

The love triangle is gone. That's all I'll say about Malek.

This book was thrilling, a bit terrifying at times (like, the nail-biting type), romantic, and vivid. Have I mentioned anything about the incredible imagery? The scenery seems lifelike, almost as if it were in front of me. Demetrios really paints the scene well, in Morocco, the desert, in the cave. And the jinn lore is so well-written - Demetrios has clearly done her research and knows her stuff.

The last thing I will gush about - NO PAINFUL CLIFFHANGER! While this book didn't end in a completely resolved way (there is one more novel, Freedom's Slave), the ending is in no way painful or unsatisfying. I can name SO MANY sequel novels of trilogies that ended so bitterly, and the wait for the final book was painful, and sometimes, I never ended up reading the final book (because I'd lost interest, thanks to the horrible ending). Thank goodness that isn't the case, with this book (and series). Okay I'll stop gushing now!

I actually can't quite think of anything I didn't like. There is one small something I want to mention but I wouldn't dare, because it's spoilery. But it was nothing that bothers me too much. And it resolves itself by the end of the book.

I so recommend this book! I can't recommend this series enough! Disregard anything you've heard about a love triangle - Malek's presence never really felt threatening to me, not in Exquisite Captive or Blood Passage, though it's obvious he's an attractive pardjinn. I am so pleased with this sequel, especially with the amount of Raif/Nalia we get, and how immense the greater conflict (defeating Calar and taking back Arjinna) has become. Bring on the showdown!

4.5 stars -> rounded down to 4 stars (I have my reasons, but really, this is a 4.5-star novel). If Freedom's Slave goes well, then this series will definitely be an all-time favorite (which is surprising for me, given that the romance isn't my usual exactly linear preference). I'm not totally upset about the cover change because this series is more than its covers - an amazing story that hopefully does really well.