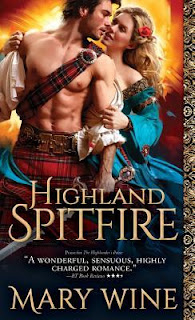 In the throes of fierce clan wars, the Queen's Regent tricks the children of two feuding lairds into a desperate choice: marry or die. The union—however reluctant—of a MacPherson and a Robertson could end three generations of hostilities between the two families.

Ailis Robertson wanted a husband, not a savage. But she is overwhelmed by the intense passion she feels for Bhaic—who is likewise taken aback by the agony he experiences when he thinks of losing Ailis. Is it possible for fierce enemies to become ardent lovers?

First thing - I absolutely love that cover! I know the cover is a separate thing from the actual story, but I love it when a cover is beautiful AND the story is amazing! Seriously, that is a cover worth having on your shelves, and a story worth reading. Double the win!

The Earl of Morton threatens two of the feuding clans of the Highlands: ensure peace between the clans, or there will be a bloodbath. Ailis Robertson, daughter of the Robertson clan leader, and Bhiac MacPherson, son and heir of the MacPherson clan leader, agree to marry, to save the bloodshed. Neither wants the marriage, and Ailis doesn't want to live on MacPherson lands. While the passion and chemistry between the pair boils over, will they be able to put aside their old ways of thinking, and be happy together?

I am a huge fan of Highlanders, Highlands, Scottish romance, etc., but I don't read nearly enough of them. I'm also a huge fan of marriage of convenience romance books. So I knew this book would be right up my alley. The gorgeous cover did not hurt one bit!

Talk about authenticity and world-building - the setting of this book was well written and well researched! Also it was different and lovely to see the Scottish accents so clearly spoken in this book. I got used to it after a while and I really liked this!

From the start, I liked Ailis. I've struggled a bit with the female protagonists of the recent historical romance novels that I've read, but I had no trouble liking Ailis. She's tough and fierce, but not to the point where it's anachronistic. She knows when to defer to her father, and when the Queen's Regent orders her to marry Bhiac MacPherson, she hates it but does it to minimize bloodshed. Ailis has no desire to leave her clan, nor does she want to consummate the marriage. Ailis is truly the spitfire we expect from the book's title, but she is also sweet and naively innocent, which Bhiac adores.

Bhiac is a Highland warrior through and through. Ailis saw him as a savage at first - tall, thickly muscular, commanding, protective, every each the heir and Tanis of the MacPherson clan. Bhiac is one of the most honorable male protagonists I've "met", despite being a brutish, brawny Highland prince (of a sort). He feels just as trapped as Ailis, and he never tries to force her to do anything, or exert his husband rights on her. He isn't forceful, though he does expect some behaviors from her. He is more interested in wooing her, in having a willing wife, than a submissive and miserable wife. I love Bhiac! He's a sweetie and a warrior.

The chemistry of this pair is off the charts! I wanted to get frustrated by the fact that it took FOREVER, over half the book, for the pair to consummate their marriage. BUT there were so many steamy non-sex scenes leading up to the big scene, and those scenes were scorching! I love that Bhiac and Ailis grow to trust and care for each other on their own time. It's clear that they are very attracted to each other, and this attraction spills over many times. And when they consummate their marriage, the steamy chemistry does not fizzle out.

This story is just as much a story of discovery and growth as it is a love story. Ailis has to adjust to living in the MacPherson castle, and Bhiac has to adjust to having a wife who (at first) does not want to consummate their marriage. I love watching them fall for each other, and eventually trust each other. I also love that it takes the whole book for them to fully give themselves to each other.

The conflict of this book isn't too threatening to Bhiac and Ailis's relationship, but it's fairly large and will carry over into the next book (I think the author is writing Marcus's book!). I am so pleased with the ending of this one! And I also really like how the author dropped in scenes that hint at the next book (Marcus and Helen, I hope), every now and then. I can't wait!

Our lead couple was interrupted while trying to do, um, THINGS, so many times! After the first few, it was hilarious, but then it got a tad bit annoying. Luckily by then, it was time, but still! It was comical and then I was like UM HELLO leave them alone to get their nasty on! It wasn't the worst thing in the world, but it bothered me a bit!

I highly recommend this book to historical romance fans! Especially if you enjoy Scottish romances. I've not read any of Mary Wine's previous books, but I'm sure this one will not disappoint fans. This is book one of a series (I think), and I can't wait to read more!

4 stars. I could see this being one of my top ten adult historical romance novels of 2016, eleven months from now! It took me by surprise, how much I loved this book. I'm glad I downloaded it on a whim! I hope to read more from this series very soon.