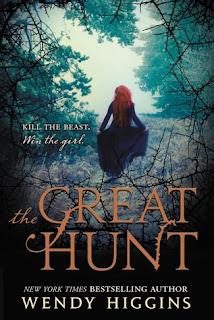 Kill the beast. Win the girl.

A strange beast stirs fear in the kingdom of Lochlanach, terrorizing towns with its brutality and hunger. In an act of desperation, a proclamation is sent to all of Eurona—kill the creature and win the ultimate prize: the daughter of King Lochson’s hand in marriage.

Princess Aerity understands her duty to the kingdom though it pains her to imagine marrying a stranger. It would be foolish to set her sights on any particular man in the great hunt, but when a brooding local hunter, Paxton Seabolt, catches her attention, there’s no denying the unspoken lure between them…or his mysterious resentment.

Paxton is not keen on marriage. Nor does he care much for spoiled royals and their arcane laws. He’s determined to keep his focus on the task at hand—ridding the kingdom of the beast and protecting his family—yet Princess Aerity continues to challenge his notions with her unpredictability and charm. But as past secrets collide with present desires, dire choices threaten everything Paxton holds dear.

Inspired by the Grimm Brothers’ tale, “The Singing Bone,” New York Times bestselling author Wendy Higgins delivers a dark fantasy filled with rugged hunters, romantic tension, outlawed magic, and a princess willing to risk all to save her people.

This is my first Wendy Higgins book, so I can't compare this one to her Sweet series, or her self-published novel. I can say that I was pretty pleased with this book, despite its crushing ending. (Sorry! It gutted me though.) What is holding me together (and making me not rate this book down) is the fact that this is book one of two, and I'm almost 90% confident in Higgins not to steer me wrong in terms of certain... things. I'm taking a leap of faith, I suppose.

Lochlanach is under attack, by a strange and dangerous beast that has been attacking at night, ripping soldiers and villagers to shreds. The king is desperate; with his oldest daughter's reluctant permission, he issues a proclamation that whichever hunter kills the beast will have his daughter's hand in marriage. Aerity always wanted to marry for love, but she knows the safety of her kingdom is more important. But she can't help falling for Paxton Seabolt, a mysterious, grumpy, brooding hunter who is bent on killing the beast to protect his family and Lochlanach (i.e. not for her). Paxton isn't all that he seems, but then, neither is the beast, or what is really going on in Lochlanach.

I've never read "The Singing Bone", but I have a huge copy of the works of the Grimm Brothers so I will definitely be reading it when I get the chance! I love fairy tale retellings, and I'm sure Higgins did a beautiful job of twisting the tale into her own story.

I thought the world-building was well-written! I love how this book starts - in a horrifying, eye-opening way. A true hook, in my opinion.

I also really like how important family is, in this book! The king has three kids (Aerity, Vixie, Donny), and his two younger sisters have an army of kids as well. The oldest cousin is Wyneth, who is one year older than Aerity, and whose betrothed was killed by the beast. Wyneth has been in mourning, but clear how much Aerity and Wyneth love each other and are best friends as well as cousins. Their friendship is so strong, throughout the book!

This book is written in third-person limited, so we get Aerity's third-person POV, and Paxton's. I liked Aerity, though at first I didn't really connect with her. She's a good person and a selfless princess. I love how much she cares about her family, and her kingdom. I liked Paxton almost immediately - grumpy, silent, and somewhat moody heroes are my favorite. Especially the ones who are noble and yet have something to hide! Paxton is a fierce hunter and a selfless, brave man. He and his younger brother, Tiern, enter the Hunt, but both are more concerned with killing the best than marrying the princess.

I have seen a lot of people struggle with the pacing, or the writing, but I personally didn't have any trouble reading this book. I'll admit, the beginning, after the first scene but before the hunters gathered for the Hunt, I had to muscle through a bit. But once the Hunt was called, I was zipping through this book.

The romance is so sweet! It's the slow-burn type, and kind of hate-to-love, which are two of my favorite tropes in romances. I say "kind of" hate-to-love because the attraction is instant, for both Aerity and Paxton, but Paxton is doing everything he can to avoid Aerity, and Aerity is convinced that Paxton does not like her. Nevertheless, I liked the romance; no love triangle, and it's a pretty straightforward romance, at least until the ending. You'll see my thoughts on the ending in the next section.

The climax of this book something that I both dreaded and looked forward to - and I got exactly what I was expecting. Higgins ups the ante, and she sets up a bigger picture for book two really well. Of course, I abhorred the ending (you'll understand why - vaguely - in the next section), but Higgins did a good job of writing the ending. The ending makes sense, even if I hated it.

Okay fine, I hated the ending. It's a huge cliffhanger, in terms of several different aspects. The Hunt has just gotten super complicated (trust me, this is VAGUE), a new player has entered the game, and the romance... oh my heart. Just thinking about the proclamation, and the whole premise of this book - you can probably figure out why I hate this ending in terms of the romance.

If this book ended with all of the OTHER cliffhanger aspects MINUS what happened in terms of the romance, then I would give this book five stars, hands down. But it's getting 3.5 stars - which I am willing to round up to 4 stars - because of that cliffhanger.

Despite the cliffhanger, I enjoyed the entire book. It's one of those cases in which I LOVED the book up until the ending. What's keeping me strong is that I'm pretty sure Higgins loves a good HEA, and she wouldn't have spent so much time in those two specific characters' heads otherwise... right?

Maybe wait until book two publishes, to binge-read the series. Man, I love duologies. Though the wait is still the same, for the next book, it's only one book to wait for!

3.5 stars -> rounded up to 4 stars. I'm hoping that there will be a good ending to the series! I think I trust Higgins with this HEA but... I'm pretty anxious now! Still, she has guaranteed at least one person who can't wait for the sequel, because of the ending of this book!