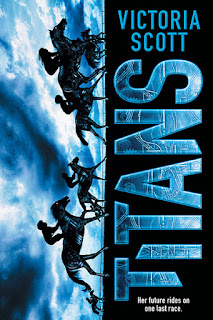 I must say, Victoria Scott writes books for me. I don't think I've been disappointed yet, and this is my sixth book I've read by her. There is something very refreshing about her writing style, and I'm pretty sure it accurately reflects her as a person. I adore the voice of Scott's characters, and the tone of all her books - humorous and heartwarming.

Astrid has always been fascinated with the Titans, but she knows that the closest she'll ever get to them is on the other side of the fence of the track, watching. Those who are rich can afford a Titan, as well as the fees to enter the Titan Races. But this year, the fifth year of the races, Astrid is offered the chance to race a first edition prototype of a Titan. Astrid needs the two-million-dollar prize money to help her family keep their home, as well as to help her best friend Magnolia's family. Can Astrid go the distance with the Titan? Or will she risk herself - her life - in the process?

The beginning of the story, before Astrid gets the opportunity with the Titan, was a bit slow. The author does an excellent job of setting the scene, the tone of the story, but I wanted the pace to move a little. When Astrid meets Rags, the older man with the old Titan, the story starts to pick up.

It's not long before Astrid is training on the Titan (nicknamed "Padlock"), and running in the preliminary and qualifying races. She needs to secure a sponsor, and she does, in the form of Lottie, who apparently knows Rags (and Barney, who is friends with Rags). This book goes through race after race, and each race gets more challenging and daunting and risky.

There are so many characters in this book, and I really liked nearly all of them. Astrid is bold and temperamental and stubborn. Magnolia, Astrid's best friend, is creative and fun. Rags, Astrid's manager, is grouchy and stubborn too. Barney, friend of Rags and former engineer of Titans, is good-humored and kind. Lottie, the sponsor, is honest and a paragon of class. Hart Riley II, one of the jockeys and competitors of Astrid, is hilarious and charming and wicked.

I adore Astrid and Magnolia's relationship! They are best friends, and this never wavers throughout the story. Magnolia and her family is just as badly off as Astrid's - Magnolia's father was also laid off, and they are close to losing their home. Yet Magnolia is determined to support Astrid while Astrid is training and racing. And Astrid is determined to win the races not only to get the money to help her own family, but also Magnolia's. This book has such a strong female friendship, which I really liked!

Speaking of relationships - there is little to no romance in this book. At least, not for Astrid. There are other characters that find some romance, but unfortunately, our main character is not one of them. You could take this as a positive aspect or a negative one! It'll appear as both, in my review. I like that Astrid stood on her own, in this story. But I also wouldn't have minded some romance.

I adored Padlock! And the Titans aspect in general. I personally haven't read anything with this concept before (I've seen some people compare this idea to The Scorpio Races? I've not read the book, so I wouldn't know). The author does an excellent job with the world-building, setting the scene, providing sufficient information about the mechanics of the steel horses. Padlock specifically is a wonderful fixture in the story.

I won't say more on the plot because this book is a standalone, and wraps up neatly, as a standalone might. I thought the ending was satisfying, like I said, wraps up neatly. I enjoyed the fast pace of the story, the races, the lovely characters, and the strong female friendship. As well as large secrets and intriguing history!

I already said this but I was kind of sad that there was no romance centering around Astrid! I mean, I think it's great that a story can stand without having romance; not every female character needs to have a man next to her (or whatever, so on). BUT, I thought for sure that the author was going to go in a certain direction, with Astrid and a secondary character. But she didn't, and I was honestly very disappointed. I think, maybe if this hadn't been insinuated at all, I wouldn't have been bothered by the "no romance" aspect. It's totally okay not to have romance in a book! But not okay if you imply it between two characters and then that doesn't actually happen.

I personally like all of Scott's books, and I think this one is probably among my favorites of hers, if not my favorite. I love that it is a standalone! No merciless ending or horrible waiting for the next book. The story stands on its own and was worth the read - especially in terms of the female friendship! I loved the amount of girl power in this book. I don't necessarily think this story is a must-read, but it won't disappoint!

3.5 stars -> rounded up to 4 stars. I love a story about a girl who overcomes all kind of odds and circumstances in order to walk among those who consider themselves her betters! I also love a story that keeps me guessing until the very end. Lovely work by the author!