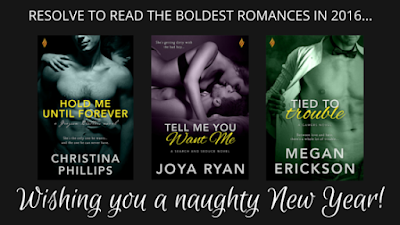 Forget the resolutions you're likely to break by making the one you're sure to accomplish with Brazen! Start the new year right with three daring, sexy new romance reads. Who needs cardio when these books are sure to get your heart racing?


Hold Me Until Forever by Christina Phillips 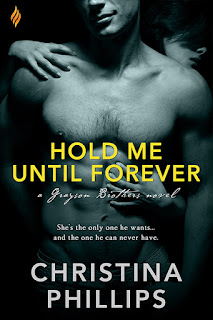 About Christina Phillips: Christina Phillips is an ex-pat Brit who now lives in sunny Western Australia with her high school sweetheart and their family. She enjoys writing paranormal, historical and contemporary romance where the stories sizzle and the heroine brings her hero to his knees.
She is a triple finalist in the 2013 ARRA Awards for Favorite Erotic Romance, and finalist in the 2012 ARRA Awards for Favorite Paranormal Romance. She is published by Entangled, Ellora’s Cave and Berkley Heat and has dipped her toe in the indie pubbed waters. She is a member of the Romance Writers of Australia, Romance Writers of America, the Dark Side Down Under Group blog and Historical Hearts Group blog. She helped establish the inaugural Professional Development for Authors program and has been a member of the editorial team for the RWA’s monthly newsletter, Hearts Talk. She loves hearing from her readers!
Christina is addicted to good coffee, expensive chocolate and bad boy heroes. She is also owned by three gorgeous cats who are convinced the universe revolves around their needs. They are not wrong.


Tell Me You Want Me by Joya Ryan 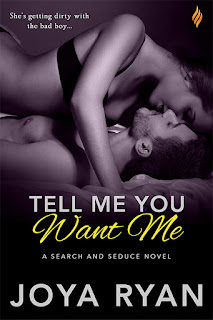 Determined to find her inner badass and save her business, boutique owner Michelle Ruby signs up for a twenty-four hour survival class. Except, she’s the only person who registered, and the guide is a sex-on-a-stick G.I. Joe come to life. Between his massive muscles, smoldering blue eyes, and “there’s no crying in camping” attitude, she’s in trouble…in more ways than one.


Search and rescue squad member Dex Young never thought he’d be roped into teaching “survival skills” to pageant queens. His sole student is upper class, upper state, and sexy as hell. And he has a sneaking suspicion that beneath her tight updo and designer jeans, there’s a sex kitten waiting to claw her way out.
But Dex knows women like her. Knows they only bring guys like him home to piss off their daddies. If it’s the bad boy experience she wants, she’ll get it. And Dex? Well, he can’t wait to find out just how dirty Michelle’s willing to get…


Find your copy of Tell Me You Want Me:
Amazon | B&N | iTunes | Kobo | Entangled | Goodreads

About Joya Ryan: National and international bestselling author Joya Ryan is the author of the Shattered series, which includes Break Me Slowly, Possess Me Slowly and Capture Me Slowly. She has also written the Sweet Torment series, which includes Breathe You In and Only You. She loves writing spicy Brazens which include The Chasing Love Series. Passionate about both cooking and dancing (despite not being too skilled at the latter), she loves spending time at home. She resides in California with her husband and her two sons.

Tied to Trouble by Megan Erickson 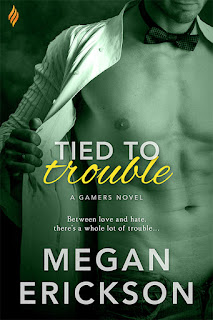 
Chad Lake only showed up at his sister's party for the free food, but when he spots an uptight nerd at the edge of the crowd, he can't resist trying to ruffle the guy's perfect bow tie and impeccable hair. The hottie’s ready for him, though, and in the end, it's Chad who's left wide-eyed, his ears still ringing with the filthy things Bow Tie whispered in his ear. No one gets the upper hand on Chad. Ever.
Owen Hawkins has heard all about the cocky Adonis from Chad’s sister—the same sister who holds Owen’s career advancement in her hands. He has every intention of steering clear of the other man…until Chad's sexy taunts push him too far. There’s something intriguing about Chad, and even though Owen knows that getting tangled up with the infuriating man is trouble, he can’t seem to stay away…

About Megan Erickson: Megan worked as a journalist covering real-life dramas before she decided she liked writing her own endings better and switched to fiction.


She lives in Pennsylvania with her husband, two kids and two cats. When she's not tapping away on her laptop, she's probably listening to the characters in her head who won't stop talking.