Review: The Rogue by Katharine Ashe 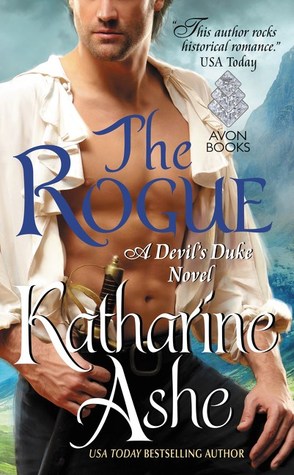 Lady Constance Read is independent, beautiful, and in need of a husband—now. The last man on earth she wants is the rogue who broke her heart six years ago, never mind that his kisses are scorching hot…

Evan Saint-André Sterling is rich, scarred, and finished with women—forever. He’s not about to lose his head over the bewitching beauty who once turned his life upside down.

But Constance needs a warrior, and Saint is the perfect man for the job. Only as a married woman can she penetrate Scotland’s most notorious secret society and bring a diabolical duke to justice. When Constance and Saint become allies—and passionate lovers—he’ll risk everything to protect the only woman he has ever loved.

This book was probably my most anticipated historical romance novel of Winter '16. I adore Katharine Ashe and her books - especially her Prince Catchers series - and I'm quite excited about this new series. This book was decently good, somewhat disappointing but not terrible.

Saint is a warrior, formerly in the military, now teaching others how to use a sword. He's the best swordsman in the region, better than anyone in Scotland and England. When he's hired to teach Lady Constance, a woman who broke his heart six years ago, he is going to refuse. She rejected him years ago! But six years ago, Constance had to. She's never forgotten Saint, after all these years. She wants him to teach her to fight, because she wants to be able to protect herself while she attempts to figure out who is killing young woman. Someone in one of Scotland's secret society is behind the murders, and Constance is going to find out who - with Saint's help.

Best part of this book was SAINT. Oh. My. Goodness. Saint is easily one of my favorite historical romance heroes, definitely in my top five at the very least. Saint is so complex and honest and noble and selfless and chivalrous and protective. He is kind and very, very intelligent. Usually the brooding types are a little cliche, but Saint is a strong, silent, brooding man, a man of few words. I adore his protectiveness, as well as his kindness.

Saint is not willing to teach Constance, at first, because he doesn't want to reopen old wounds. Years ago, they exchanged a few heated kisses which affected both of them very much. Six years later, Saint doesn't want to interact with her. But I love that he consents to teach her. I love how he is noble and gentlemanly about it, and insists on chaperones while he teaches her. He won't touch her, won't provoke her, but he has never stopped wanting her, after all the years.

Constance is part of the Falcons club, and she's been trying to pin the blame of the murder of innocent young girls on a duke. She thinks the duke, or whoever is responsible for the murders, is part of a secret society, and she needs to gain entrance to that society. But she can't do it without a husband. And she wants to be well-prepared. Saint teaching her how to use a sword, dagger, and hand-to-hand combat is beneficial, and Constance picks up the skills quickly. But she wants more from Saint than combat knowledge.

The secret society and finding the murderer story was very interesting, and had me very anxious. Katharine Ashe did a great job of building this part of the book! The mystery was well-written and I was highly engrossed.

Despite my obvious dislike for Constance, I LOVED the tension between her and Saint. The chemistry was sizzling! Six years did nothing to diminish Saint's feelings and attraction for her, and definitely vice versa (if anything, Constance wants him even more than before). There are some really steamy scenes in this book.

Another thing I liked, despite not really liking Constance, was how complex her character is, especially in terms of a deeply personal event that happened to her. Something terrible happened to her. Saint is a huge part of her regaining parts of herself that she lost; she trusts him, and he helps her learn to protect herself in more than one way. See? Saint is awesome. Saint is wonderful.

Overall, I'm pleased with this book. I definitely didn't like it as much as I hoped, but I think my expectations were too high. It was a good read though!

This is one of those books that, the more I think about it, the more I realized that I didn't enjoy it quite as much as I thought. You know when you finish a book and you're honestly SO relieved about the ending? That was why I originally rated this book more positively - the ending was very HEA-like. But... Constance kind of ruined the book for me, I'm realizing.

I never liked Constance, from the start. She really doesn't think about how her actions affects Saint - and when she does, she brushes it off, and doesn't care. Selfish much? I almost wanted her to end up alone.

The thing is, she's WAY too independent for this time period. Way too free. She has too much freedom and power, and it's probably because she's a member of the Falcon club, and she gathers information for the club. Her father knows, hence why she has so much "freedom" (her father uses her to get information). But her character just doesn't fit in this time period. She's too independent. Too modern. It goes beyond feisty. She doesn't know her place. I would LOVE Constance much more if she were a character in a twenty-first century adult romance novel (contemporary), not a nineteenth century (I think we're in the 1800s?) heroine.

She's a schemer and a strategist and she hurts Saint in the process. She wraps his life around hers but in a way that leaves him no choice. She basically turns him into her b****, and I felt bad for him. He's such a bada** warrior, taken with a lady who broke his heart years ago, and she's using him and taking advantage of him.

Honestly, as soon as she messed with Saint (directly or indirectly), I wasn't her biggest fan. And she's been messing with him for six years ago. She plays way too many games, she's way too scheming, and she takes advantage of Saint time after time. I don't like how she toyed with him, how she kept doing things that weren't fair to him. I won't say anything too specific, but you'll find it hard to like Constance. She had good moments though. I suppose people might like her BECAUSE of her scheming, but I didn't like how it made Saint feel.

Sooo... the heroine kind of ruined the book for me. AGAIN, if she were in modern-day contemporary romance novel, I would be her biggest fan. But as a heroine in a historical romance novel, I don't think she's an authentic and believable heroine, and I don't like her.

Even though I didn't like Constance, I actually do recommend this book, at least for Saint! I'd read this book again and again, if only to experience Saint's perspective, and all of the beautiful and kind and wicked things that he did. However, do NOT make this your first HR novel, for the newbies to HR. This isn't a must-read in general (for you veterans), though I wish it were.

3 stars. I'm kind of disappointed! Maybe my expectations were too high. I don't mind sassy heroines in historical romance novels, but Constance is completely anachronistic. I adore Saint and wish this book could have been a little more enjoyable if only for him. I do think I'll be reading the next book in the series, The Earl, despite misgivings.