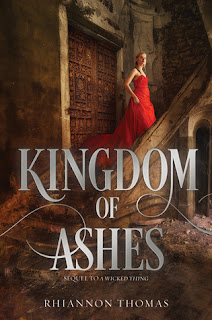 Asleep for a hundred years, awoken by a kiss, Aurora’s life was supposed to be a fairytale. But since discovering that loyalty to the crown and loyalty to her country are two very different things, Aurora knows she can only dream of happily ever after. Once the enchanted princess, savior of her people, she is now branded a traitor.

Aurora is determined to free her home from the king’s tyrannical rule, even if it means traveling across the sea to the kingdom of the handsome and devious Prince Finnegan—someone who seems to know far more about her magic than he should. However, Finnegan’s kingdom has perils of its own, and any help he gives Aurora will come at a price.

As Aurora and Finnegan work together to harness her power—something so fiery and dangerous that is as likely to destroy those close to Aurora as it is to save them—she begins to unravel the mysteries surrounding the curse that was placed on her over a century before…and uncover the truth about the destiny she was always meant to fulfill.

Brimming with captivating fantasy and life-threatening danger, the sequel to A Wicked Thing takes Sleeping Beauty on an adventure unlike any she’s ever had before.

I actually liked this book, but I didn't like SOME things about it. I can't help but compare this book to its predecessor, A Wicked Thing. There were some things that were better addressed in this novel, but other things that were even poorer than in book one. Kingdom of Ashes is the second and final book in this duology - as is noted by the Publishers Weekly Rights Report.

Aurora is on the run, hunted by King John, hunted by her own people in Alyssinia. With the help of Nettle, a singer and spy for Vanhelm, Aurora flees to Vanhelm. There, the prince of Vanhelm helps Aurora learn about and practice her magic, which is wildly out of control. Aurora makes a deal with him - help her with her magic, and she'll rid Vanhelm of the dragons that threaten the kingdom. Aurora will learn more than just magic - she'll discover a century of truths and lies about her destiny.

Something that really worked for me in this book - Aurora is now less spineless and more, let's say, innovative, than she ever was. She goes to Vanhelm not because she has nowhere else to turn, but because she knows the Prince Finnegan can help her understand her magic. She's much more assertive and commanding in this book, much more decisive. There is a feminist quality to this book, and I was a fan of the growth of Aurora.

I also really liked seeing Finnegan grow. One of my complaints from A Wicked Thing was that Finnegan seemed very one-dimensional. That is not the case in this book. We get a lot of personal information about Finnegan, a lot of background knowledge that makes him seem a lot less one-dimensional. I liked seeing him unsure and sad, because usually all we saw from him was charm and flirtation and assurances. I love Finnegan's charm and whatnot! I think he is a wonderful male protagonist.

I liked that what I thought was a love triangle in the first book completely disappeared in this book. I had had a feeling that Tristan would be less of a factor in the romance, and that is very true. He appears in this book but Aurora doesn't even think of him anymore, as anything. The romance is very minimal, but completely between Aurora and Finnegan.

There is a strong presence of dragons! I can't remember if there was a single dragon in book one, but there were a looot of them in this book. The dragons are seen as a bad thing, a danger, a constant threat to Vanhelm (and the world in general). And they are! They destroyed Vanhelm. But at the same time, the dragons are animals, and magical. I love the choice that Aurora makes, in terms of the dragons.

The story was well-written, well-crafted, and I sped through this book! As far as retellings go, this isn't the worst one, but it's not amazing. I love the whole "after the kiss" aspect. But I had some issues with this book, and I couldn't give it higher than three stars.

I was so so so disappointed by the romance. I LOVED that the potential triangle aspect disappeared - Tristan never existed as a love interest after A Wicked Thing ended. I LOVED that Finnegan and Aurora had this slow-burn type of relationship in this book - sort of. But I didn't like how many times Aurora hesitated to open herself to Finnegan, even though it's so obvious to everyone and to herself, that she likes, cares about, even loves him. She's assertive and decisive in every way, except in acting on her feelings.

The thing with "feminist" books is that there are some people that say that a woman shouldn't need a man, a girl doesn't need a boy, a book doesn't need a romance. I despise that this is something that framed the romance in this book. Aurora doesn't let herself act on her feelings - saving Alyssinia is too important, despite the fact that she nearly killed Finnegan and half of Vanhelm in the process. I don't like that she doesn't find his feelings important. I don't like that in the end, she decides that opening herself to him isn't important. It's so stupid, you know? Feminism is all about empowering a woman's choice. You love a prince? Own it. Why the f**k should that be something "weak" or not feminist? I'm so sick of people saying that a woman doesn't need a man. WHILE THAT IS TRUE, it doesn't mean that a woman shouldn't WANT one (if that's who she's interested in). And in this case, Aurora is very much interested much interested in Finnegan and Finnegan alone.

And even if this isn't the case - the romance was still pretty crappy. Aurora needs to grow up in that aspect, and stopping jerking Finnegan around. And what pisses me off even more is that this book ends with her ambivalently dragging him along. She won't marry him BUT she wants him to stay. Who the h*Ll do you think you are? He's not some f**king courtside lover. He's a PRINCE, heir to the throne of Vanhelm. Ahhh, this makes me mad!

Other things I didn't like - the ending in general was very very open-ended. This book is it, since the series is a duology. The issue with Celestine is hastily swept aside. You think I'm going to be happy with a "she's not going to bother anyone anymore?" conclusion? She's still alive! Of course she's going to bother everyone! You just spent two books fighting Celestine and her curse and THAT is the ending you come up with?! Weak. Such a cop-out.

I think there were more things (like, this book seemed way too short and it read like one big scene - not a ton happened), but the issues I mentioned were enough to piss me off and drop the rating.

If you read A Wicked Thing and enjoyed it (at least somewhat - remember, I gave it three stars), then you should give this book a shot. I've seen most people like this one more than book one, so that's a plus. It could just be me! And remember, three stars isn't bad. I didn't hate this book. Overall, it was decent. Just not... great.

If you read A Wicked Thing and didn't like it/have no zeal to continue the series, then do not waste your time. It's not worth it. This book isn't SO much better that you should give it a shot.

3 stars. I wanted to lean more to the 2.5-star side, but I think 3 stars solid is the true rating. I'm glad I finished the series, even if I didn't enjoy it as much as I'd hoped.