Review: The Rule of Mirrors by Caragh O'Brien 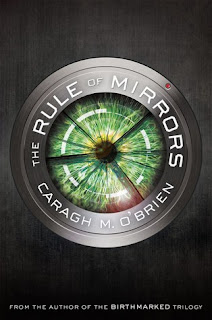 The fast-paced, psychologically thrilling sequel to The Vault of Dreamers follows Rosie after her consciousness has been split in two.

The entire country was watching when Rosie Sinclair was expelled from Forge, the prestigious arts school that doubles as a reality TV show. But few know how Dean Berg was mining students' dreams in laboratories deep below the school. And no one, least of all the Dean himself, knows that when Rosie's dreams were seeded into the mind of another patient, Rosie's consciousness woke up in that body--a girl far from Forge, a girl with a completely different life from Rosie, a girl who is pregnant.

Told from alternating points of view between Rosie as she makes sense of her new identity and the shattered subconscious that still exists in her old body, this sequel to The Vault of Dreamers will keep readers on the edge of their seats and leave them hungry for more.

I read The Vault of Dreamers in August 2014 and I was pretty disappointed by the ending (as well as there were others things that I didn't enjoy). The ending was SO confusing! And at the time, none of us knew that there would be a sequel to the book (or two!), so I was pretty furious with how I thought the book ended. But I'm really pleased to say that this sequel did an amazing job of clearing up what happened at the end of The Vault of Dreamers, and it took the story to a whole new level.

At the end of The Vault of Dreamers, Rosie's consciousness was split. There is Rosie in her body, trapped in the vault of dreamers, mined and seeded by Dean Berg. And then there is Rosie who was seeded into the mind of a brain-dead, lifeless girl who was in a coma for six months, Althea Flores. Althea's parents are so pleased when "Althea" wakes up, but Althea is no longer there; it's all Rosie, the seed of Rosie that IS Rosie. Althea Rosie knows that Rosie Rosie is out there, stuck in the vault. But Rosie Rosie has no idea that Althea Rosie exists. As Rosie Rosie escapes the vault, Althea Rosie must wade through a new life, the life of a pregnant eighteen-year-old.

So now we know! There are "two" Rosie's now. Both are actually Rosie. They are no longer two voices in one head, as we saw at the end of The Vault of Dreamers. I liked Thea's Rosie much more than I liked Rosie in her body (who I'm going to refer to from now on as just "Rosie").

Thea/Rosie is very confused when she wakes up in a hospital, and pregnant. But she quickly realizes that Dr. Fallon has placed a seed of Rosie's into Althea Flores's mind. Thea's parents are convinced that the surgery was successful, but Thea/Rosie tells them the truth - Althea is gone, no longer present in the mind. Still, Thea/Rosie knows that her best chance of finding out where Rosie is and getting Linus's help would be to go home with the Flores family, not pretending that she's Althea, but at least trying to accept her fate.

Except obviously it's not easy when at one breath you're sixteen and crushing on hottie Linus, and in the next breath, you're 18 and pregnant. Even though Thea/Rosie is not the "primary" Rosie, I really liked her more, of the two. Thea/Rosie is so resilient and very resourceful and intelligent. She also doesn't freak out nearly as much as one might when they see that they are pregnant. Everyone knew that Althea was pregnant, before and at the time of her accident. But obviously Thea/Rosie was in for a shock. Anyway, I was impressed with Thea/Rosie.

Rosie herself is not in good shape. She escapes the vault with some help, abandons that help, and finds Burnham Fister. To be honest, I don't remember much about Burnham - although apparently I was wondering what happened to him, at the end of The Vault of Dreamers. I admit, I really liked him, in this book. He's a good guy! We don't see a ton from him in general, but he plays a key role in the climax of the book.

And then Rosie finds Linus too. Linus is the love interest from book one, and the connection is totally still there. I like Linus. The romance between Linus and Rosie is fairly minimal in terms of the amount of pages that it gets, but it's there.

I wasn't the biggest fan of Rosie (the "primary" one), but she has had a rough time, so I should probably cut her some slack. Honestly, towards the end, she got kind of really b***y, especially when she and Thea/Rosie finally meet. But while they are different, they are utterly the same. I definitely liked Thea/Rosie better though. There is a bit of romance for Thea/Rosie, but keep in mind, she is also VERY MUCH Rosie, so it really sucks for her that Rosie (in general) has feelings for Linus (and vice versa), because Thea/Rosie still likes him (despite him not having much of a connection her). Thea/Rosie's love interest is a sweetheart (and not Linus, so I don't see a love triangle manifesting). Basically, two linear romances happening.

This book is no less creepy and thrilling than its predecessor! I got chills during so many scenes. The "sciencey" part of this book is both fascinating and totally creepy; dreams are mined and seeded, allowing the consciousness of a person to enter into another body -a form of immortality, perhaps? We learn why Dean Berg is up to everything, and (kind of) why Rosie is so important. I'm super exited to see where the next book will take us!

The ending of this book was SO intense. Several key things happened one after the other. We're not sure of what is happening to one character, and we don't know where another character is going. It's somewhat of a cliffhanger ending, but NOT a painful one. A hook cliffhanger without it being cruel - which I can handle!

I really just did NOT like Rosie (the "primary" one) as much as I wanted. I don't remember how I felt about her in The Vault of Dreamers, but I think I liked her. In this book, her split consciousness is nicer and more likable than she herself is. I much preferred reading from Thea/Rosie's POV, than Rosie's POV. Maybe Rosie was too weak (physically and mentally) and I couldn't relate to her? I'm not sure. At the very last scene, she kind of redeemed herself in my eyes. But like, the very last half of the chapter. So I think I'll be okay in book three!

If you read The Vault of Dreamers, I do recommend reading this book. It's less confusing than book one, and A LOT of things that I didn't like and/or were confused about in book one were explained in this book (like a tooooon of things). There are still things we don't know, but it makes sense because there will be one more book in the series. If you haven't read The Vault of Dreamers, skip the series or wait to binge-read all three!

4 stars. A much better novel than its predecessor! I'm glad I decided to keep going with this series, because this book totally hooked me! I can't wait to see how the series ends.