Review: Kissing Ted Callahan (And Other Guys) by Amy Spalding 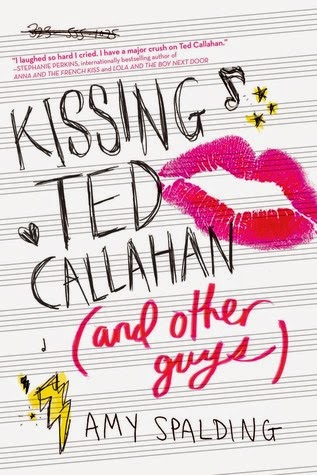 Nick and Norah's Infinite Playlist meets Easy A in this hilariously realistic story of sneaking out, making out, and playing in a band.

After catching their bandmates in a compromising position, sixteen-year-old Los Angelenos Riley and Reid become painfully aware of the romance missing from their own lives. And so a pact is formed: they'll both try to make something happen with their respective crushes and document the experiences in a shared notebook.

While Reid struggles with the moral dilemma of adopting a dog to win over someone's heart, Riley tries to make progress with Ted Callahan, who she's been obsessed with forever-His floppy hair! His undeniable intelligence! But suddenly cute guys are popping up everywhere. How did she never notice them before?! With their love lives going from 0 to 60 in the blink of an eye, Riley and Reid realize the results of their pact may be more than they bargained for.

I think this book was much too trivial for me. It's unfortunate, how I now think that sixteen years old is too young for this mess. I'm almost twenty, but this girl seems to be so much more promiscuous than me. I know we're supposed to be all "you go girl" and "do your thing" and "Miss Independent" about a girl's romantic/personal choices, but I HATE that culture. I hate today's dating culture. But let me touch on that later.

Reid and Riley made a pact to document their reinvented personal lives in a book (The Passenger Manifest). Riley starts to notice guys, like Garrick, her lab partner, and Milo, a guy she meets at a record store... and Ted Callahan, a guy she's always had a crush on. Suddenly, she's hanging out with all three of them. She's kissing all of them. Her romantic life is a "wonderful" mess (wonderful to her). Meanwhile, Reid is falling in love with one girl, only to find out that she has a boyfriend, and then with another girl, but freaks out because he really likes her and thinks she likes him too. Basically, Riley's getting a ton of action, and Reid's getting none (he's neurotic), and things spiral out of control.

I liked the beginning of this book, when it seemed like Riley was attracting the attention of several guys, and she was reveling in the feeling of being wanted. When she started hanging out with all three of them, and kissing all of them, I was kind of done at that point.

We're about to get really personal, guys. Tuck in.

I HATE THIS HOOK-UP CULTURE. I hate seeing it portrayed in books, because in books, it's usually portrayed as something that is okay or acceptable. This book is no different. It is totally okay for Riley to kiss three different guys at the same time. It is totally okay because she wasn't exclusive with anyone, and therefore, she can act however she wants. No commitment, no loyalty. The three guys don't know about each other, until the end of the book (I don't know if that would have made a huge deal while it was happening).

This hook-up culture is NOT okay. It happens in high school (as we can see in this book), and it DEFINITELY happens in college (I see it all the time). I hate it. I think it's trashy and low-down (sorry if you participate in this culture). I think a girl (OR GUY) should respect others AND her/himself enough to be with one person at a time. Break things off with the other person and then move on. Don't string people along. It's nasty and rude and inconsiderate. Forget independence. Forget exclusivity. You should be clear and upfront with what you want. It makes things so much less confusing.

Literally half of the problems in this book wouldn't have happened if people COMMUNICATED. But then, Riley thought it was okay to be with three people at once, so I don't know. There were a lot of problems with this book. It so bothers me that she saw NOTHING wrong with her actions. It bothers me that people today see nothing wrong with this hook-up culture.

Like I said above - I get it, we're supposed to respect a girl's decisions when it comes to hooking up and having sex and kissing people because YAY FEMINISM. Right? If guys can do it girls can do it, kind of thing? I HATE THIS. I hate promiscuity. Call it whatever you want, make whatever excuses you want - I don't think it's okay at all to be seeing (and being intimate) with more than one person at a time, exclusive or not, taken or not. It's just not okay with me. Forgive me if my morals are at higher standards than yours. And before anyone jumps down my throat - no, I'm not saying I'm better than anyone, or perfect. But I have the decency to practice monogamy at all times.

I hated Riley, and not just because of her promiscuous actions. She has no control over what she says. I have no idea if anyone in real life is THAT BAD. Literally, she says EVERY SINGLE THING that she thinks. I don't think that's physically possible.

I also hate how the author uses all caps when she's trying to show that Riley is yelling or being extremely serious. It seems so unnecessary and out of place.

Gosh, this book seems so inconsequential. Everything that happens is so juvenile. I should have known, when I saw the title, that this book would be about a girl experimenting and hanging out (kissing, messing around) with different guys (plural), hopefully settling on one. This is like The Bachelorette, except that the guys have no idea that the others exist (until the end), and it isn't all staged (come on, those shows are totally staged).

I'm glad Riley chose who she did, but I feel bad for him. Riley isn't a girl I'd want to date.

Another thing - I generally don't really like books about music. With music as the focus, and the protagonists are playing in a band. I'm just not a fan of this, and this book was no different. I play the piano, I love music... but not band/rock/pop/etc. type. These books don't appeal to me.

Anyway. Gosh, I didn't like this book. What a waste of my time. I can't imagine what Riley would do in college - probably sleep with whole fraternities at a time, "finding herself" and "experiencing romance". ROMANCE. Really, you mean lust and one-night stands.

Nope. Pass it straight and move on. This isn't a fluffy, heartwarming contemporary novel that will make you fall in love with the hero and heroine. It's a silly, awkward, trivial contemporary that almost seems Middle-Grade-ish, if not for the, um, interesting content that occurs. The heroine is brainless, the romance is so ridiculous, the story itself is silly. And not in a good way.

1 star. I'm not sorry I read this one, but I'm sorry that I thought I would like it. If that makes sense? I would never read it again, or recommend it, or buy it or borrow it. I can't support books like this with such immature and irresponsible themes. Would I want my (future) children reading this? Absolutely not. Would I want my mother reading this? DEFINITELY not. She would hate to see such a book influencing her daughter. Horrible book, horrible themes.