Review: The Ring and the Crown by Melissa de la Cruz 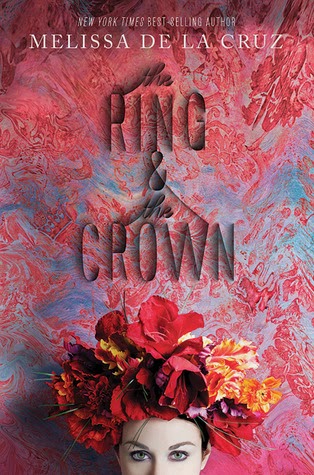 Princess Marie-Victoria, heir to the Lily Throne, and Aelwyn Myrddn, bastard daughter of the Mage of England, grew up together. But who will rule, and who will serve?

Quiet and gentle, Marie has never lived up to the ambitions of her mother, Queen Eleanor the Second, Supreme Ruler of the Franco-British Empire. With the help of her Head Merlin, Emrys, Eleanor has maintained her stranglehold on the world's only source of magic. She rules the most powerful empire the world has ever seen.

But even with the aid of Emrys' magic, Eleanor's extended lifespan is nearing its end. The princess must marry and produce an heir or the Empire will be vulnerable to its greatest enemy, Prussia. The two kingdoms must unite to end the war, and the only solution is a match between Marie and Prince Leopold VII, heir to the Prussian throne. But Marie has always loved Gill, her childhood friend and soldier of the Queen's Guard.

Together, Marie and Aelwyn, a powerful magician in her own right, come up with a plan. Aelwyn will take on Marie's face, allowing the princess to escape with Gill and live the quiet life she's always wanted. And Aelwyn will get what she's always dreamed of--the chance to rule. But the court intrigue and hunger for power in Lenoran England run deeper than anyone could imagine. In the end, there is only rule that matters in Eleanor's court: trust no one.

Oh how I LOVED this book! I had a very good feeling that I would, because it's historical fiction AND fantasy, it's by Melissa de la Cruz, it's a Disney book (I seem to really enjoy Disney's books), and it has a very intriguing synopsis! Not to mention a beautiful cover. I enjoyed de la Cruz's Blue Bloods series (what I've read, anyway), and my favorite genre ever is historical fantasy (which describes this book perfectly). The cover is the icing on the cake. And guess what? I really enjoyed this book!

The book is actually a lot more complex than it sounds. The princess, Marie, doesn't want to rule. She is the only heir to the throne, and her mother is getting ready to give the throne to Marie and Marie's future husband (e.g., Marie needs to find one). The most eligible suitor is Leopold, Crown Prince of Prussia. But Leopold is currently having relations with and is engaged to Isabelle, a French noblewoman (she might be a princess or duchess or something, I can't remember). Also infatuated with Leopold is Aelwyn, the powerful sorceress and daughter of Emrys, the current Merlin of the current Queen.

Throw in the fact that Marie is in love with a soldier, and the fact that Leopold's troublesome younger brother falls in love with a broke (but trying not to act broke) American heiress. Or the fact that Leopold isn't who is seems, and Wolf (his younger brother) is more than he thinks he is. Isabelle must sign away her marriage with Leopold, but he has her caught in an affair - literally - but she doesn't want to be a mistress. All the while, someone is plotting against the Lily Throne, and difficult choices must be made. Aelwyn and Marie must save the kingdom - together - and in the process, discover terrible and powerful truths.

Complicated, no? Trust me - you have no idea. The lines get so blurred in this book. Every watched Gossip Girl, or 90210? Those shows were this girl thinks she is in love with this guy, but then a few months later, she's totally smitten with some other guy. Relationships aren't concrete in this book, but truthfully, that's how things were, historically. When it came to nobility and royalty, marrying into money and power was more important than love. Keeping up appearances was everything. If the one you loved was royalty, he/she would have to marry royalty, and the best you could hope for (if you weren't eligible) was being a mistress (or lover, whatever the male version of mistress is).

That's probably one of my favorite things about this book. I know, it's weird that I LIKE the fact that the romance is weird and triangular and square and rectangular and circular and all kinds of shapes. I kind of want to draw a map of what is going on with the romance! Or lust. Or relationships. It's confusing, it's complicated, but that's life in the court. Nothing is easy. Everything is heartbreaking. Just wait until you get to the end of the book. Nothing turns out as one would like it.

So I won't comment on the romance any more than I have. Like, I won't name any pairs that I liked or disliked, for fear of revealing things. I didn't mention a few of the love interests or pairs. However, I will talk about the characters.

There are SO MANY characters, and I can't even say that most are secondary characters. In terms of perspectives, there were Marie, the princess, Aelwyn, the sorceress/close friend of the princess, Isabelle, the French noblewoman and former fiancee of Leopold, Wolf, the second prince of Prussia, Ronan, the rich-but-not-rich American... I think that is it for the ones whose perspectives were featured. This book is written completely in third person, but third person limited.

I think I liked almost all of the characters. Marie is gentle and kind, but she has a certain fire in her, a bit of steel in her backbone. Aelwyn is serene and intelligent, and probably one of the most stable characters in the book. Isabelle - I felt so bad for her, and I don't blame her for disliking Marie. Isabelle ALWAYS got the short end of the stick, unfortunately (remember that phrase, for the next section). I could not hate Isabelle. Ronan is a delight to read, because she is so different from the English and the French. Wolf is definitely my favorite character. He is mischievous and devilish, but he is also mature when he needs to be. I love his roguish charm. He deserves the best, of all the characters.

Leopold does not have his own perspective in this book - thank goodness. To be honest, I'm not a fan of him. I usually dislike the pretty boy, the golden boy, the boy who is seemingly perfect, but is actually ruthless and a total player. It's one thing to have all the ladies running after you. It's another to act like a pig and flirt with all of them, and lead them on. Jerk. But he definitely is a Crown Prince, and a natural leader.

I already mentioned the complicated romance, but with that is the complex plot. The romance seems to take up most of the book, and it's important. One pair's relationship directly affects others. Marie's feelings for the soldier. Leopold and Isabelle's affair. Aelwyn's infatuation with Leopold. Believe it or not, everyone affected everyone. This made the plot vastly tangled. Add in the underlying plot of the threat to the kingdom, which TOTALLY sneaks up on you. You would never guess who is behind it all. There are many villains in this story, directly and indirectly. But there are also many heroes (and heroines). But seriously - the depth of complexity really blew me away. When I finished this book, I was like, this book was awesome! Crazy, but awesome. Because it really was awesome, and crazy! It's amazing how intricate everything is, how de la Cruz sets everything perfectly, and intertwines everything to fit absolutely. Truly amazing, in my humble opinion.

Perhaps I've said enough? I hope I've done a good job of convincing you all to read this book. The next section is my "negative" one, but I feel like in this case, it consists of complaints about which only I would complain. All in all, this is an excellent start to a new series, and definitely my favorite of de la Cruz's published books to date!

There weren't too many things that I didn't like, but one thing that occasionally stuck out was the anachronisms. By now, you all have probably figured out that when it comes to historical fiction, I'm extra hard on authors. If the genre (or one of them) is historical, then you better get your facts straight (unless of course, you're manipulating history, or something like that). In this case, it was the speech that was a bit anachronistic.

I get it - you want your readers to be able to read and understand the story, and not feel like they're drowning in Old English. I understand that. BUT, at the same time, you can't just have modern day colloquial slang left and right. For example, the phrase "Why don't we seal the deal... - I feel like that's too modern for this time period (which is the late 19th century, early 20th century? Somewhere around there). And there was one about "the short stick of the bargain", or something like that. There are historical phrases that are KIND OF similar to the phrase (like "worst end of the staff", or "wrong end of the stick"), but that particular phrase is modern. There was a really obvious that I didn't bookmark (for whatever reason), and I can't quite come up with it at the moment, but it was obvious. In any case, I feel like there are other ways to convey a phrase, with less modern day colloquialisms. Instead of "sealing the deal", how about "coming to an agreement", or "finalizing the accord", or something like that. Right? Right.

DEFINITELY! If you're a fan of historical fiction, or fantasy, or both (like me), then there is a good chance that you will like (or love) this one! Also, as stated before, the book has a very modern feel, in terms of all the scheming and threats and messy relationships. Of course, historically speaking, that happened all the time, but it felt very Gossip-Girl-like or 90210-like, in terms of the drama. Which, in my opinion, was a positive thing, not a negative thing. But take that as you will. I think this book is fantastic, and I definitely recommend it. I'm sure it will be a hit!

4 stars. I seriously loved this book! Okay, it didn't get five stars from me. But I was not disappointed at all! I cannot wait to see what happens next in the series.