Blog Tour Review: The Secret Side of Empty by Maria E. Andreu 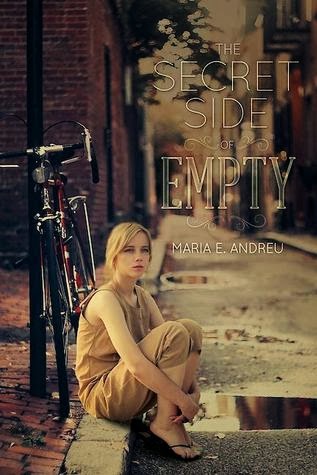 As a straight-A student with a budding romance and loyal best friend, M.T.’s life seems as apple-pie American as her blondish hair and pale skin. But M.T. hides two facts to the contrary: her full name of Monserrat Thalia and her status as an undocumented immigrant.

But it’s harder to hide now that M.T.’s a senior. Her school’s National Honor Society wants her to plan their trip abroad, her best friend won’t stop bugging her to get her driver’s license, and all everyone talks about is where they want to go to college. M.T. is pretty sure she can’t go to college, and with high school ending and her family life unraveling, she’s staring down a future that just seems empty. In the end, M.T. will need to trust herself and others to stake a claim in the life that she wants.

Author Maria E. Andreu draws from her personal experience as a (formerly) undocumented immigrant to explore an issue that affects over one million children in the U.S. But while the subject matter is timely, it is M.T.’s sharp, darkly funny voice and longing for a future that makes this story universally poignant.

Wow. I just finished this book and... wow. What an incredible story. This novel hits so many hot issues in today's society, including immigration, child abuse, and suicide. This novel was kind of personal, for me, because both of my parents came her as immigrants, and while they lived with green cards, they weren't legal citizens until about ten years ago. I was born in the U.S., so of course I couldn't fully relate to M.T.'s story, but it was truly touching.

M.T. and her family are illegally living in the United States - I suppose with the exception of her little brother, Jose, who was born in the United States. M.T.'s father wants to move the family to Argentina, but saving money is difficult when you can't get a good job that pays well. M.T.'s academic life is stellar - until it isn't. Her social life takes a leap with a boyfriend, but then crashes. Everything is coming apart, and M.T. has to decide what is important and what she needs to do.

This is quite the roller-coaster year for M.T. It begins at the end of her junior year and the end of her secondary education (not telling how that ends...). She dodges the college questions, the what-do-you-what-to-do-with-your-life questions, the driving tests, EVERYTHING, left and right, to avoid bringing about anything that has to do with being a citizen of the U.S. (which is a lot - basically everything). Her relationship with Chelsea (her best friend) slowly becomes strained, as Chelsea feels like M.T. is pushing her away.

M.T.'s family life is pretty bad. Her father is constantly angry and hits her, her mother is passive, and her little brother is sheltered from all the anger and hate. I really felt for M.T. in the situations involving her father - I would have called the police from the first incident. Physical/emotional vs. possible deportation? I'll take the *possible* deportation. Things get worse and worse, on the family end, especially with her father's shaky job and her mother's insistence on M.T. going to a private school

M.T. gets a boyfriend pretty quickly into the story, and I actually really like the guy. M.T. has some serious trust issues, which is totally sad because she doesn't trust the guy, but she is the one that acts shady, in my opinion. Which is totally justified, but still, don't be a hypocrite about it. I liked how the romance worked in this book, because it's very realistic. M.T.'s reaction to having a first boyfriend and clinging to him so much is warranted, so I feel like the direction the romance took is a really smart and natural one.

The story is so well-constructed, in my opinion. It takes us through M.T.'s reactions to the growing pressures of being illegal, of continuing to keep up pretenses, of going to school and keeping up grades and so on. I wanted to know what M.T. would do, day after day, and when it reached a certain point, I expected the instinctual reaction - suicide. It was heartbreaking to know that M.T. had come to that conclusion one time (or more).

One thing that I liked about the structure of the story in particular was that it switches at times, between present and past. The "past" is introduced more as memories, so it's not obviously stated that we're going into M.T.'s past. I love this, because it's subtle, but very informative.

Random note: don't you love the play on words? M.T. - "Empty"? I thought that was clearly. I noticed it before reading it in the book. I like quirky things like that.

Overall, I'm really happy that I gave this book a chance, but I really liked it. M.T.'s personal journey really resonated with me. I can't ever imagine being her situation, living with that fear. This is such a beautifully crafted debut!

I actually don't have anything specific to say in this section. Why 4 stars and not 5 stars, then? It's another one of those novels that FEELS like a 4-star-read to me, instead of 5 stars. I can't exactly explain my rationale. But that doesn't mean that I had a problem with the book or that I didn't love it or that I wouldn't recommend it. This was an excellent book!

I think I would classify this book as a "tough-issues" book, because of the subject matter (immigration). M.T.'s story is incredible, but I know that these types are not for everyone. In fact, even I was hesitant to accept a review copy, because I don't usually read these types of books. Which is actually funny because I've read three in the last week, I believe. WELL. I generally stay away from "tough-issue" books because they make me sad. This was a wonderful type of sad, and I'm really glad I read this book.

4 stars. This was a touching, moving novel! I really enjoyed it, and I would highly recommend it especially to those interested in the topic of immigration. This is a fantastic debut! 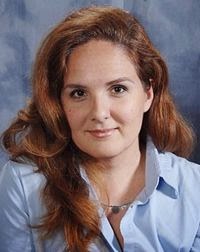 Maria E. Andreu is the author of The Secret Side of Empty, a young adult novel due out Spring, 2014 (Running Press). It is the story of M.T., a regular American high school senior who is just like everybody else with one important exception: she is undocumented. She was brought over as a baby and her parents overstayed their visitors' visa. Now, with graduation looming, and no social security number for a college education, a job, a driver's license and everything else her friends are planning on, she's got to make some tough choices that will impact the lives of everyone she loves.