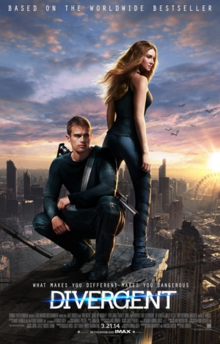 Two things before I start this review: one, this is my first movie review. I'm doing it because it's the first YA book-to-movie adaptation I've seen WHILE blogging. I feel obligated to review the movie, since I read the book (a long, long time ago). Which brings me to my second thing: I read Divergent when it first came out in 2011. I didn't start reviewing until the second half of 2012, and didn't start blogging until December 2012. So I never reviewed Divergent (the book), or even Insurgent. It feels weird that I'm reviewing the movie when I haven't even reviewed the first two books, but I promise you I've read them and loved them. I haven't read Allegiant though, but when I will, I plan on reviewing it.

So. What did I think of the movie?  For starters, I think it is an EXCELLENT movie. Separate it from the book for a second - say it was just a movie, NOT based on a book. It is a terrific movie! Well made, produced, directed, cast-ed, etc. I think the acting was great and the setting was very well created. As a movie, just a movie, it is definitely a good one.

The casting: I think the cast is really good. When they were casting last year, I remember being super excited about Shailene Woodley playing Tris, because she seemed like a good fit for her, in terms of both looks and personality. I stand by that original judgment - Shailene did a great job of representing Tris. One thing that we need to remember is that we READ Divergent in Tris's first person point-of-view, but we can't WATCH Divergent in her first person point-of-view. All things considered, I really liked Shailene as Tris.

Theo James. I can't say enough about Theo James. I wasn't excited about him being Four when they selected him, but I wasn't angry either. I didn't like that they aged Four's character by six years, and I thought Theo was a little old for Four. But Theo James did an AMAZING job as Four. He pulled off Four's quiet, badass, scary demeanor, as well as his calm and thoughtful side. I was shocked by how well Theo seemed to be Four. Heck, Theo BECAME Four. I'd argue and say that Theo was a better Four than Shailene was Tris. They both rocked it in this movie.

The secondary characters were well-selected as well. Maggie Q as Tori was really cool. Honestly, I don't remember the character of Tori super well, but Maggie Q made things interesting. I LOVED Christina's actress (Zoe Kravitz). I've never seen her act before, but she pulled off Christina very nicely. Kate Winslet was a very creepy awesome Jeanine - thumbs up there. And guess what - I think our very own Veronica Roth was in the movie! Check out the zip line scene REALLY CLOSELY - you'll see her (but make sure you remember what she looks like first).

Some of the scenes in this movie were SO WELL DONE, and blew me away. The Choosing Ceremony, the Dauntless train rides, the jumping. The scene at dinner with Four being "so approachable". The knife-throwing scene. Tris and Four climbing the Ferris Wheel. Love love love.

Speaking of love, I can't go through this entire review and NOT mention the romance. One thing I loved about Divergent (the book) was that Four is so much more than a love interest. In fact, I'd say that he is a male protagonist first, and a love interest second. His role in the book is much more than Tris's crush (and then boyfriend). The romance in the first book is really subtle, simple, and sweet. The movie does a great job of conveying the romance. We get hints of budding affections throughout the movie, but I LOVE that the movie doesn't just throw it in our faces. Usually, with movies, the romance must be really commercialized and obvious and it's disgusting. But this movie sticks with the progression of the romance in the book. This way, we get to know Four as a person, and Tris as a person, and THEN the two of them as a couple.

For the most part, this movie sticks to the book's plot. I totally understand that a book's manuscript and a screenplay are veryyy different. However, all and any changes that the screenplay had and the movie featured didn't bother too much. Yes, this film wasn't exactly like the book (see below for key things that were changed). However, I liked the changes (for the most part), and I think the screenplay writers did a really good job of condensing the (very long) book into a screenplay without cutting the really important scenes, and even scenes that seem like a small deal but actually matter a lot.

Well, as with all book-to-movie adaptations, there were things that were changed. And the changes are justified... mostly. There were a few that stuck out to me, that I wasn't totally happy with. For example, do you remember in the book how there was a Visiting Day, and Tris got to see Natalie (her mother)? I thought that scene was really important, because it showed Natalie's connection to Dauntless, it showed Tris's father's refusal to see his daughter, and it gave us a peak of Four's affection for Tris. The movie DOES have a short scene with Natalie and Tris (in which Natalie's connection to Dauntless is hinted), but that scene is manufactured, and NOT in the book.We don't get to see how Tris's father's absence at the Visiting Day affects her - there is no Visiting Day in the movie.

The thing that bothered me the most was the "capture the flag" scene, with the Ferris Wheel. Do you all remember how Tris LET Christina get the flag, instead of pushing Christina out of the way and capturing it herself? Well, in the movie, Christina stays behind to guard Tris's back (she offers this assistance, and says something almost exactly like that in the movie). TRIS is the one that captures the flag. This is a HUGE change, in my opinion. No longer are we seeing that Tris is selfless in victory, that she let someone else take the credit for something she thought of herself. They wouldn't have won if Tris hadn't climbed the Ferris Wheel, and come up with a plan.

Instead, we have all attention on Tris. I understand why the writers would change this scene like that. They want to show that Tris is a competitor, a strong Dauntless Initiate, and every much a threat as she is supposed to be (as a Divergent). But we lose the selflessness of that scene.

The ending was also not completely correct (according to the book). I honestly don't remember Jeanine being in the ending like how she is. Again, I guess I understand why writers made the ending so different - they want the audience to have a clear villain to blame (because reading books and watching movies is very different with different audiences, so we wouldn't want our different audience to be confused!), but it made the ending a little strange, in my opinion. I won't say anything specific about the ending, so you'll have to see what I mean.

Even though the last time I read it was in 2011, I re-read Divergent ten thousand times, and I think I know this book pretty well. Like I said in the previous sections, the changes were justified (for the most part), but they were still changes. I can't love them all!

4 stars. I'm so glad I watched this movie! It was totally worth my time over spring break, and I really want to see it again (alas, I go back to school on Monday!). Even if you're a book purist like me, who rarely enjoys book-to-movie adaptations, you will most likely enjoy this one!

Check out this article that describes the major differences between the book and the movie!

Check out this article about rape culture and Divergent!
Posted by Alyssa at 12:00 AM