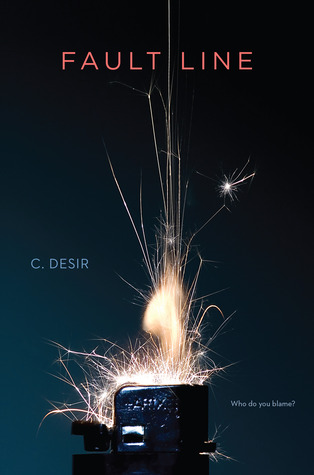 Despite my slightly low rating of this book, I enjoyed this book! I was scared that I wouldn't, because everyone who follows me regularly knows how I generally feel about "tough-issues" contemporary novels. For the most part, I either LOVE them or HATE them - and it's usually the latter. I actually just read Far From You by Tess Sharpe, and it got three stars from me, but on the negative side. This rating, of Fault Line, is on the positive side of three stars. I liked this one.

Ani and Ben have a whirlwind relationship - upon seeing each other, they fall in lust. Ben loves her blunt, straightforward attitude towards everything. Ani is unique, different, special. Ben is sweet and thoughtful, athletic and totally male. Together, the pair is all kinds of fabulous. But things change when one night, Ben doesn't go to a party with Ani. And something happens to Ani - something awful, something that should never happen to anyone. Half of this book is about what happens before, then what happens, and then the other half is about what happens after.

This book is told from Ben's first-person perspective, and I liked that! It was interesting to see a story of a person's rape from not an outside, someone who cares greatly about the victim. A very direct relationship, but not the victim herself. Ben is a great protagonist, and I liked following his perspective. I respect him for all of his decisions - trying to stay Ani, keep her secrets, shield her, love her. I don't agree with all of them, especially when it comes to the swim scholarship, but I respect them.

Ani... I did and did not like her. I feel so bad for her - no girl should never have to go through what she went through. The author portrayed the situation and Ani's personality changes SO WELL - I was impressed. I hate what Ani became, but I love how well the author wrote her victim.

That's something that really stuck out to me - how well Desir created this story. How well she constructed reactions, emotions, capabilities. She had everything perfectly placed - Ani's breakdown, Ben's desperation, the back and forth between them... I really love how Desir knew her stuff, about the victim, the people close to the victim, the reaction of the students, and so on. Wow.

Overall, this novel is really powerful. I try not to read too many "tough-issue" books because I usually dislike them, but also, because they are so sad. But the powerful sad, the kind that makes you think and appreciate what you have. I don't know how I would react, if I were ever placed in the situation Ani was (hopefully, that never happens). Yes, I want to blame Ani in part, but also the people who did the terrible act. This book definitely makes you think!

While I definitely enjoyed this book, there some things that I would have liked to seen. For example, understanding Ani's side of things would have helped my perspective of her. Knowing exactly what happened to her that night, by the end of the book, would have helped.

I liked the fact that this book was written in Ben's perspective, because it shows the aftereffects of the tragic event from the perspective of someone very close to the victim, but not actually the victim. However, perhaps alternating points-of-view would have worked better in this book. We could see Ani's side of things as well as Ben's. I feel like readers see Ani in a highly negative light, even if she is the victim. I almost hated her for what she was doing after the rape, but that's not right - she was raped. So, it would have helped to understand Ani's thought process, so that I would not have disliked her as much. That felt wrong.

Also, we never get to know EXACTLY, DEFINITIVELY, what happened that night. There are rumors, ideas, gossip, but nothing is concretely known. Part of this is because Ani doesn't remember anything. However, the truth could have come from the other boys? I feel like somehow, the author should have conveyed the events of that night to readers. In real life, this doesn't happen often - knowing exactly what happened - but in fiction, it would have been nice, maybe?

But my biggest thing was about Ani - I felt bad disliking her, but I really did not like her, by the end of the book. I totally understand that her reactions were from the event, but if I could have seen things EXACTLY from her point-of-view, then maybe I would have felt differently towards her. But as an outsider? I was saddened, disheartened, and disgusted BY WHAT SHE WAS DOING, not by what happened to her.

If you enjoy "tough-issue" contemporary novels, then I would definitely recommend this novel. Actually, I liked this one, so I would recommend it to anyone. Obviously, there were things that nagged me, but my overall feeling for this book was positive. The message of this book is very powerful, and I wish everyone would read this book or a book similar to it, to experience the before and after of such a tragic and life-changing event.

3 stars. I definitely enjoyed this book, but I wanted a little more. It's an excellent debut and a great "tough-issues" novel!