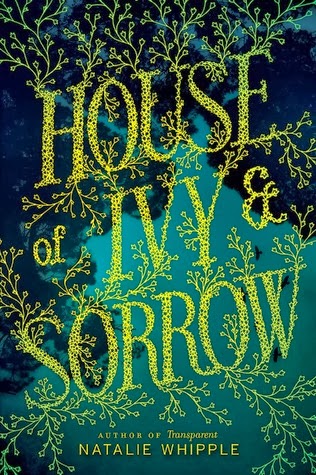 Josephine Hemlock has spent the last 10 years hiding from the Curse that killed her mother. But when a mysterious man arrives at her ivy-covered, magic-fortified home, it’s clear her mother’s killer has finally come to destroy the rest of the Hemlock bloodline. Before Jo can even think about fighting back, she must figure out who she’s fighting in the first place. The more truth Jo uncovers, the deeper she falls into witchcraft darker than she ever imagined. Trapped and running out of time, she begins to wonder if the very Curse that killed her mother is the only way to save everyone she loves.

Well, I definitely did not expect to like this book as much as I did! I'm not a fan of witch-related books, to be honest, so I surprised myself by downloading this one in September. I can't say I regret it! I enjoyed this book, much to my surprise and pleasure.

This book involves what people typically think of witches - with the cauldrons, spells, creepy house, etc. Jo lives with her grandmother, so that doesn't hurt the illusion either. But things start to get weird when a man shows up at the house (mansion? castle?), looking for Carmina - Jo's dead mother. But Jo's mother didn't just die - she was killed by the Curse, which sucked away her witch powers and killed her. But even weirder things are uncovered, and Jo must race against time to figure out what exactly is going on.

One of the things that really impressed me was how "witchy" this story really was. There were spells and cauldrons and magical barriers and secrets and spiders and frog and eyes and all those typical things you think of when you think "witch"! I really liked that, because it's like going back to the "original" stuff, instead of dressing up the idea of a witch in the modern world. This is set in the modern-day, in case you weren't sure. One of the things that was horrible but fascinating was the way in which the witches bind someone to silence - if they allow a human to know about their existence and don't wipe their memories. I won't give it away, but it's gruesome.

Those quirky (and sometimes horrible) things that made this witch story a real witch story was probably what kept me interested the entire time. The story was also very intriguing. Jo is trying to figure out what really happened to her mother ten years ago, with the Curse and the shadows. She and some other witch relatives comb through histories of the Hemlock family for a clue about the Curse. But there is a twist and turn at every page. A boy shows up - Levi - and he wants them to trust him, but everything about him is wrong.

This book has a good amount of focus on friendship. One of Jo's friends, Kat, finds out about Jo and her grandmother being witches, and is allowed to keep her memories (but she has to go through the binding process). This makes Jo and Kat closer (naturally), but that makes their friend Gwen jealous. Yup, not only does Jo have to worry about staving off the Curse, shadows, and Levi, but she has to keep a social life going, keep up with her new boyfriend, and figure out what to do to help her family.

Oh yes, there is a new boyfriend in the picture. Winn and Jo have liked each other for quite some time, but Winn grows a pair in the beginning of this book and asks her out. So, this romance is a little different, because the feelings already exist. The relationship itself grows, and it's really cute. And a tiny bit heartbreaking. And the climax and end is sad, but has its merits. I like the romance in this book (even if it is a bit predictable).

Overall, I really enjoyed this book! The story was very good and the action was pretty nonstop. I'm happy with the character development, the romance, and the ending. It's a standalone novel, and Whipple definitely ended it that way. I'm really glad I gave this book a chance, despite usually disliking witch-related books!

There were definitely some parts of this book that were excessively predictable. Or, at least, for me, they seemed really predictable. I won't spoil anything, but I'll give you a few examples. The mystery man in the very beginning of the story? OF COURSE he is who we think he is. And Winn? OF COURSE he can't just be exactly who we want him to be. And Levi? OF COURSE he always has horribly crappy timing, and OF COURSE Winn always walks in on Levi and Jo. OF COURSE these things must happen that way, right? So utterly predictable.

But, despite the predictability of some things in this book, I like this book a lot.

If you're looking for a paranormal fiction novel with a cute romance, then this is definitely a good one for you! I didn't think I would like it, because I'm not the biggest fan of witch-related books, but I'm glad I gave this book a chance. It doesn't hurt that Whipple's writing style had me interested and engaged throughout the story. So, if this seems like your type of read, then definitely go for it!

4 stars. I enjoyed this book a lot more than I expected! Which is always a good thing, in my opinion. Natalie Whipple's novels are alright by me!