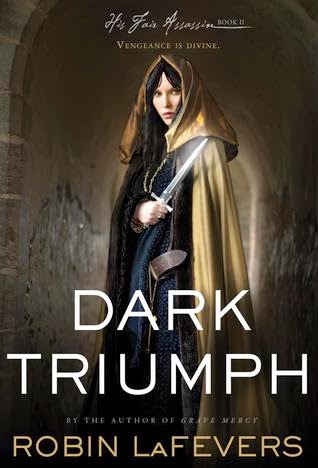 When Sybella arrived at the doorstep of St Mortain half mad with grief and despair the convent were only too happy to offer her refuge - but at a price. The sisters of this convent serve Death, and with Sybella naturally skilled in both the arts of death and seduction, she could become one of their most dangerous weapons.

But her assassin's skills are little comfort when the convent returns her to the life that nearly drove her mad. Her father's rage and brutality are terrifying, and her brother's love is equally monstrous. But when Sybella discovers an unexpected ally she discovers that a daughter of Death may find something other than vengeance to live for...

As many of you lovely blog followers know, I like to choose one book every year that I would consider the best book I'd read during that year. When you read between one hundred to two hundred books every year, that is no easy task. In 2013, that book was Between the Devil and the Deep Blue Sea by April Tucholke. In 2012, that book was Grave Mercy by Robin LaFevers. That being said, this book (Dark Triumph) had some big shoes to fill. That is one of the reasons why I waited so long to read this book - I was afraid of sequel disappointment. I wanted this book to be as amazing as its predecessor (or more so), but knew that that would be difficult, because I LOVED Grave Mercy so very much.

I'll admit, in my opinion, this book wasn't as good as the first book. But I'm kicking myself for being afraid to read it. It was quite amazing! Definitely NOT a victim of sequel slump, which is fantastic. The plot was was not as deep and intricate as the first book's, but picked up on this book's plot as well as the series' overall plot. The characters had a good amount of development to them, and I really enjoyed reading about them. I was happy to see Ismae and Duval in this book, to see how their relationship was. The romance of this book in particular was sweet and subtle, and a tad bit forced in my opinion, but I liked it.

The beginning of this book starts in d'Albret's home. Sybella is a resident there, but she feels like a prisoner. She desperately wishes to escape from d'Albret, from the cruel by obsessive Julian, from the torture of not being able to kill d'Albret, because he does not bear a marque. Honestly, I was a bit lost at the beginning, because I did not expect the setting and the plight of Sybella. This book picks up where the last book leaves off, but somehow, I was expecting something else. But my confusion quickly disappeared.

Sybella escapes when she tries to free Beast from d'Albert's dungeons. She would have stayed, but Beast knocked her out and dragged her with him. I think he could see that she was just as much a prisoner in the house as he had been in the house's dungeons. And when I say "house', I mean "holdings", lodgings, castle, whatever. Property of d'Albert.

I have immense respect for Sybella. I couldn't get much of a feel for her in the first book, but after reading this book, I really like her and respect her. She has been through so much, and it is so different than what Ismae went through.. Both ladies suffered tremendously, and at such young ages. This is testament to LaFevers' skill and research - it makes the heroines more real and authentic, as 15th century young women.

Sybella is ruthless yet selfless. She acts in order to lessen the pain of others, but she does not mind killing. Beast is very similar in this aspect, and I am happy that the romance is between them. Beast is kind and silly, but he is also ferocious and fearless. I LOVE his character. It was even more interesting to see him injured throughout the entire book - it slowed him down, but not by much.

This brings me to the romance. I mentioned that it was subtle yet sweet. I think this is a product of the personalities of the two people of the romance. Both are private, reserved people who have seen and done much. Their romance would not be open and on display. I like that the romance is a reflection of the characters. However, I did have a problem with it (see below).

The plot of this book in particular is simpler than that of the first book. Sybella escapes d'Albert's clutches, and pledges to serve the duchess as well as her convent, but much of the book is just that. Eventually, at the end, a battle much happen, as the entire book leads up to that. The third book will most likely pick up where this battle ended, because we do not get much of the aftermath of the battle.

I liked that this series is not quite a companion series (though I'm sure you could read each book individually), but that there is a plot that threads these books together. Somehow, the duchess must assert her authority, without power-hungry lords trying to taking it away or force her to marry them. The third book will be EPIC - I can already tell. And it's told from Annith's point-of-view - that means she plays a key role in the overall plot. I cannot wait!

I mentioned the romance. While I liked the romance, and I think it really worked in this book, I think it was a bit thrown on the readers. It's painfully obvious that Beast and Sybella will fall in love, and that's okay, I suppose. Maybe. Also, I feel like they don't interact much AT ALL. How did they fall in love? They spent a few days together, escaping d'Albert's terror, and that makes them in love? I don't really see it. I'm going to accept it because in the end, I like them together, but I feel like it wasn't super developed.

Also, there wasn't much to this book specifically, meaning plot-wise. Yes, much is revealed about Sybella and her past, as well as Beast's past, but there aren't that many actual events to this book. It's less politically driven, and more sentimental. That is a key difference between this book and book one, and probably one of the things that disappointed me. Somehow, in book one, LaFevers managed to put together a kickbutt plot with wicked politics, great characters, and a really well-developed romance. In this book, it wasn't the full package. But it was still a good sequel.

I most certainly would! Especially if you enjoyed the first one - if you did, then you will like this one. While I admit that this book wasn't as amazing as the first book one (in my opinion), it still captivated me and left me wanting more from the overall plot of the series. This is a fabulous historical fiction novel, so if you're a fan of the genre, read it!

4 stars. This is a great sequel novel! I'm still quite annoyed with myself, for waiting so long to read this book, especially since I have had a copy of the book since around the time of the release. My loss! I cannot wait to read Mortal Heart - coming out late this year!