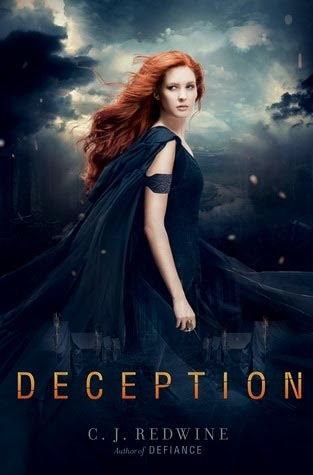 Baalboden has been ravaged. The brutal Commander's whereabouts are unknown. And Rachel, grief stricken over her father's death, needs Logan more than ever. With their ragged group of survivors struggling to forge a future, it's up to Logan to become the leader they need—with Rachel by his side. Under constant threat from rival Carrington's army, who is after the device that controls the Cursed One, the group decides to abandon the ruins of their home and take their chances in the Wasteland.

But soon their problems intensify tenfold: someone—possibly inside their ranks—is sabotaging the survivors, picking them off one by one. The chaos and uncertainty of each day puts unbearable strain on Rachel and Logan, and it isn't long before they feel their love splintering. Even worse, as it becomes clear that the Commander will stop at nothing to destroy them, the band of survivors begins to question whether the price of freedom may be too great—and whether, hunted by their enemies and the murderous traitor in their midst, they can make it out of the Wasteland alive.

In this daring sequel to Defiance, with the world they once loved forever destroyed, Rachel and Logan must decide between a life on the run and standing their ground to fight.

I came to the last page of the book without realizing that THAT was the last page of the book, and I turned the page looking for more of the story, and that was when I hit the acknowledgements. Don't you love/hate when that happens?! The story was so engrossing, you wanted more. And yes, I want more. That was one of the reasons why I waited so long to read Deception - because I knew that once I finished the sequel, I'd be ACHING to read the third book. It's hard, waiting for sequels and whatnot.

Baalboden is in ruins, and the survivors look to Logan for the answers. But the Commander is out there, hunting Logan, for the tech. Logan, Rachel, and the survivors must leave Baalboden and flee to Lankenshire, a city-state that should be safe to stay and recover. But there is a traitor in the midst of the survivors, and people are picked off. And the Commander is hunting. And Logan is spreading himself too thin. And Rachel is breaking apart. No one is safe.

One of the things I really like about Redwine's books is how SMART they are. Everything seems analytic, intelligent, on purpose. Many parts of this book are used to show strategy, or clever thinking, or planning. Logan is the brains behind all of the planning and analyzing, and I really enjoyed following his point-of-view. But seriously, REALLY look at this book, the writing style, the set-up of the plot, and so on. Everything is so carefully laid out, so intelligently placed. I love that about this book (and series).

As I said before, I really enjoyed reading Logan's perspective. Logan is intelligent and brilliant, and he has a good heart. He's so mature, but he's still a young man. He's a natural leader, with subtle flaws and open courage. I love that he uses his brain to figure things out, and not just his heart. He has an excellent balance of good and not-so-good qualities.

I wasn't completely a fan of Rachel in Defiance, although I did (for the most part) like her. It's the same deal in this book, even though I felt frustrated with her at times. But I think I see things a little bit better, in terms of her mental and emotional state. She has been through so much, and has had to deal with so much, and she handles situations and consequences so much differently than others. She bottles it and it consumes her, and this makes me mad, but at the same time, I think I understand her a little better.

The romance has gone through so many trials, both in book one and in this book. I think that's something that Redwine handles well - breaking apart and building up and breaking apart and building up. Rachel and Logan are solid in their relationship, but they aren't completely solid as individuals (with all that's going on, that's hard), and it takes its toll on their relationship. Meaning, they love each other, but finding time to be with just each other is difficult, when about one hundred and fifty people depend and look up to Logan.

The same can be said about the characters themselves - Redwine really picks apart her characters. It makes this novel seem terribly RAW, and real. I say terribly, but I mean it in a good but powerful way. The characters, specifically Logan and Rachel, are pushed to extremes and then some, in this book especially. It's interesting to see the deterioration of the mindset of Rachel and Logan - and how they bounce back. Both are very different characters, in that aspect.

For the most part, this book was a really good sequel. The plot was interesting, although parts of it were kind of boring or felt a little unnecessary. However, I really could not put the book down, because I just had to know who the traitor was, or how everything fit together with Jared and the nature of Logan's ostracism, and how everything connected. Redwine really does weave a tale of betrayal, hurt, survival, intelligence, pain, and love. I cannot wait to see how it ends!

This book runs a little slow at times. It's almost 500 pages, so I'm always kind of bothered when the book is relatively long, and there are slow parts in the plot - enough slow parts for me to notice. I understand that some parts are more analytic than others, but some just seemed unnecessary. I don't know how to explain this without using specific examples, but I don't want to use specific examples because that would totally give away things, and I'm not about spoilers.

Also, it seemed like not a lot happened in this book. That goes hand-in-hand with the slow plot. Granted, things DID happen. But it seemed like the majority of the book was traveling to Lankenshire, and then in the last one hundred pages, they get there, and then the climax happens, and then we get our wonderful sequel cliffhanger. Most of things that happen are subtle, and I totally appreciate subtle, but it's really easy to sum up this book, because not much happens.

I would HIGHLY recommend this book to anyone who read and enjoyed (or even vaguely enjoyed) Defiance, because it is a very satisfactory sequel. I hate it when sequels are horrible (especially after a STUNNING debut or first novel), because then I'm not motivated to finish the series. However, that is not the case with this novel. I am so excited to read the third book!

4 stars. This was a really great sequel! So much angst and heartbreak and flat-out CRAZINESS - but it was awesome and truly enjoyable, and I definitely cannot wait to see how things shape up in Deliverance.