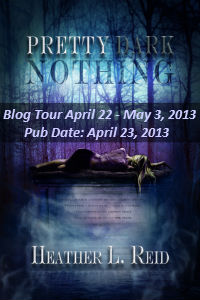 Welcome to the Pretty Dark Nothing tour! Today is my day to promote this fantastic book, and in this post, I have an awesome interview with the lovely Heather Reid, and a giveaway at the bottom of the post!

My tour review for Pretty Dark Nothing can be found HERE. 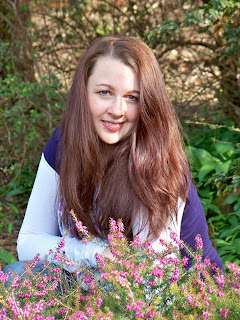 Alyssa: Hi, Heather! Thank you so much for joining me today, here on the blog! Ready for me to pick apart your brain?! :D

Heather: Thanks for having me on The Eater Of Books, Alyssa, I’m so excited to be here! My brain is at your disposal :)

Alyssa: YAY! I shall make good use of it :D My first and favorite question to ask debut authors – how does it feel to be published for the very first time? How about knowing that people are out there in the world, reading your book?

Heather: The feeling of achieving something you've been striving and working toward for over half your life is indescribable. It’s like winning the lottery, getting a new puppy, and marrying the love of your life all on the same day. Exciting and scary all tied up with a giant red bow. It still feels a bit surreal, really, almost as if I’m watching it happen to someone else. I’m not sure the shock has worn off yet. As for Pretty Dark Nothing being in the hands of readers now, in all honesty, it makes me feel a little vulnerable. I’m sure all writers feel this way. I've put my heart and soul on the page and some people will love it and others won’t. As a writer, you hope readers will connect with your work. You don’t want readers to be disappointed, but at the end of the day, not everyone is going to love Quinn and Aaron’s story as much as I do.

Alyssa: What’s the best thing leading up to publication day that you have experienced?

Heather: There have been so many wonderful experiences so far. Seeing the cover for the first time was pretty amazing. Connecting with readers and other authors has also been a highlight for me. But the best thing was being asked to attend Book Expo America in New York City. I can’t wait to talk with readers face to face and hang out with some of my favorite authors. I think I’m going to be a little bit star struck.

(Guys. Everyone going to BEA. GO SEE HEATHER! Have an amazing time at my expense!)

Alyssa: What was the first thing you thought when you saw your book’s cover? (If I may say so, it is SOOOOOO pretty! Definitely one of my favorites so far)

Heather: I cried. And then I cried some more. The cover was even better than I imagined. I was in shock. I must have stared at it for a good hour, pointing to the title and my name and thinking, “This is real. Like really real.”

Alyssa: How did you come up with the title, Pretty of Dark Nothing? Were there any other titles that you thought of, but didn’t like enough to keep?

Heather: My publisher came up with the title Pretty Dark Nothing. The original title was When Darkness Whispers, but there was concern that it sounded like too many other books out there. My publisher came up with a list of alternatives and gave me a choice of two. Pretty Dark Nothing was my favorite and now I can’t imagine it being called anything else.

Alyssa: How did the paranormal aspect of Pretty Dark Nothing arise? What kinds of research did you have to do to expound upon this particular aspect?

Heather: It started with my own nightmares. As a child, I suffered from night terrors and sleep walking. Although I eventually grew out of the sleep walking, the nightmares never went away. I would dream of faceless entities and demons on a reoccurring basis. I spent my pre-teen years trying to rationalize my fear while I spent my nights huddled under my covers with a book and a flash light afraid to fall asleep for fear of what would greet me in my dreams. I kept this a secret from my friends and afraid of what they would think. The dark torture of my imagination lasted through three years of middle school and finally faded. I still don’t think my mother knows how terrified I was of falling asleep and I have no idea why the nightmares stopped, maybe they were my way of coping with the stress of adolescence. I don’t know. When I reached college, I went through a particularly bad time in my life, suffered from depression, illness and the nightmares returned. I wasn't frightened like I was when I was young; I recognized them for what they were. We all have inner demons we battle, those voices that tell us we’re not good enough, taunt us, paralyze us with fear. That’s when the idea for a novel started to form. I asked myself what would happen if those negative voices, inner demons weren't imagined. What would happen if they were real and they started to manifest outside the dream world? What if they influenced things around us and what if you were the only one that could see them? That’s when Quinn and the idea for Pretty Dark Nothing was born. I did quite a bit of research on demons, night terrors, and near death experiences over several years, most of it was done before I started writing as a way to make sense of what I was going through. I never thought it would be used years later in my novel.

Alyssa: The scene when Quinn, erm, does something with her beautiful, long hair – it is definitely a symbolic moment in the book. Describe your thoughts when writing this scene.

Heather: Writing it was emotional for me. I couldn't stop crying. At this point, Quinn feels completely out of control. She’s frightened, the demons are manipulating her but she doesn't understand what’s going on, and she’s struggling in every part of her personal life. Deep down she wants to fight, but she doesn't know how. Her world is spinning out of control and she wants to try and take a piece of that back, at this moment, it’s her way of rebelling, of dealing with all the crap that’s going on around her. When I was writing, I could feel her pain and desperation.

Alyssa: So, there is a sequel to Pretty Dark Nothing (woohoo! After that ending… let me be quiet). Tell me a little of what readers can expect to read in the sequel.

Heather: Throughout the first book, Quinn was in the dark about what the demons wanted and how to fight them. It was very much about her dealing with depression and her personal demons and being manipulated by them. It isn't until the end of the book that she gets a sense of just how wide their influence reaches and finds out they are picking on her for a very particular reason. It’s not just about her anymore. Book two will see a different side of Quinn. A lot will be revealed about her bond with Aaron and her role in keeping the demons from invading the human realm and she starts to understand her purpose.

Alyssa: Is there anything else that you are currently working on? Contracted or not contracted – I know I’d like to know!

Heather: At the moment I’m only contracted for the Pretty Dark Nothing sequel. I am working on several other things though. Two of them are YA, one is a dark fantasy inspired by Beauty and the Beast. I don’t mean a re-telling, the only similarity you would see is a man cursed to become a beast, but he is not a prince, nor does he live in a castle. And the beauty isn't beautiful in the traditional sense. She’s badly burned in a fire and then outcast by her tribe, left in the forest as sacrifice because of her bad luck. It’s in early stages. I’m also working on an epic fantasy/sci-fi trilogy.

Alyssa: Are there any assurances you can give readers? Like, um, a belief in happy endings? :D

Heather: Yes, I believe in happy endings and can promise all your favorite characters will be in book two. :)

Alyssa: And that’s a wrap! Thank you again for being here, Heather! I can’t wait to hopefully do this again next year, with Book Two’s arrival! :)

Heather: Thank you for having me! I would love to come back next year for book two.

Heather L. Reid eats mayonnaise on her fries, loves men in kilts, and met her husband playing Star Wars Galaxies online. This native Texan now lives with her Scottish hubby in North Ayrshire, Scotland, where she wanders the moors in search of Heathcliff and William Wallace.