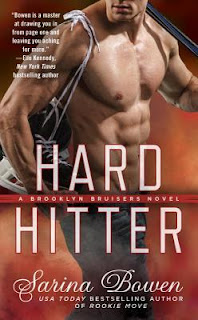 From the USA Today bestselling author of Rookie Move comes the second novel in the series that s hot enough to melt the ice.

He s a fighter in the rink, but he s about to learn that playing nice can help you score...

As team captain and enforcer, Patrick O'Doul puts the bruise in the Brooklyn Bruisers. But after years of hard hits, O'Doul is feeling the burn, both physically and mentally. He conceals his pain from his coach and trainers, but when his chronic hip injury becomes too obvious to ignore, they send him for sessions with the team's massage therapist.

After breaking up with her long-term boyfriend, Ari Bettini is in need of peace of mind. For now, she s decided to focus on her work: rehabilitating the Bruisers MVP. O'Doul is easy on the eyes, but his reaction to her touch is ice cold. Ari is determined to help O'Doul heal, but as the tension between them turns red hot, they both learn that a little TLC does the body good...

I haaaaate writing three-star reviews! Especially a review for a book like this one! I didn't dislike this book. Heck, I think I liked it overall. But I didn't love it, and I just didn't care, by the end of the book. It could be my mood? It could be distractions, like the holidays? Who knows. I should have loved this book, but I didn't. Nor did I hate it though. Hence, three stars!

Hard Hitter is Patrick's story - Patrick and Ari's. Patrick is the captain of the Brooklyn Bruisers, and the enforcer. He's thirty-two and just not feeling all the fighting anymore, but as an enforcer, that's what he does. But it's hard on his body, and his latest injuries force him to finally see the team's massage therapist, Ari. Ari is a peaceful and fun person... who just broke up with her poisonous boyfriend of eight years. The problem is, Vince (the ex) won't leave her, or her home (formerly where he lived too) alone. A little romance between Patrick and Ari might be starting from the massage table, but they have bigger problems than a player-employee relationship.

Best part of this book: Patrick O'Doul. Oh my heart. I thought I liked Leo, in Rookie Move? I definitely like Patrick more. He's older than many of his teammates (though thirty-two isn't old), and he's single. He doesn't like people touching him, and he's often alone. He's a loner, and that suits him, except that he's been lonely recently. No parents, no siblings, no family, and no one leaving in his big, beautiful apartment. Patrick is a quiet guy of few words, who handles his pain internally and doesn't complain. And yet, he's as macho as they come, and deservedly the leader of the team. I. Adored. Patrick. He's such a good guy, under the confident swagger.

So I really enjoyed seeing the progression of his character development. We know he doesn't like being touched from the start, but we don't know why. I like that we discover bits and pieces of him and his past, and then everything comes together. I also love seeing him get romantic! He is the sweetest possible man, as he tries to woo Ari and convince her that he is boyfriend material and that they'd be good together.

Ari... I'll discuss her in the next section. Don't get me wrong, I didn't totally dislike her. In the first half of the book, I thought she was really cool and fun and sweet. She didn't deserve a single bad thing, in terms of Vince and the bad breakup, and my heart hurt for her. It seemed like she hadn't been in love with Vince in a long time. Being with him since age twenty-one meant that there was plenty of time to fall out of love - which is what happened.

I liked the chemistry between Patrick and Ari! At first you don't really get much chemistry because everything is professional in terms of Ari's massages for Patrick. But then those massages start to feel like something else, between the both of them. Patrick intrigues Ari, and Ari intrigues Patrick, and then there is dynamite and fireworks. The chemistry and passion between these two were pretty off the charts!

The romance - well, I liked the romance for the most part, but less so in the second half of the book (and I'll talk about that next). Patrick's romancing was so sweet and thoughtful! I liked watching the pair fall for each other, though I wish Ari would get a clue. I had issues with the romance towards the end, but I liked it overall.

In general, Hard Hitter is a good addition to the series. I liked but didn't love Rookie Move, mostly because I often struggle with second-chance romances. With Hard Hitter, I liked it but was frustrated by the female protagonist at times.

The first half of the book went perfectly well for me! I was enjoying the dynamic between Patrick and Ari. I was loving how much hockey played into the story - how important it was to every part of the story. I was loving seeing Patrick open up slowly, and seeing him and Ari get their hands on each other.

I also couldn't really stand Ari, in the second half of the book. She refused professional help with her ex-boyfriend left and right, because she didn't want the GM to know her "business". You mean to tell me that you have a stalker, drug lord, and abuser harassing you, and you don't want to accept help because you don't want people to know your "business"? What kind of mentality is that? And believe me, I know this mentality - Trinidadians are like that (I'm Trinidadian). It infuriates me to no end. Logically it made no sense for Ari to be so confident that she had a handle on things (she didn't).

What's more, she started to push away Patrick, because she hadn't been single for so long and wanted to "find herself" (or some similar BS). What???? At first, I sort of understood this. But then I kept thinking to myself, you love this man, and this man clearly loves you and treats you like a queen, and you're seriously pushing him because you need to "be single for a while"? Again, logical? I think not.

And that attitude, of course, put a damper on the romance, in the second half of the book. I know, I know. Every romance novel has some sort of "break-up" around the climax of the book, and then the couple reunites and makes up and rides off into the sunset. That's a stupid plot that literally almost all adult romance novels follow and I'm sick of it.

What's more, I couldn't stand Ari's high and mighty attitude, at the very tip of the conflict, when she jumps to serious conclusions and shuts down and refuses to talk to Patrick or let him justify himself. Ladies! This is SO, SO stupid. I feel like after the amount of times I've seen this massively idiotic plot device in romance novels, I should never do this in real life. Communicate! Be mad! But communicate! *tears out hair*

And in general, this book seriously could have done with all that drama at the end, with Patrick. That really did not feel necessary.

Meh. I'm feeling a little disillusioned, with Bowen's books. I don't see the "OMG OMG OMG OMG" appeal. I mean, this is only my second book of hers, but dang. They're not that good?

Again, this could just be me/my mood. But I did not love this book, and I really don't recommend it. I liked it, and I adore Patrick, and the first half of the book was great. But Hard Hitter is pretty forgettable, unfortunately.

3 stars. I might pass on Pipe Dreams. It features a rather rude female (we see her being rude in the previous two books) and a hockey player with a thirteen-year-old daughter (dead wife). Oh, and it's a second-chance romance. I think I'm good. We'll see though.