Review: Falling for the Highlander by Lynsay Sands 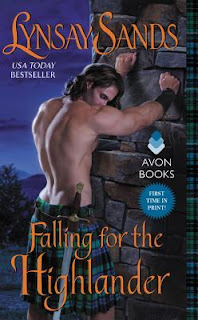 Lady Murine Carmichael has known her share of bad luck. But when her debt-ridden half-brother tries to sell her off in exchange for a few Scottish horses, it’s the final straw. If keeping her freedom means escaping through harsh countryside alone, so be it. She has barely begun her journey when she lands an unlikely escort—the brawny Highlander who just refused to buy her virtue.

Dougall Buchanan was disgusted by Lord Danvries’ shameful offer, but Murine herself tempts him beyond measure. Even bedraggled and dusty, the lass glows with beauty and bravery. Dougall wants to do more than just help her flee. He wants to protect her—with his life and his heart—if she’ll only let him. For Murine may be pursued by a powerful foe, but nothing compares to the fiery courage of a Highlander in love.

There was nothing absolutely wrong with this book, but I just didn't feel satisfied with it. Three stars is not a bad rating but certainly not the best rating either. I don't feel particularly negatively towards this book, but I don't think it's worthy of four stars. I like Sands' historical romance novels and will continue to read them, but I wasn't really impressed with this book.

Dougall Buchanan and his three brothers have traveled to Danvries to settle a deal with Lord Danvries, who wants to buy their horses. But when they get there, Danvries has no money. He offers his sister instead. Dougall refuses and the party leaves... and so does Murine. Murine flees when she hears Montrose (Lord Danvries) offer her to another man (besides Dougall), but she finds herself rescued and protected by Dougall and his brothers. They agree to take her to the MacDonnell stronghold, where their newly married sister Saidh (who is good friends with Murine) lives. Dougall doesn't expect to fall for Murine in the process... and vice versa.

I liked The Highlander Takes a Bride a lot, and so I was pretty excited to see that the series would keep going. It would be awesome to read about each of the Buchanan siblings. Dougall is definitely one of my favorites.

Dougall is gruff and a little grumpy, protective and quietly alpha. He has an air of command and dominance to him, and everyone stops and listens to him. He comes off as prickly, but he's very kindhearted and considerate, selfless even. When the Buchanan men find Murine trying to escape from her brother, Dougall takes her in immediately and does not allow for any argument. He is willing to risk the wrath of her brother (who is her guardian) to see her safe and not forced into doing anything she does not want to do. Dougall is so noble and protective, and I adored him.

Murine was an okay character. She isn't like Saidh; she's not a warrior or a physical fighter. She's prone to fainting and she isn't a violent person. Still, she is a fighter in her own way. I didn't love her, but I didn't hate her. I didn't feel much towards her either way.

The story is pretty interesting and I was never bored. I couldn't want for Dougall and Murine to address the simmering chemistry between them - which was bubbling through the journey, and well after they reached the MacDonnell lands. There is also a bit of a mystery to the story - who is after Dougall? Or is it Murine they are trying to harm?

Sands always knows how to write a hot, steamy romance novel. The chemistry in this book is fairly fan-worthy. I wish there were more, ah, sexy times, and I wish Dougall and Murine got together sooner (the plot of this book is slooooow), but Sands always does a great job with building tension and creating chemistry.

Overall, this was not a bad novel, and definitely not a bad continuation of the series. I was hoping to feel more towards the book, but I don't mind that I didn't totally love it.

Like I said above, I didn't like but I didn't hate Murine. She was okay, not too annoying but also not extremely lovable. I feel like she could have had a little more intelligence? Also I don't see what the big deal about her was - as soon as everyone realized who she was, they started fawning over her. I get that she has done a great deed for Saidh (in the past), but I didn't see anything special about Murine in general. She got a lot of attention from everyone and I didn't really get it.

Also, her fainting issue seemed to fade into the background after a while... I thought that would be more of a thing? I expected the author to dig deep and explore why Murine was fainting, besides the fact that she never ate much. It must have been more than that.

I also don't really understand the resolution at the end, in terms of Murine's father's will. So... it DID declare a certain thing? It didn't? Sands was not clear, at the end, as to what was going on with the Carmichael will.

I really wish Sands wouldn't fade to black, in terms of some of the sex scenes. You could see that Sands was setting up for a really hot scene, but then she would fade to black. OR, she would open a chapter with what was probably the end of a really hot scene... so not satisfying, in a romance novel. This book could have done with many more steamy times. Beginning, middle, and end.

Speaking of, I felt like there could have been more teasing/tension-building, initially, between Dougall and Murine. I also didn't really understand how their feelings for each other developed, because it seemed way too quick and not developed each. The lust, I get, but it seemed like they fell for each other (like, really fell) within two days of knowing each other. Romance novels aren't typically insta-love-y (again, insta-lust, maybe).

The plot of this book is slooooooooow. Oh my goodness, this book was slow. Don't get me wrong, I was never bored and kept reading. But I felt like the story stuck in one certain place for too long. Sands could have added more tension/teasing (in terms of the chemistry/romance), more development of the romance, and more conflict at the MacDonnell holdings, which all would have helped the story progress faster. In my opinion!

Overall, I didn't totally love this book, but I also didn't totally dislike it either. I do enjoy Sands' books (for the most part - I suppose at this point, it's hit or miss), and I won't stop after this one. But this book... it's not the best. I recommend you read it if you love Sands' books and have been dying to read this one. But if you're new to the series, or author, don't necessarily try this one! I could list a bunch of Scottish romances that are better than this one. Not that this book was bad! Just a bland, and possibly formulaic.

3 stars. I am still looking forward to reading more books from this series. But I have low expectations and I'm not expecting to be wow-ed. The previous book in the series, The Highlander Takes a Bride, was so good! This one, meh. Not bad but not great.