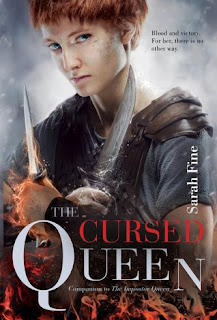 Ansa has always been a fighter.

As a child, she fought the invaders who murdered her parents and snatched her as a raid prize. She fought for her place next to Thyra, the daughter of the Krigere Chieftain. She fought for her status as a warrior in her tribe: blood and victory are her way of life. But the day the Krigere cross the great lake and threaten the witch queen of the Kupari, everything changes.

Cursed by the queen with fire and ice, Ansa is forced to fight against an invisible enemy—the dark magic that has embedded itself deep in her bones. The more she tries to hide it, the more dangerous it becomes. And with the Krigere numbers decimated and the tribe under threat from the traitorous brother of the dead Chieftain, Ansa is torn between her loyalty to the Krigere, her love for Thyra, and her own survival instincts.

With her world in chaos and each side wanting to claim her for their own, only one thing is certain: unless Ansa can control the terrible magic inside her, everything she’s fought for will be destroyed.

While I didn't think this was a terrible follow-up to The Impostor Queen, I'm not totally impressed with this book. I knew beforehand that it was a companion sequel, following the other important girl, the other side of the balance. I loved The Impostor Queen, and perhaps my expectations for this book were too high. My expectations for the author, maybe? This is the thirteenth book I've read by her. This would rank in one of my least favorites by her - though again, it wasn't bad.

Ansa is a fierce and vicious Krigere warrior, and she is hungry for Kupari blood. After the Kupari witch queen decimates the Krigere tribe, the Krigere are forced to combine with another tribe, led by a traitor to the Krigere. Ansa is loyal to the Krigere and to Thyra, the chieftain's daughter. But now Thyra is the new chieftain, and she has been challenged over and over. What's more, Ansa thinks she has been cursed by the witch queen - she is suddenly able to wield fire and ice, uncontrollably. Held captive by the traitor Nisse and unable to control her witch-like powers, Ansa must choose between her unshakable loyalty to her love and her thirst for vengeance on the Kupari. But the Kupari might not be the enemy Ansa is looking to hunt down...

Ansa is so different from Elli, the protagonist in The Impostor Queen. Ansa is bloodthirsty, a true Krigere (despite obviously being Kupari). She has copper hair and ice-blue eyes (signs of the Valtia - though she doesn't know that), but she was captured and dragged to the Krigere when she was five. She doesn't remember that... all she knows is how to be a Krigere; how to plunder and thieve, to kill and to vanquish. The Krigere are warriors, but they are merciless and senseless in their killing. This book was really good in going deep into Ansa's head, and in her past. She has worked so hard to become Krigere, which explains her bloodthirstiness. She is Thyra's wolf, and she is very desperate to be as Krigere as possible and belong.

Thyra, an important secondary character and Ansa's love interest, becomes the new chieftain of the Krigere, and she begins to take the Krigere in a different direction. She doesn't like the murdering and plundering, the stealing and capturing. This makes her seem weak, because she isn't a merciless warrior like the rest of the Krigere. But Thyra is more than a visionary chieftain; she is clever and wants the best for her tribe. Thyra is an immensely important character in this book, and not just because she is the love interest.

So, the female representation in this book was kickbutt. Ansa is fierce (why I disliked at times, but it was good to see at the same time), and Thyra is intelligent and fierce in her own way. There are other tough ladies in this story - for example, Halina, who helps Ansa even when Ansa doesn't know it.

And props to Sarah Fine for the LGBT representation, in terms of Ansa and Thyra's relationship. They struggle with their feelings for each other in this book, so they're not a couple to be exact, but they're getting there. Both have done terrible things behind the other's back, for the sake of the tribe, and both must learn to trust each other again. I liked seeing the development of their relationship; it was good to see Ansa remove the rose-colored glasses she has on when it comes to Thyra. It's not a swoony romance, but the relationship becomes strong.

We only see a few characters from The Impostor Queen in this book, one of which is Sig. I won't say more, but I wish we could have seen Elli and Oskar. But that will definitely happen in book three!

Moving on to the dislikes, because those are plentiful.

I don't know what it was about this book, but I just couldn't get into it. I never felt a sense of urgency while turning the pages; I just didn't care enough. Which is so sad, because I really really wanted to care. I LOVED The Impostor Queen! Why couldn't I love this book. I wanted this book to be just as interesting and wonderful and nail-biting as The Impostor Queen had been; it wasn't.

Maybe I just didn't care about the Krigere, the Vasterutians, Nisse (the traitor chieftain)? There was something about this story that just wasn't doing it for me. I was a little bored as I was reading; I kept waiting for the hook that would drag me into the story, but it never appeared. Maybe I was too invested in Elli and Oskar, and missed their story? I don't know. I just know that I didn't totally love Ansa or her story, and I wasn't satisfied with "this side" of the story. I understand what Fine is trying to do here - tell both sides of the story - but I didn't really love this.

I also just didn't believe in Ansa and her magic. That aspect seemed forced - Ansa coming into her magic, and her struggle with it. It felt like the magic didn't belong in Ansa and shouldn't be there. I know Ansa is the supposed Valtia, but it felt weird that she had the fire and ice magic. I personally think she would make an awful queen, given her temperament and her tunnel vision.

I thought the romance was interesting, but it wasn't swoony or sweeping, like Elli and Oskar's. Perhaps because Ansa was already so in love with Thyra (and vice versa). There wasn't much to the romance; Ansa is practically obsessed with Thyra (which is fine? I guess?), and that's that. I was happy to see Thyra get taken down a few notches, in Ansa's mind. Ansa had made Thyra to be perfect, and it was far from the truth.

The plot of this book drags, to be honest. Ansa and the Krigere are taken to the tribe of the traitor chieftain, Nisse, and he holds them captive. When everyone finds out that Ansa is a double wielder (it's pretty impressive how they find out), Nisse jumps at the chance to use Ansa to destroy the Kupari. Ansa has to learn how to control her powers though. All of this was very... tedious. Uninteresting. The most interesting part of the story was the very end, when several big things were revealed. Even then, meh, okay.

I think I'm mostly just disappointed by how little I was able to connect with the main character, and the story. I just wasn't into it. It wasn't captivating, like The Impostor Queen. The spark wasn't there - literally, and figuratively.

So... I don't really recommend this one. It wasn't Fine's best work. It was a step down from The Impostor Queen, and lacking in something (or perhaps a lot of things). The vibrant world-building and mesmerizing story that Fine usually writes weren't in this book. As a huge Sarah Fine fan, I'm a little disappointed... but I also think it's good if you read/liked The Impostor Queen and have been dying to read this one, that you read it. This "meh" feeling could very well just be me (though I doubt it, since I've seen several DNF reviews on Goodreads).

3 stars. I'm hoping that book three will redeem the series and capture my heart once more. I miss Elli, and Oskar, and the other (more sane) characters of this world! While I appreciate Ansa and her strength, and enjoyed learning more about her and her background, I definitely prefer Elli's perspective. I hope there is a lot of Elli in book three!