Review: Worked Up by Tessa Bailey 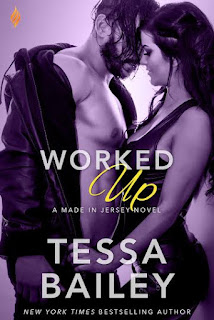 Factory mechanic Duke Crawford just wants to watch SportsCenter in peace. Unfortunately, living with four divorcee sisters doesn’t provide much silence, nor does it change his stance on relationships. But when a fellow commitment-phobe stumbles into his life, getting him good and worked up, he can’t deny his protective instincts.

Samantha Waverly’s brother just put her in an impossible situation. The only way out? Marry huge, gruff, gladiator look-alike Duke—for show, of course. She doesn’t make promises—she knows too well how easily they can be broken—and this is no exception.

As the blistering attraction between them grows, the lines around the no-strings relationship blur. But Duke and Samantha’s marriage is only for show…or is it?

I've read the majority of Tessa Bailey's published books, and I've really enjoyed about 85% of what I've read. There have been one or two that were less than stellar, but still good. This book, unfortunately, is one of those.

Duke Crawford is a head mechanic at the factory in a small town in New Jersey. His house is crazy crowded, with all four of his sisters living with him, as well as his best friend, his best friend's wife, and their little girl. All Duke wants is to watch SportsCenter, but everyone needs him or needs something from him. One night, he's sitting in The Third Shift, the bar in Hook, and a stranger walks in. Samantha turns out to be the step-sister of Renner Bastion, who owns the factory that Duke and half the town works at. Samantha just broke off her engagement with a man she barely saw, but this throws a snag in her plans to start her own business. Her step-brother agreed to cosign a loan with her when he knew she was getting married. But now that she's recently broken off the engagement, Samantha knows Renner won't go through with the loan. But the agreement was if Samantha was married... so Duke and Samantha agree to get married. But what happens when you bind two commitment phobes together, after only a few days of knowing each other?

I knew I would like Duke, and he was probably what kept me reading. I've been following Tessa's #PMB updates in her Facebook group, and they're so fun! PMB = pouty man bear, and it's actually the best thing. I don't typically like huge bearded guys, but Tessa's PMB Facebook series is great. And Duke is definitely a PMB! He's gruff and a man of few words, massive and Goliath-like in size. But he's a sweetheart, letting his best friend/best friend's wife/their daughter/his four sisters live in his house. Duke is a sweet guy, a caregiver and a protector.

I liked Samantha's sense of humor. She likes to make bad jokes and puns, and I found her hilarious in this aspect. I LOVE bad jokes. Samantha has commitment issues because of her and Renner's parents, and ultimately, Samantha's commitment issues are what lead to the main conflict and climax of the book. Samantha had good depth, and I liked her sense of humor. I'm just not sure I liked her as a character in general? I felt a little meh about her, though I do have some things to complain about.

The story flowed well, so I was never bored. I thought time moved way too quickly, but the writing didn't feel rushed. Logically though, things happened too quickly. Samantha and Duke's connection kind of just springs up, and then the lust does, and then love. I will say that this book is pretty steamy, but not too steamy. See more on that below.

I don't think I have anything else to say in this section. This wasn't Tessa's best, and definitely not a favorite. I'd skip it if I were considering buying it.

Holy guacamole, this story happened in lightning speed. Like, I think Duke and Samantha knew each other for two days before doing the deed. And then they got married on Night #2. And then we reach the climax of the book on Day #3. And then a week passes with them apart. And then they see each other again and it's like the heavens opened up or something. The reunion is NUTS.

The engineer and logical person that I am cannot shake the mechanics of this relationship. They fall in lust and then in love in less than a week... it seems bizarre to me. And I'm a self-proclaimed helpless romantic! It was bizarre, peeps.

Also, this book wasn't NEARLY as hot as I expected. The one or two sex scenes felt so prolonged, almost tortuously so. Like at some point in the scene, the sex stopped seeming hot and starting seeming over the top. I got bored.

And the dirty talking... meh. Usually I don't mind dirty talk. But the dirty talk in this book did nothing for me. If anything, I was a little turned off at some points.

But what really bothered me about all the steamy stuff was, as I mentioned, the distinct decrease in hotness (compared to Tessa's other books). Tessa always finds ways of making each of her romance books very unique. She always has her characters trying some new or exotic position, or she has the sexual tension building differently, or the foreplay is wildly imaginative and totally hot. In this book... meh. Tessa has written more inventive scenes. Does that make me sound pervy?

Samantha bothered me, especially towards the end. You all KNOW how much I hate it when the male is the one who has to beg and grovel and make a big grand gesture to win back the girl, right? ESPECIALLY in situations where the girl messed up, or the girl needs to be the one apologizing and groveling and begging. Well, in this book... Samantha messed up, and she should have been the one looking back and trying to convince Duke to take her back. Not the other way around. So this made me mad.

So the first two books in this series were pretty good, but this book felt like a bit of a letdown.

Ehhh, not really. There are tons of other Tessa Bailey books that I'd recommend (like Officer Off Limits! Or Raw Redemption. Or the first book in this series.). This one felt like one that you would miss in a crowd. It's worth the read if you're a mega Tessa Bailey fan like me, but then, you might find yourself a tiny bit disappointed, like me. And if you're not a crazy fan like me, then skip this one. I could recommend so many other romance novels!

3 stars. I think I've lost a bit of interest in this series. It started out well but it's been downhill for me, slowly but surely. I was excited to read Renner's story after reading book two of this series, but now, meh. I'll probably pass.