Welcome to the publication day of Dare To Stay by Jen McLaughlin! I've read this book and I really liked it. Find out more about the book below, and enter the giveaway! 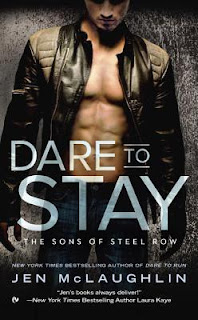 Bruised and bloodied on Boston’s mean streets, Chris O’Brien is reeling from the loss of his childhood best friend. But after barely escaping a hit placed on his head, Chris is desperate to live. A safe haven comes to mind—the home of the perfect girl from his childhood, Molly Lachlan. Before he has fully considered what it would mean to involve her in his mess, he finds himself on her doorstep.

When Molly agrees to let Chris inside her home, she realizes she’s also letting him into her life. Danger and desperation are coming off of him like steam, and yet she can’t bring herself to turn him away. His bad boy charm always had a hold on her, but now there’s a soulfulness and sorrow in him that she’s never seen before. And despite the heart-stopping risk of helping him, she hopes against all reason that he’ll stay...

Jen McLaughlin is the New York Times and USA TODAY bestselling author of sexy books with Penguin Random House. Under her pen name, Diane Alberts, she is also a USA TODAY bestselling author of Contemporary Romance with Entangled Publishing. Her first release as Jen McLaughlin, Out of Line, hit the New York Times, USA TODAY and Wall Street Journal lists. She was mentioned in Forbes alongside E. L. James as one of the breakout independent authors to dominate the bestselling lists. She is represented by Louise Fury at The Bent Agency.

Though she lives in the mountains, she really wishes she was surrounded by a hot, sunny beach with crystal-clear water. She lives in Northeast Pennsylvania with her four kids, a husband, a schnauzer mutt, and four cats. Her goal is to write so many well-crafted romance books that even a non-romance reader will know her name.

One of the roustabouts tossed me a narrow-eyed look, trying to get a read on me, no doubt, and I stared right back at the little shit. I might be keeping my guard up, but that didn’t mean I was sitting here wallowing away in fear of my impending death.

People lived. Then they died.

A crate hit the ground, causing a huge boom loud enough to awaken a deaf man. I growled and stepped forward, my fists tight at my sides. Striding forward, I moved right up to the two men who’d made the racket. One was a new recruit who’d joined when I’d been locked up, and the other was a potential member. “Can you maybe manage to unload our merchandise without, oh, I don’t know, waking the entire police precinct? I rescheduled this for a reason.”

The potential, who’d dropped it, flushed and lowered his head. “Sorry, Mr. Donahue.”

“Hey, it’s not my fault he’s an idiot,” the worker bee said.

I didn’t know him, but I knew for a fact he’d been born and raised in the same shit hole we’d all come from in Boston—a neighborhood near Southie that had been coined Steel Row. Probably in his twenties, he was the same redhead who’d been eyeballing me earlier. His glare filled with an unspoken challenge, he wore a baggy shirt, a pair of ripped jeans, and a bad attitude. He had muscles that rivaled a line- backer’s, but that didn’t matter. I welcomed the confrontation.

That’s what I used to like about this job. It kept me on my toes. But everything was too damn easy now. It bored the hell out of me. I cocked my head and crossed my arms. “Is that so?”

“Maybe you guys should get rid of weak links every once in a while and this kinda shit doesn’t happen. What was Scotty thinking, sending you here to run things you know nothing about? Exactly how long were you in for, anyway?”

I closed the gap between us and stared the man down. He wanted to challenge the bear? Then he’d get the bear. “Loyalty is rewarded, you little shit. I did my time, and I kept my mouth shut. If the ATF came swooping in here right now, could you do the same?”

“Answer me.” Without another word, I unholstered my Sig P229 and pressed it dead center to his forehead. My voice was calm and deep and I made sure to speak slowly. “Because the way I see it, there’s only one other option in this world.” Staring him down like the rat he was, I tightened my grip on the trigger enough to make him sweat. “So. You tell me. What’s it gonna be?”

The man swallowed hard but didn’t back down. I almost admired that, but he was too much of a dipshit to appreciate the value of his courage. Instead of answering my question properly so his brains didn’t end up on the dirty docks, he asked, “You gonna pull the trigger?”

My finger twitched even more. For a second, I wanted to do it just to shut the idiot up. A little peace and quiet would do a hell of a lot for the headache building behind my eyes. But even though I was in charge here tonight, this was my brother’s crew. It wasn’t my job to decide if I needed to rid us of yet another fuckwit. That choice would be up to Scotty.

The point had to be made that nobody should mess with me and that I wouldn’t tolerate insubordination from an underling. All around us, the men watched, waiting to see what I would do after that blatant display of disrespect. I’d been challenged, and it was time to show the rest of them why they shouldn’t do the same.

Forcing an easy grin, I shrugged and slid the gun back into my holster. “No, I’m not going to shoot you. That would bring the boys in blue on our heads, and I don’t want to be behind bars again. Not yet, anyway.”

“Yeah.” The man looked at his buddies, grinned, then tugged on his shirt like he was some thug that had flirted with the devil and lived to tell of it, before turning back to me. “That’s what I thought, man.”

“Sir,” I said from between clenched teeth, still grinning.

“I said”—I rolled my sleeves up, slow but sure—“you should be calling me sir. I am in charge of this run, and as such, I own your pathetic little soul tonight.”

The man paled, watching my movements with wide eyes. When I took a menacing step toward him, he stumbled back one step before he forced his feet to stand still. “Y-You’re not my boss. I work for your brother.”

“My brother runs this little crew, yes. While I—?” I grabbed the front of the little fucker’s shirt and hauled him close, nose to nose with the twat. “I’m higher up the food chain, because I’ve worked my way there by following the rules. That puts me in charge of everyone on this dock. Did no one teach you about hierarchy? About showing respect to those who can get your death written off as an acceptable loss?”

The man gripped my forearms, shaking his head. “I get it, man. I get it.”

The man let out a scared little whimper. So much for that budding respect for the man’s balls. They’d shriveled up into the size of raisins at the slightest sign of danger. “D-Doug. Doug Pearson. Look, I’m—”

“Shut the hell up.” I shoved Doug backward, sick of hearing his voice already. “When you speak, it hurts my head.”

“Jesus Christ, you don’t get it, do you? Let me show you how to listen to your superior’s orders in this crew.” Hauling back my fist, I punched him in the nose, grinning as the sound of his septum cracking into pieces filled the silent night. Still, that wasn’t enough. Man, I’d missed the feeling of things cracking under my fists.

When Doug hit the ground, his hand pressed to his bloody nose, I grabbed his shirt, forced him to his feet, and punched him in the gut. As Doug doubled over, wheezing for breath, I leaned on the injured man’s back as if he was a piece of furniture. To me, he was. He was here to do a job, and that was it. When he stopped being useful, I’d toss him in the garbage with the rest of the shit that was no longer of any use to me. “You stand the hell up when I’m teaching you a lesson, and you shut up, too. And next time, you damn well better call me sir.”