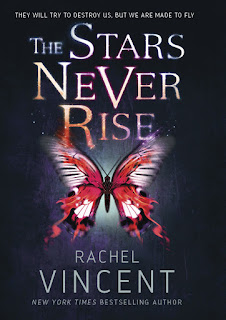 I'm so glad I decided to binge-read this duology! The publisher sent me an unsolicited copy of this book (which did not affect my opinion in any way), and then book two, and I knew that was a sign. I've had my eye on this series for a while, but never pushed myself to read it. I'm glad the opportunity was presented to me though, because I enjoyed the series!

Nina Kane is coming up on seventeen years old, and something is happening to her. One night, while sneaking back home after a grueling night of work, she comes face-to-face with a demon - and incinerates it with her hands. Nina discovers that she is an exorcist - a real one - and what the Church have parading around as exorcists are not real. In fact, the Church has been lying to everyone for years, feeding lies about demons and exorcists and souls. Now, Nina must find a way to rescue her fifteen-year-old pregnant sister, who the Church took because of her pregnancy, and because they want to use her to draw Nina back. Nina must run for her life in order to save Mellie, and she joins with Finn and a team of real exorcists who are determined to decimate the demon hordes.

When I first saw that this book was about exorcists, I was a little nervous. I was thinking of those old-fashioned exorcisms, in which a person is tied down and there is a priest and he yells "Come out of him, Satan!" or something. And I didn't particularly want to read a book about this. So I was excited to see that Vincent's type of exorcism is fire, shot from the exorcist's hands. Which is neat!

Nina is so strong, so independent, and has had such a difficult life already. With her mother's health declining, Nina has been taking care of herself, her mother, and her sister. When Nina finds out that Mellie is pregnant, panic sets in a little. Pregnancy must be planned and licensed, and Nina did neither of those things. And when Nina kills a demon, who happened to be her mother, the Church comes after Nina in order to silence her. Crazy, right?

I like Nina and respect her so much. My heart broke for her, and the hard decisions she had to make. But I love how strong she is, and how this strength translates into her exorcist abilities in a way. Nina is a kickbutt exorcist, with training. Meeting Finn and the gang made Nina stronger.

Finn is a weird character, and I won't get into that. But I like him. He's the love interest, and I think he and Nina are great together. Finn is playful and flirtatious, but it's clear that he likes Nina from the get-go.

Other characters include Maddock, who is sweet but a little troubled, Devi, who is mean and territorial (and also Maddock's girlfriend), Reese, who is big and tough, and Grayson, the only one who isn't an exorcist (she's also Reese's girlfriend). I liked all of these secondary characters, even Devi (who is annoying but also hilarious at times).

This book focuses on Nina's transition into exorcism, as well as rescuing Mellie, and uncovering secrets that the Church has been hiding for so long. We all know how shady and cruel the Church is, but it runs so deep. Demons and the Church are more connected than our characters thought!

You can probably already tell, but this is a dystopia/post-apocalyptic type of world, with the Church as the "leader", and the war with demons being the "apocalypse" (or the "before" part). From the start, we as readers don't trust the Church.

The romance is weird (and it's because of something with Finn), but it's cute. No love triangle or anything like that, but it's a weird one. I liked it though. Finn and Nina work around limitations, and you can pretty much see where that thing will go. Which will probably happen in book two, and it'll make the romance even better!

So I liked the characters. I liked the romance (it was a little slow, and sometimes weird, but cute). I liked the story (so much action, fleeing, etc.!). Overall, a really great book!

Like I said, the thing with Finn and the romance is weird. Not necessarily awful, but weird. When I first read that, I did a mental double-take. Weird! But anyway, it was fine in general, but weird too. I would have liked to see more between Finn and Nina physically, too!

I was a little concerned about the whole exorcism concept, but it's totally not what you think it will be! Vincent's version of exorcism is very different. So if that's a thing that's worrying you, don't let it. I liked this book and I see why it did well. I'd recommend it!

4 stars. A good start to the duology. I'm glad I get to binge-read the books, because the ending of this book makes me want book two now. Not quite a cliffhanger, but still a hooking ending. This was my first YA book by Vincent, and it was pretty great! 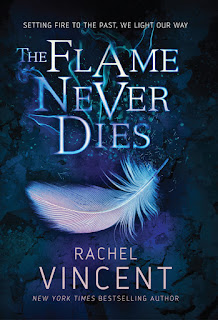 Not a bad way to end the series! I think I might have liked The Stars Never Rise more, but not by much. This duology in general was very solid, very well-written and definitely worth my time.

In this sequel, Nina, her pregnant younger sister, and the exorcists are trying to put as much distance between them and the Church as possible. But things are not that easy; the demons are possessing the bodies of any healthy human they can find, and it isn't always obvious. In the badlands, it's tough to survive. Mellie is due in a month, and Pandemonia, a city of demons, is looming. Kastor, the "leader" of Pandemonia, wants exorcists alive. Nina must decide if she will face Kastor, or give up everything for Mellie's unborn child.

The title of this book is so fitting in so many ways. Which flame are we talking about? The flame of the exorcists? The flame being a metaphor for the baby? The title could work either way, and I think it's a great title. And it matches the pattern of the first book's title!

This book had a different feel compared to book one. It's less about Nina and her difficult life and her taking care of her family. In this book, Nina is bent on helping her sister and unborn nephew or niece, but she also finds that she wants to fight the demons that keep coming. Protecting Mellie and fighting demons prove to be difficult, even for the exorcists. But Nina is unshakable in her determination to get Mellie to safety, and to ensure that the baby will be born healthy and live.

Nina has flourished as an exorcist, and she works well with the team. Finn, Maddock, Reese, and Devi are also exorcists, and Grayson is waiting for her abilities to be triggered. Attack after attack prove over and over that this young group of exorcists are brave, selfless, and intelligent.

It all comes down to Kastor and Pandemonia, and you know it's coming. With the group in the badlands, far from the Church, there is plenty of foreshadowing in terms of Pandemonia. The ending of the book is fairly satisfying, with a lot of action and twists and turns.

I thought the romance was a little less present in this book, in terms of Finn and Nina, but maybe I was hoping for too much! Still, the romance is sweet and light, and there is no love triangle. I consider that a win!

I won't say too much more so as not to spoil anything, but I enjoyed this story and I'm glad that it's a duology, because things ended fairly well. There are heartbreaking moments and terrifying moments, but the ending is satisfying. Definitely how I like to see series end!

And, like, I said, there was probably less romance in this book! I expected more romance, so you can see why I might be just a little disappointed here. Just a little!

If you read book one, I highly recommend this book! It's an excellent conclusion, filled with action and high stakes and surprises. It'll keep you on your toes!

3.5 stars -> rounded up to 4 stars. I think I liked the first book better, BUT, I liked this one too. Both are good, and I'm glad I was able to give each a chance.