Review: This Earl is on Fire by Vivienne Lorret 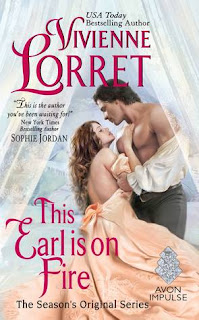 The sheltered daughter of a country baron, Miss Adeline Pimm comes to London looking for adventure… and finds it in the form of a bloody, unconscious man slumped in the doorway of her family’s rented townhouse. Though his identity is a mystery, Adeline is inexplicably drawn to the handsome, injured man and vows to nurse him back to health.

Liam Cavanaugh, the scandalous Earl of Wolford, is startled when he awakens in an unfamiliar bed, wrapped in bandages that hinder his eyesight, with no memory of why he was beaten half to death. Although he can’t see the witty young woman who tends to his wounds, her alluring voice—and a single stolen kiss from her soft lips—helps soothe his pain. But when he is fully healed, Liam is not ready to let go of the one woman who stirs his deepest longings.

Liam will do whatever it takes to see Adeline again, even if it means giving up his rakish ways. But his disreputable past is not so easily forgotten and his secrets are far more dangerous than he—or Adeline—ever imagined.

Adeline Pimm lives in the country with her parents, the baron and baroness of Boswick. She's always been sheltered, partly because of her limp, caused by a deformity in her leg. They've come to London for the first time for Adeline's season as a debutante. But they come to their rented London home to find a gentleman at their doorstep, bloody and unconscious. The Pimms are very kind and softhearted, and take care of the gentleman at the house. Liam Cavanaugh can't remember how he ended up where he is, or why or how he was beaten up. But as he is lying in bed, bandaged and bruised and unable to see for the time being (due to a bandaged head), he finds himself allured by the woman who won't leave his bedside. Adeline begins to care for Liam long before she actually seems him and knows who he is. What happens when two people who refuse to marry anyone fall in love? This is the sweet story of Liam and Adeline finding their way to each other.

What a cute story! We have Adeline, who is a bit naive and sheltered and believes that many marriages are based on true love, and love at first sight. When they find Liam on their doorstep, Adeline feels... something, in her heart. It isn't quite lust because she can't see him under all the blood. Could this be her soulmate? Time will tell.

Adeline is brave and strong and fearless, braving the ton with her limp. A deformity is frowned upon, and Adeline is talked about because of it. The Pimm family also takes a hit because they took in the notorious rake, the Earl of Wolford, and no one believes that he was actually beaten up until weeks later when he leaves the Pimm residence and he's still bruised. During that time, Adeline begins to care about Liam, and is sad to see him go.

And then we have Liam, who isn't as rakish as we're led to believe. Sure, he's a flirt, and he's charming. But he hides behind walls of loneliness and sadness. He doesn't want to marry until he's sixty and needs an heir. He likes to buy and collect antique archaeological finds, and he has many, many houses full of them. Including the house next to the Pimms' residence! Which is how he ended up on their doorstep, bloodied and beaten. He had been on his way to one of his houses.

I liked reading from Liam's POV more so than Adeline's, because Liam had more depth and more sadness to him. This book isn't angsty or anything, and Liam's "dark past" isn't so terrible, but Liam has had to lead a life of mistrust and caution, when it comes to people. He hides behind his rakish reputation because he doesn't trust people. I wanted to give the poor guy a hug at so many points in the book! But then he's also a huge flirt, and he's funny.

The chemistry between these two is fairly sizzling! There is only one sex scene in this book, but all of the foreplay/"almost" scenes are pretty hot. I've noticed that Avon Impulse books are very low on the steamy radar, so I expected this. If I were giving this a steamy radar rating, it would be maybe two out of five. Which is not necessarily a bad thing!

The romance itself was cute to watch unfold. Adeline clearly falls for Liam, as much as she doesn't want to admit it. Liam falls for Adeline but realizes it slower. Both of them don't want to marry (Adeline, ever, and Liam, only when he's sixty). Liam tries to avoid Adeline because he thinks she'll marry and he doesn't want to ruin her. But they both fall for each other, and while Adeline might be a naive country girl, she still goes after what she wants.

I liked seeing Adeline's character growth in this story. She goes from naive country girl to assertive country girl turned noblewoman. And Liam grows even more than Adeline does; he learns how to be less reclusive and lonely, and he reassesses what he wants in life, and shifts his priorities.

The mystery of Liam's attack was solved at the very end, and I personally didn't see it coming until just before it was revealed. It's an interesting twist! We also learn the full secrets of Liam's "dark past", which was sad. So I'm glad that the author tied everything back together.

This book was a solid sequel overall! I think I liked Jack and Lilah's story better, but I enjoyed Liam and Adeline's. I'm excited for Max and Juliet's!

More steamy scenes would be good! This book only had one sex scene, which really doesn't seem like enough in a historical romance novel. But Avon Impulse's books seem to be less steamy (which could be good or bad). I vote more steamy, please!

I don't have many complaints, but this book isn't a new favorite, so it's only getting four stars from me! I'm very stingy with my five-star ratings, and this book definitely did not feel like a five-star novel. It was good though!

I'd probably recommend The Debutante is Mine more than this one, but this book was also great! The series is a cute one, but not a must-read series. I like the idea of the Originals, so the connection between the stories and characters is cool. If you're an HR fan, these books are not too shabby - and they're fairly cheap!

4 stars. I'm excited about When a Marquess Loves a Woman! I feel like this series has been leading up to Max and Juliet's collision. Here's hoping it'll be good!