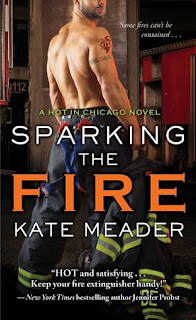 Kate Meader’s blazing Hot in Chicago firefighter series has “everything you want in a romance” (RT Book Reviews, Top Pick)! The flames of desire burn out of control in this sexy third novel when ex-lovers unexpectedly reunite for a sizzling affair that will have the director yelling, “Quiet on the set!”

Actor Molly Cade, America’s fallen sweetheart, finally has her shot at a Hollywood comeback with a dramatic new role as a tough-as-nails firefighter that promises to propel her back to the big time and restore her self-respect.

Wyatt Fox, resident daredevil at Engine Co. 6, needs a low-key job to keep him busy while he recovers from his latest rescue stunt. Consulting on a local movie shoot should add just enough spark to his day. Especially when in struts Molly Cade: the woman who worked his heart over good, and then left him in the Windy City dust.

Their story is straight out of a script: irrepressible, spunky heroine meets taciturn, smoldering hero. But these two refuse to be typecast, and when the embers of an old love are stoked, someone is bound to get burned…

I'm disappointed. I liked Meader's adult romance series with Entangled Brazen, and I had high hopes for this new book. I've not read the previous two books in this series, but Meader's books in general have worked for me. This book disappointed.

Something I want to point out - I think many readers will really enjoy this book. I have a feeling that my issues with this book are very specific to me. So, don't be thrown by the rating (unless what I say in the "What I Did Not Like:" section resonates with you).

Wyatt Fox and Molly Cade met five years ago, and shared a week of nameless sex. Then Molly walked away, and five years later, they are thrown together. Wyatt has been following Molly's acting career in those five years, watching all of her movies. But Molly didn't know who Wyatt was. Lo and behold, Wyatt is one of the Dempsey siblings working for the Chicago Fire Department, and just who Molly needs to persuade to help her with her latest movie. Sparks fly between these two as their physical flame is rekindled instantly. But can they have a relationship beyond physical attraction?

I liked Wyatt a lot. He's a former Marine, now a really good firefighter. He was a sniper when he was in the Marines, and now he saves lives. Wyatt has the brooding, tall, dark, and handsome thing going on, but somehow he's not a walking cliche. Like, he doesn't seem like the typical brooding hero. He's not arrogant and cocky, though he is loyal and alpha and protective and a little possessive. Wyatt has a lot of hurt and misery stored up, and he wants to do right by his (large) family. When it comes to Wyatt, everyone comes first, and then everyone else, and then Wyatt.

Usually I'm kind of anti-large-family in books, but I liked this large adoptive family of brothers and sisters (and now, in-laws). The family dynamic is so great, very tight-nit and protective. There is someone new to the family in this book, and I will say that Wyatt does NOT have any secret children.

I suppose the story was interesting enough to keep me reading, and I wasn't bored. But I had one large issue with this book, and it pretty much drained all of my enthusiasm for this book. More about that below!

Here it is -- I hated Molly. I could not stand that woman. And let me just get this out of the way - I think many readers will have no problems with Molly, and will really like her and see her as bold and feisty and feminist and blah blah blah. Me? I thought she was annoying and waaay into people's business and rude and pampered and definitely a diva.

Reason #1 why I don't read books with actors/actresses -- they are divas. It doesn't matter to me how "down-to-earth" the author tries to make them. They always come across as divas, and pampered. Molly is no different. She is so used to getting what she wants (at least, to the paparazzi), and she's good at throwing tantrums left and right.

She's also good at being incredibly bossy and nosy and all up in everyone's business like she's everyone's mother or something. She's so out of line! She acts like she's a part of Wyatt's family, and can make him do things that involve his family. Um, no. Honey, you're not part of the family, you've known them for a few DAYS, maximum. You don't get a say in how Wyatt does things in the family. You don't get to yell at him for doing whatever he needs to do with his family that you don't approve of. Nope.

Molly is just way too used to getting what she likes. What's more, she is horrible to Wyatt. She is constantly fighting with him and pushing him away, and yet, she wants him to have sex with her. Mixed signals much? Rude much? She hates that he feels so protective of her (because God forbid a man feel protective of the woman he loves).

Let me rant for a second - this is a good example of "feminism" that I can't stand, and it's clear that the author is trying way too hard with the feminism aspect in this book. I am 100% for women standing up for ourselves and not letting men (or anyone dictate) our lives. I am NOT okay with a woman feeling like she is invincible and needs no man and must set him straight at every turn.

Because that's a little sexist too. I found no issue with Wyatt's behavior and displays of protectiveness. But Molly just couldn't let him be loyal to her. And in the end, she pushes and pushes and make him think that she thinks he's not good enough. Ugh! Rude!

The icing on the cake is one of my pet peeves - when the woman f**ks up, but she doesn't beg and grovel and fight for her man, and instead, the man is the one that makes the grand gesture. Yup, that scenario is ALL OVER this book's ending. There seriously needs to be a warning label for these types of books/endings, because I seriously can't stand them. YOU f**ked up - own it! Apologize! Go to him! Talk! Communicate! Molly's half-a**ed "gesture" is more for herself than for Wyatt, and it's incredibly selfish in regard to her relationship with him.

Did I mention that she's an actress? She's a drama queen one too. You can see the author trying to get reader sympathy for her, by hiding her behind the tragedy of her ex-husband leaking her nude photos on the internet (which, in her defense, is very sad and I feel for her). But that doesn't excuse the fact that Molly is a shallow drama queen and I didn't like her.

And on a shallow note - this whole book is centered around firefighters. Why the heck were there no fires to be fought? OR firehouse sex? OR Wyatt in a sexy firefighter uniform? I feel so cheated. The firefighter aspect is not used at all, it's like the protagonist could be any profession. *sigh*

Plus, the steamy scenes were so lackluster... basically everything except the male protagonist was so wrong in this book.

Nope, I do not recommend this book. Meader can do better. Or maybe this is her "better" and I just can't stand it. Guys, I'm all for feminism, but not the feminism in which a woman pushes away a man (especially the man she supposedly loves) because she feels like she has to prove something. That's just... dumb. So dumb. This book was one of the worst romance novels I've read in a while, that I had been looking forward to reading.

2 stars. I feel bad for rating this book so low because I had been looking forward to reading it, but it is what it is. Like I said before, I foresee most readers loving this book. But, because of the female protagonist, I could not get into the story like I'd hoped.