Review: When Life Gives You Demons by Jennifer Honeybourn 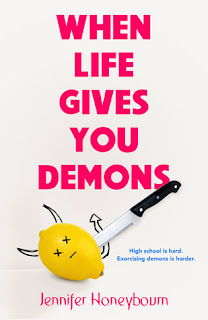 Sixteen-year-old Shelby Black has spent the past year training to be an exorcist. Her great-uncle Roy—a Catholic priest and Shelby’s guardian—believes she has a gift for expelling demons, and he’s put her through exorcist boot camp hell, but he still doesn’t trust her to do an exorcism on her own.

High school is hard enough without having to explain that you fight demons for a living, so Shelby keeps her extracurricular activity quiet, especially from Spencer, her cute math tutor. Secrets run in Shelby’s family, though: her mother has been missing ever since an exorcism went horribly wrong, and Uncle Roy is tight-lipped about it. But Shelby’s hell-bent on finding her mom, no matter what—even if what it ends up costing her her soul AND a date with Spencer.

I adored Jennifer Honeybourn's debut novel, Wesley James Ruined My Life, and I've been pretty excited about her next standalone, When Life Gives You Demons. First - can we take a moment to appreciate the cover? I think it is fantastic. Simple, yet eye-catching and it makes you giggle a little. I breezed through this book and I really enjoyed it as I was reading it. If you are looking for a quick, hilarious read, this is one for you!

This book is centered around exorcisms, which is a rare topic in YA lit. Shelby's uncle is a priest, and a very skilled exorcist. He has been training Shelby to be an exorcist, but Shelby isn't all that great. Shelby hides this "hobby" of hers from everyone, including her best friend Vanessa, and her cute math tutor Spencer. What would her friends think if they found how she exorcised demons? Shelby might not have to wonder for long, because something dangerous is happening in the demon world, and it could affect her family, her friends, and her budding relationship with Spencer.

I love the light tone of this book. It deals with exorcisms, which can get pretty heavy and/or pretty horrific, pretty quickly. Exorcisms are usually the topic of horror films, and I don't do horror - no thank you. There wasn't anything terrifying or scary about this book - for the most part, the tone was light and funny, though the climax got a little more intense.

This book is set in modern times but with a definite paranormal touch to it, what with all the demons and exorcisms. Of course, it depends on what you believe in, these things could be supernatural to you. The concept of Catholicism and religion is important in this book, but not overwhelming, if that makes sense. Religion isn't forced upon the reader.

Shelby is such a funny heroine to follow. She really wants to do an exorcisms by herself, but her uncle doesn't trust her. She really wants to express her interest in Spencer Callaghan, but doesn't want to get rejected. One thing that Shelby is dealing with is the disappearance of her mother - nobody knows where she is (though Uncle Roy has been telling people that she is visiting relatives in Italy). Shelby is a fun person, persistent and a little vulnerable too.

Spencer is a secondary character but a very important one. He isn't just a love interest - he plays a big role in the rising action of the book. He's a good guy, and a cute love interest too. He's one of those sweet, nice boys, not a dominant alpha male (nothing wrong with either type of guy). I adored Spencer.

I liked Shelby and Spencer's quiet friendship (though it budded into something more, which was adorable.) I also liked Shelby's friendship with Vanessa, which was very positive and healthy. Shelby's parents weren't in the picture, but she had a strong relationship with her uncle. Positive relationships were a very good part of this story.

The ending gets really intense, though still light in terms of the mood. This book was really fun and light to read, a quick read that had me smiling and laughing and occasionally swooning. The ending is sweet and a HEA for everyone. Very satisfying!

More swoons! I wanted more swoons for sure. This is a Swoon Reads novel, after all. More swoons is never a bad thing!

Contemporary romance fans will like this one! You don't need to be a PNR fan to enjoy it. And it's not super religious so if you're not into books with religion, don't be put off. The religious aspects are there, and it was cool to see that (so many YA books avoid the topic of religion), but it wasn't a Big Thing in this book (like a statement type of thing, or a theme). Exorcisms were definitely there, but not in a horror kind of way. I liked the book!

4 stars. I have to commend Jennifer Honeybourn for her unique story and creativity! I'm not sure I would have picked up this book had I not read and loved the author's previous (unrelated) book. When Life Gives You Demons was funny, swoony, creative. I'm excited to read what Honeybourn comes up with next!