Review: On His Watch by Katie Ruggle 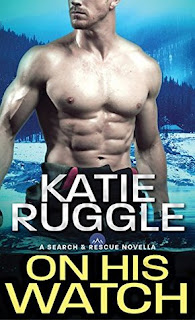 In the remote Rocky Mountains, lives depend on the Search & Rescue brotherhood. But in a place this far off the map, trust is hard to come by and secrets can be murder...

Ice rescue diver Derek Warner never meant to be a hero. But when two little girls go missing, he's the first in line to bring them home-even if that means scouring the wilderness with the woman he once loved and lost, Artemis Rey.

Artemis has never stopped wanting Derek. Now, racing to find the girls before it's too late, minutes turn to hours. Night falls. Old flames rekindle. And a danger grows in the darkest wilderness that may be more than even the Search and Rescue brotherhood can hope to face...

I picked up this novella on a whim, not only because it was free, but also because I've always wanted to try some of Katie Ruggle's books. I've heard great things about all of her series, and I tend to enjoy romantic suspense but always want to read more. I think I'm going to start this series! This novella was a perfect step into the series, and I'm ready for more.

Note that I'm completely new to the series, I haven't read anything else and I don't know anything about any of the characters. So Derek and Artemis are the first hero/heroine pairing that I'm aware of, but I see the "next" pairing based off this novella. Which is cool!

Derek is an ice rescue diver, and one of the best at the job. He's fearless and he has good instincts - which is exactly what is needed, when a young boy falls into the ice, during a school field trip. To make matters worse, two young girls go missing in the nearby forest. He'll have to search the forest with the students' teacher, none other than a childhood friend and ex-girlfriend, Artemis Rey. Derek never wanted to break up with Artemis, but after a life-changing event occurred when they were in their teens, he did what needed to be done. Years later, it's clear that neither of them got over the other, and both of them still have feelings for each other. What better way to figure things out than during a search and rescue mission?

This is a novella so it was a short, compact story, but I enjoyed it nonetheless. It's nothing short of romantic suspense, with both the romance aspect, and the suspense aspect. I wasn't expecting a ton of "suspense", but Ruggle did a great job with bringing that into the story. There is an arsonist in town, and this plot is hinted at in this novella, but perhaps more fully explored in the first full-length novel of the series. This was really well-written!

I adored Derek, with his easy charm and goofy, carefree nature. He seems like a big lovable guy with lethal charm and a killer smile, but he is also very brave, smart, and he never hesitates to act first. He's a good guy - heck, even his reasons for breaking up with Artemis are good. He has a noble, selfless soul, and that makes him really good at his job.

Artemis is also another selfless soul; she's a kind schoolteacher who would do anything for her students. Years ago, Derek broke up with her, and it took some time to move on. Years later, she realizes that she never got over him, and she never wants to get over him. They're a great match, with her gentle kindness, and his goofy charm.

The romance is cute! I usually don't go for second-chance romances because of all the angst and hurt that is usually associated with them. But this one did not have as much of all that! I mean, it was there in the past, but not in the novella itself. And also, Derek and Artemis talk about things while they're searching and rescuing, and the open communication does a lot of good. I love seeing open communication in romance novels - usually a lot of drama could be avoided if the hero/heroine just talked about things.

There was a side of steamy too! While this novella was short (as expected), there were one or two steamy scenes between Derek and Artemis. Their chemistry is undeniable, even after years.

There is a happy ending for Derek and Artemis, and a happy ending for the missing children! But like I said, there is the "suspense" side of things that is hinted at throughout the novella, that will most likely be the focus of the first full-length of the series. Which probably features Callum and Lou. I'm excited! I have that book and hope to read it soon.

Nothing specific comes to mind! My foray into the series is going well so far.

If you like romantic suspense, I hear Katie Ruggle's books are a good place to start! Hence what I'm doing. I'm not an expect in romantic suspense but I know other romance bloggers who are, and I trust their opinions.

4 stars. I liked this novella - it serves a good purpose in introducing readers to the series - and I'm interested in reading more by this author, whether in this series (preferably, at this point) or one of her other series. Search & Rescue is really cool, just saying!