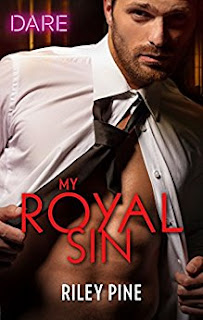 She’s totally off-limits…
…which makes her even more irresistible!

Famed for his iron control, Prince Benedict is unprepared for the chemistry that ricochets through him when he meets Ruby. She is temptation personified…but couldn’t be more inappropriate for a royal fling! Except after years of choosing duty over desire, his control has finally snapped—he’s choosing pleasure, of the most X-rated kind. After all, if he’s going to indulge in the forbidden, the higher the stakes, the greater the thrill!

I read My Royal Temptation a few months ago and really enjoyed it. I didn't know the book would be part of a series, so I was really surprised and very pleased to find out about My Royal Sin and My Royal Hook-Up. While I didn't totally dislike this new book, I think my expectations had been a little too high, and I felt a little disappointed. Still, it was a fairly decent companion sequel.

Benedict is the second son of the king, the spare heir, the one destined for priesthood. There are only  a few weeks before he takes his vows and becomes a priest. But no one knows what goes on in Benedict's head - like how fascinated he is by desire and pleasure, and how much he wishes he could give in to temptation. It only gets harder to resist when a mysterious woman named Ruby shows up to seduce. Ruby - Evangeline - was set to seduce Prince Benedict and find a painting he owns. She doesn't expect him to be quite so tempting himself - or for her to fall in love with him.

It was an interesting struggle, with a priest-bound hero and a seductress heroine. Two opposites, both struggling with their lives. Evangeline isn't an escort - she's a struggling artist trying to provide for her sister-in-law and niece while her brother is in prison. She is given a job to seduce Prince Benedict, and she takes the job because she needs the money. Evangeline has never done anything of the sort, but she's desperate, and she'll do anything for her family.

Benedict has always struggled with his desires. He is determined to see his duty through, but he has always wanted to experience a great manner of things with a woman. And when Evangeline shows up, he knows she has an ulterior motive, but he doesn't want to resist her. Benedict is a good guy. I felt for him, and I understood his willpower in trying to fulfill his duty.

These two are a good pair. They learn to trust each other quickly, and they fall for each other. They are very compatible in other ways - the chemistry is there from the start.

I like that there is something more than the romance going on in this book. It's not something you'd expect, so I won't go into details, but think secret societies and hidden treasures. Definitely makes the story even more interesting.

There is a happy ending! I always love those.

I think my expectations were a little too high, in terms of the sexy times. I soooo expect more sex, and the sex to be more x-rated (as implied by the synopsis). A virgin priest with a dirty mind and a novice seductress? That should have made for a combustible pair. And believe me, Benedict was ready for some dirty action. He is well-read in terms of pleasure and Evangeline is perfect for him. But I found the sexy times lacking - there weren't enough scenes, and the few that were there weren't particular hot - like, not more so. It was a little disappointing! This is supposed to be Harlequin's hottest line yet, AND here we have a priest with a filthy mind - come on! I expected more.

I recommend book one, and honestly this one isn't too bad so I'd recommend this one too. I think my own expectations had been high, so I felt a little let down, but if you don't have expectations for this book, then you won't be disappointed. It's hot, just not as hot as I was expecting. And the romance is also kind of sweet. This is a short, quick read, so there's low commitment!

3 stars. Despite this slightly low rating, I did enjoy the book, and I am looking forward to reading the next one. I love the idea behind this series and I'm so curious to see what kind of man the hero of the next book is.