Review: Beauty and the Barbarian by Amy Jarecki 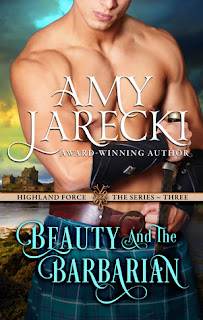 Born with the mark of the devil, Merrin has been hidden on the islet of Eilean Fladda for near twenty years. When the body of a Highlander washes ashore, the innocent lass presumes him dead. Brushing the hair from the rugged warrior’s face, her fingers connect with warm flesh. Warm.

Ian MacLeod wakes to a woman so radiant, he believes her an angel. But when the lass recoils from him, he fears she knows of his evil deeds. While he heals, Ian is stunned when he exposes her witch’s mark, yet he’s spellbound by Merrin’s allure. He’d do anything to erase his haunting past and earn her love.

But there’s a henchman after Ian’s head, and when that man learns the Highlander is still alive, the couple is forced to flee Merrin’s sheltered world. Fighting for survival, destiny demands they each face their demons, but doing so may forever ruin them both.

Here I go with another backlist read! This book was recently recommended to me by a dear blogging pal, Renee (Addicted to Romance), who is the queen of romance reading and knows just about everything there is to know about romance novels. I had asked her for romance recommendations involving the healer maiden/knight trope, and she delivered! She listed four or five different titles - this being one of them. I recognized Jarecki's name from her books with Forever Romance, but I'd not read anything by her. This book is $3.99 on Amazon (the Kindle version) and it came recommended by a friend, so I decided to give it a chance. I'm glad I did!

Ian MacLeod, second son of Laird Calum MacLeod and Lady Anne, didn't intend to get shot in the back and wash up on the shores of Fladda. He spirited away his uncle's young wife, after discovering that his uncle beat her. Janet is safe with her kinsmen, but Ian is injured, and at large. It is luck that he washes up on the shores of the home of a healer and his daughter. Merrin and her father live in an isolated cottage, because many fear that Merrin is a witch (due to an unusual birthmark on her neck). Niall (Merrin's father) is a skilled healer, and Merrin is quite good as well. They take in Ian without knowing who he is, though they suspect he is a well-bred Highlander. Unfortunately for all three of them, Ian's uncle won't stop hunting Ian until he knows that Ian is dead. Ian, Merrin, and Niall are forced to flee for their lives. Merrin has never known life outside Fladda, but now she must give up everything to stay alive.

I would first like to take a moment to appreciate the cover and all of the fineness that is Ian MacLeod (well, his model, anyway). I loooove how the model doesn't have facial hair, because that's so true to the character - Ian hates facial hair! It's hilarious. I'm not usually a fan of completely clean-shaven looks, but I think it's fantastic that the cover has that small part of the character represented. So much smoothness on that cover!

Ian the man is such a wonderful hero. He is clearly very selfless and brave, having given no thought but to rescue a woman who is being abused, even if the woman is his uncle's wife. He protects Merrin and Niall with all his strength, which isn't much, given his musket gunshot wound. Ian is loyal, upstanding, chivalrous, and caring - everything a knight should be. He's a good man with a good heart - not to mention charming and swoon-worthy as well. I swooned a lot!

Merrin is timid at first, given her sheltered lifestyle. She has lived in isolation and fear, expecting everyone to want to kill her because of her birthmark. But Merrin is sweet and kind and gentle, with all the qualities of a good healer. She is soft where Ian is hard, kind where he is fierce, caring where he is stubborn. She develops her will as the journey goes on. Her selflessness shines throughout the story, even among those that want her dead.

As a couple, Ian and Merrin are both smoldering and sweet. They have amazing chemistry from the start, and they also get along well. Jarecki builds the chemistry slow at first, and then it's an inferno. I liked this progression! Things get heated between Ian and Merrin, and there are a number of sexy times in this book. Jarecki knows how to cook up good tension and chemistry.

And of course I was really satisfied with the healer/knight trope. Merrin is a gentle maiden and a good healer, and Ian is an alpha knight who isn't an alpha-hole, but is brawny, cunning, skilled, and also charming. They are foils, and they balance well. The trope was executed perfectly!

The story is exciting from start to finish! The kind of exciting that has you biting your nails and sitting at the edge of your seat. Ian, Merrin, and Niall are fleeing for their lives for most of the book, with almost nowhere to go. There is a desperate undertone to the book - will they make it? Will Ian turn himself over in order to save Merrin and Niall? Will Ian's brother grant them sanctuary? There were many pieces in play, and nothing was guaranteed.

The ending was a very good one, with a nice happily-ever-after. I loved reading Ian and Merrin's journey, and was happy that they finally got to sit and rest, at bare minimum. The story is lovely and the HEA is fitting. Though I wouldn't mind an epilogue or check-in of some sort!

The only complaint I had (and it's a minor one) is the amount of crying in this book. Gosh, Merrin cried a lot! Now, it's not like she cried in every scene - that would have been crazy. I'd say a character could cry made two or three times in the book, and that's not too much. But Merrin cried maybe four or five times? I think it's her personality/character - she gets sad or frustrated and that's her immediate reaction. But I wanted to shake her a little! Get a grip, lady! It wasn't so bad though. Some of the crying was death-related (but then some of it was like, jealousy-related.).

I loved this Highlander romance, and I would definitely loved the gentle healer/tough knight trope. That trope is one of my "guilty" pleasures, and it worked well in this story. I've not read anything else in this series or by this author, but I highly recommend this book. It's the third book in the series but all of the books are companion novels. I imagine the first two books will feature characters I've seen in books one and two. Perhaps I will give those two a shot as well!

5 stars. I loved this book so much! I am already planning to reread it. I've been in a bit of a reading slump, and I picked this one up on a whim. I'm glad I did because I really enjoyed it. I will definitely return to this series, but for now, I will hunt down some of Renee's other recommendations that feature a gentle healer and an alpha knight!