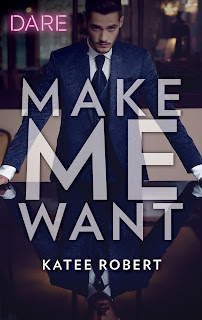 Lucy Baudin’s ex did a number on her self-esteem, but it’s time for her to regain control. In her job as a lawyer she’s bold, confident. But in the bedroom she needs inspiration to reawaken her inner seductress. Asking her friend Gideon Novak for help seems wrong…yet so deliciously right!

I don't know why I put off reading this book for so long! It was published nearly a month ago, and I kept pushing it off for some reason. Katee Robert is one of those romance authors that never seems to disappoint me, and I was definitely not disappointed by Make Me Want. This book was one of Robert's hottest books to date, and also one of the strongest, emotionally speaking.

Lucy Baudin and her ex-fiance split two years ago, and nothing has been the same since. Two years later, she is hoping to get a position at work, but her boss is very traditional and wants to see her married before promoting her. So she enlists her friend Gideon to help - he's a headhunter, and one of the best in the business. But she also wants his help in another way - she wants to have better sexual experience before going into her modern marriage of convenience. Gideon has always been a player and his reputation in the bedroom is legendary. But when it comes to Lucy, Gideon doesn't mess around. He has had feelings for her since he saw her at a bar six years ago - but his friend Jeff beat him, and Gideon would never break the bro code. Finding a husband for Lucy and giving her sex lessons? Shouldn't be too hard... right?

I don't love the "best-friend's-girl" trope - in which the hero is in love with the girl, but she's dating his best friend, boo hoo. BUT. I didn't hate it in this book! Dare I say, I actually think the trope worked here. Jeff cheated on Lucy and Gideon found out, and told her, though he waited a month to do so (for good reason - don't demonize him). When Jeff and Lucy split, Gideon and Lucy stopped being friends... and the whole time Jeff and Lucy were together, Gideon never made a move or a pass, he was always a gentleman (in the friend zone). So there was no cheating (Gideon and Lucy never messed around while she was with Jeff), and the story starts with Jeff and Lucy already having split up. This worked for me.

Gideon has always felt guilty for not telling Lucy sooner, about Jeff cheating on her. When she comes to him wanting a few favors, he agrees, partially because of the guilt he still feels. He always had feelings for Lucy, but never said anything, never tried anything. Gideon is so selfless in this book, and sometimes it got frustrating. He never voiced what he wanted, he always made everything about Lucy - which was good because it was all about Lucy and her crazy plan. I wanted him to speak up about what he wanted though, because he was setting himself up to get hurt in the process of achieving Lucy's plan.

But one thing I liked about this book was that Lucy started to realize that Gideon never vocalized what he wanted, he never made demands or lost control or anything like that. He always made everything center around her, which was good... until she realized that she wanted him as more than a friend, but she didn't know what he wanted. I liked that she realized that what he wanted mattered a whole lot, not just what she wanted. It's great to be assertive; but it's also great to listen to what your partner wants.

And that's something I think romance writers get wrong sometimes; the heroine can be brash and loud and outspoken, and demanding in the bedroom. That's cool. But she should also be listening to her partner too. It's not just about her and what she wants. It's good to vocalize what she wants. It's bad to never ask what her partner wants or never listen or pick up on the fact that he doesn't vocalize.

Anyway, Robert addressed this, which was good. I would have thrown the PROBLEMATIC flag all over this book, had she not. Healthy relationships are balanced, not one-sided to hear the woman roar (or whatever). I'm a feminist saying all of this. Don't be selfish. Don't be a silent accommodating doormat, but don't ignore your partner and put your needs/wants first all the time.

The sexy times were super super hot in this book. I feel like this might be one of Robert's hottest books, if not the hottest. There were sooooo many sexy times, for such a short book. I mean, it wasn't all sex, but I expected maybe three? There were more than three. And all of them were different, unique, and super steamy.

The ending has both characters turning around, realizing their mistakes, and realizing the other person's side of things. Gideon does some groveling, but Lucy also has to do some soul-searching, and she realized she was a coward as much as he was being a martyr. I liked this. It wasn't her being high and mighty, you-need-to-apologize-for-everything-because-I'm-not-wrong-in-this-situation. There was a mutual "I-messed-up-please-forgive-me".

All in all, I enjoyed this book. I had a great time reading it. I liked the tropes, I loved the steamy times, and I adored the ending.

I wanted to see Gideon lose a little of his tightly leashed control. He did in like, one scene? I know this book was more about Lucy, but still. Gideon is a living, breathing man - and a main character, at that. It should have been as much his story as it was hers.

I always tend to recommend Robert's books because they're super hot, addicting, and quick reads. This book is not exception. If you like steamy contemporary romances novels, this book (and any of her books) is a good one for you. It's somewhat short (though not too short) and there is a HEA!

4 stars. I'm a little sorry I waited so long to read this book! I'm not sure what held me back. This sexy book should be on every romance reader's TBR! And book two - I can't wait to read Roman's story!