Review: A Taxonomy of Love by Rachael Allen 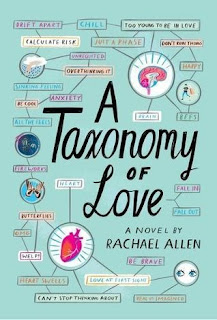 The moment Spencer meets Hope the summer before seventh grade, it’s . . . something at first sight. He knows she’s special, possibly even magical. The pair become fast friends, climbing trees and planning world travels. After years of being outshone by his older brother and teased because of his Tourette syndrome, Spencer finally feels like he belongs. But as Hope and Spencer get older and life gets messier, the clear label of “friend” gets messier, too.

Through sibling feuds and family tragedies, new relationships and broken hearts, the two grow together and apart, and Spencer, an aspiring scientist, tries to map it all out using his trusty system of taxonomy. He wants to identify and classify their relationship, but in the end, he finds that life doesn’t always fit into easy-to-manage boxes, and it’s this messy complexity that makes life so rich and beautiful.

I'd heard great things about this book, and while I'm not a YA contemporary fan (definitely not a tough-issue contemporary person), I was curious enough to want to know more about it. This book broke my heart in many ways, but it was really and truly inspiring and hopeful. It wasn't an easy read but it was a meaningful one, and I'm glad I took a chance on it.

This book begins when Spencer is 13 years old, and his new neighbors are moving in. That is when he meets Hope. He likes Hope immediately; she is nice, fun, and she doesn't think he is a weirdo because of his Tourette Syndrome tics and sniffs. But his older brother Dean also thinks Hope is cool. As the years go on, Spencer and Hope are friends... Dean and Hope are a couple... and then they're not... Spencer and Jayla are a couple... Hope and Mikey are a couple... and so life goes. This book is a story of broken hearts and painful sibling relationships, or loss and life, and misunderstandings and lost time. It ends with Spencer being 19 years old, and thus closes the story after six years.

Most of the story is narrated by Spencer, though occasional chapters are letters from Hope to her older sister Janie, who travels to third-world countries to do humanitarian work (if I remember correctly). Spencer is a different kind of male protagonist, primarily because he has Tourette Syndrome (and you don't find a lot of YA books featuring characters with Tourette Syndrome - definitely not them being protagonists). Spencer is an intelligent, clever, logical kid who has his quirks and eccentricities but really is a good kid. He has the worst luck, falling for his best friend. His best friend Hope, who ends up dating his big brother Dean.

I have to say, I didn't always like Hope. She didn't seem to think things through, and she definitely wasn't a big fan of communication, from what I could see from her side of her friendship with Spencer. I didn't think she was good for Spencer at all, whether as a friend, or what he wanted (her as his girlfriend). I began to like her more as the story went on, but I was totally rooting for Spencer to not end up with her.

You can imagine how messy this book is. Messy isn't always bad because life really is messy. Relationships are messy. Nothing is ever black-and-white, like we'd hope. The relationships in this book are very muddled. Spencer has been in love with Hope for forever. Hope has been interested in Spencer for forever but... she gets with Dean for stupid reasons. And then she gets with Mikey after a bad breakup with Dean. Spencer starts dating a girl named Jayla, and I shipped them so hard. I was so hoping they would be endgame. But like I said... messy.

I personally thought the author did a great job with Tourette Syndrome representation. I knew a few students in primary and secondary school that had Tourette, but I don't really know much of the specifics of the syndrome. To me it seemed like Allen did her research and really understand the depth of the syndrome and how it affected life for the character, and the surrounding characters.

And of course, the taxonomy illustrations at the beginning of each chapter (most chapters, anyway) were really cool. They definitely tied everything together! I would occasionally skip one (because I was engrossed in the story) but I always came back to read that taxonomy that I skipped because they were interesting, and mostly foreshadowed that chapter's events.

This story was really hard to read, because it's heartbreaking (especially in terms of Spencer/Hope, but also for other reasons). But I'm glad I gave it a chance. It's worth the read and makes you think about things like relationships, and loss.

My personal opinion: I thought Hope was kind of a toxic character, especially for Spencer. She seemed to be a negative influence in his life and didn't act like much of a friend. She started dating Dean and I thought that should have been the end of her and Spencer's friendship. Spencer didn't take it well (Hope and Dean dating), and I think he should have cut the friendship at that point. Hope was not a very supportive friend and didn't do a good job of being Spencer's friend. I hated when she walled herself off from Spencer and how much time they wasted not talking to each other, because of Hope's hardheadedness. Anyway, even if Spencer hadn't had feelings for Hope, I still would have wanted him to distance himself from her. She was toxic for so many reasons, before and after the big loss in her family.


3 stars. I am glad I gave this book a chance. It made me think and reflect on my own relationships, past and present. But it wasn't a book that I loved or totally enjoyed. This type of contemporary really isn't for me but I'd hoped that I would like it. But I think it wasn't for me!