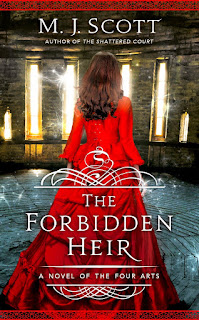 She fled to save her life, but surviving what comes next might destroy everything she believes in…

The royal witches of Anglion have always been bound to serve their country. But Lady Sophia Mackenzie, whose unbound magic and near claim to the crown made her a target, was forced to flee Anglion, leaving behind a dead assassin and shattered loyalties. Now she finds herself in Illvya, where the magic is everything she’s been taught to fear and the only person she can trust is her new husband, Cameron.

Sophia and Cameron must navigate a strange world of illicit temptations, dangerous threats and political intrigue, where as a royal witch Sophia is both prized and reviled.

As she begins to master her powers, the factions seeking to control Sophia close in, and her magical and emotional bonds with Cameron are pushed to the limit. To survive long enough to claim the future she seeks, she may have to choose between love and loyalty, and hope the price of her choice is one she can bear.

The Shattered Court was one of my favorite adult books back in Spring 2015. To this day, I've reread it so many times, I could probably quote the book. I'm a huge fan of adult fantasy romance and the book really clicked for me. The Forbidden Heir has been a long time coming and I found that I wasn't disappointed at all. While I loved The Shattered Court more, I was completely hooked on this sequel and I'm dying for more.

The Forbidden Heir picks up pretty much exactly where The Shattered Court left off, with Cameron and Sophie fleeing Anglion and seeking asylum in Illyva. They are granted asylum but they trust no one, especially since the Illyvan customs on magic are strange to them. Cameron and Sophie must be on guard at the Illyvan magic school and at court, where there enemies are both familiar and unfamiliar. To protect themselves, they must make choices that could put everything they worked for at risk.

Much of this novel takes place in the Academe, where Cameron and Sophie are granted asylum under strained circumstances. They decide to train at the Academe and take classes to strengthen their skills, while they are lying low. But tensions are very high, especially when an envoy from Anglion arrives, demanding that Cameron and Sophie return. Sophie is a valuable commodity to Anglion, and not just as an heir to the throne.

This story was packed with action, political intrigue, scheming, and high stakes. There was a different feel to this book, compared to the first book. In the first book, everything felt confined to Anglion and Cameron/Sophie's bond. But this book takes the story to bigger, broader heights. More important figures come into play, like the emperor, who has taken an interest in the young couple.

This book is told in both Cameron and Sophie's third-person POV, which I'm always a fan of. Dual POV in romance novels really works, and the author does a great job with both. I also love third person narratives and this was well-written as well.

Cameron was a favorite of mine in the first book and he remains a favorite. I love how protective and fearless he is when it comes to Sophie. Alpha males get a lot of crap for being too macho and manly and whatnot, but on Cameron, the alpha male archetype works. He never tries to control or subdue Sophie, but he is so committed to her as a husband and protector. I love his loyalty and his strength, and his clever mind. He is the smarter and more careful of the two, but that's not to say that he doesn't make mistakes.

Sophie is more impulsive and less experienced in certain aspects of court, but she is also very intelligent and a fast learner. She is just as brave as her husband and she has a backbone and a will and she is never afraid to speak her mind. Sophie is a strong female protagonist and I have never not liked her so far.

As a couple, Cameron and Sophie really fit together. Cameron is strong and steady and always there to catch Sophie, and Sophie is impulsive and headstrong and so caring. They balance each other with their strengths and weaknesses, and they lean on each other as any healthy couple might. I loved seeing their relationship grow in this book because they became even stronger as a couple, which made them stronger characters. They have many obstacles and trials to overcome, among themselves as well as involving outside threats, and I think as a newly married couple they worked through things well.

Not to mention that the romance is pretty steamy. Cameron and Sophie have great chemistry and this chemistry doesn't let up just because they're married, or on the run.

The conflict of the book boils down to the Anglion queen demanding that Cameron and Sophie return... as well as the Anglion line of heirs growing shorter (with Sophie being next)... and of course the emperor has his say in whether or not Cameron and Sophie can leave. Throw in some demons that won't leave Cameron and Sophie alone, and they've got big problems. The ending of the book is not quite a cliffhanger but it ends with some serious problems in the horizon, and I'm definitely looking out for more. I can't wait to see what trouble these two get up to next!

The ending is a bit shocking and made me a little disappointed (in terms of one of Sophie's decisions). I think a bit more communication with Cameron would have been nice, but in the end, I think what happened was probably inevitable. The ending sets up well for a third book so I'm not mad about it, but it was the type of ending that left me on edge.

4 stars. I'm excited for The Unbound Queen, whenever it will be published! The title alone makes one think... I bet it will be an exciting third book. I'm definitely going to reread books one and two in the meantime! Give this series a shot if you love fantasy, romance, and an action-packed story.