Review: Bound to You by Alyssa Brandon 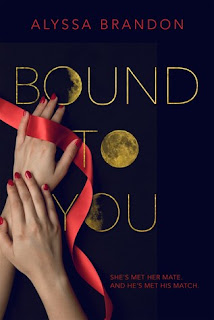 A teen werewolf finally meets her destined soulmate only to discover that he's not quite what she expected in this steamy debut romance.

Megan Ross has been waiting her whole life for her mate to come and sweep her off her feet. But the wolf she meets on the beach is NOT the sweet gentle boy she's been dreaming of. Instead, he's a warrior, one whose suffering has led him to lock his heart away in a prison as cold and hard as a diamond, who fights to resist the bond and their deep sexual attraction.

Far from home, with a soulmate who is still a stranger, Megan learns that the path to true love isn't quite as straight and easy as she thought . . .

Typically I don't read review books four months in advance, because I always want to put out a review within one or two days - and typically publishers want to see reviews a month before publication. But I couldn't wait, with this book. I received it unsolicited from the publisher and I hadn't known much about it before picking it up. For some reason, I wanted to read a paranormal romance novel, and I dug this one out on a whim. It was a great decision because I ended up loving this book!

This novel is set in modern times but with a twist - werewolves exist! Megan is an alpha werewolf who is trying to find her alpha mate. She has been looking for two years but to no avail. On her eighteenth birthday, at her party where all of the eligible werewolves in the area were invited, she meets her mate - James. But James is none too thrilled to finally have a wait. He is a warrior wolf, different from Megan and her father/her father's clan, and he lives far away near Quebec. Megan has always wanted a mate, and she has always wanted someone to love her like no one else exists. But James isn't the Prince Charming she was expecting. She is far from home and living with a stranger - can she find love? Or is she destined to be mated but never loved?

I never used to be a fan of werewolf paranormal fiction but maybe it has been so long since I read one. I found this one to be wonderful! There are werewolf customs and traditions and rules that are included in the story, and the werewolf world and setup made sense to me. I had no problems with this werewolf story (in terms of the werewolf aspect)!

A disclaimer of a sort: this book is 100% paranormal romance, emphasis on the romance bit. If you don't want to read a story heavily focused on romance, pass on this one! I love PNR and I was in love with how much romance there was in this book (i.e. how much of the story was focused primarily on the romance). One of the complaints I always have with Swoon Reads books is that they are never actually swoony - but this book certainly is!

I get ahead of myself though; I'll talk about the romance in a few paragraphs. I always start with the characters. I adored Megan; she is sweet and kind, and a little naive, but she grows into her strength and stubbornness. She is an alpha but not an aggressive or violent one, though she forges her own path and sticks to her ground. I personally loved that she knew exactly what she wanted (a mate - someone to love her). Some might say that this is backwards and/or old-fashioned, but I thought this was lovely. She clearly knew what was best for her and had good reason to make the decisions that she did, regarding leaving home and going with James. It wasn't just tradition for her.

I also really liked James. He came across as a rude, cold jerk, but it was obvious from the start that he had baggage and was putting on a front. I'm not excusing his cold behavior but it was something that, for me, intrigued me and made me want to puzzle him out. He is a good guy, with a selfless and noble streak, and he was always a gentleman with Megan. He just wasn't always the nicest guy. But I loved his dominant, protective personality against her sweet and stubborn personality.

The romance! I loved the romance. It's a hate-to-love, enemies-to-lovers, "arranged marriage" type of romance. Personally? I love these two tropes. It's not technically an arranged marriage since they didn't get married, but they are fated mates and they secured the bond in several different ways as the story went on, so you know what I mean. I loved the tropes of the romance. I also loved the slow-burn, sexy chemistry of the romance. James and Megan were throwing off some serious heat! They both really wanted each other, but were holding back for personal reasons. But that led to a lot of push and pull, and a lot of "almost" scenes. The chemistry was super hot!

And when there were finally some physical chemistry manifesting on the page... let me just say that this has to be the swooniest and steamiest Swoon Reads book I've read yet. I'm NOT saying this is an R rated book! The author has written everything in such a way that things are vague! But everything that can be inferred by what isn't written is some steamy stuff. Take my word for it!

No love triangle! I promise there is no love triangle or square or harboring feelings or weirdness with the best friends or anything of the sort. No external drama of any sort. As soon as James and Megan meet (which is within the first few pages), it's over for them - meaning, there is no chance of anyone else walking into the picture. They have a lot of chemistry, and a lot of curiosity for each other. And their bond is strong from the start, even with their hate-to-love relationship happening.

The story isn't just a romance, though the romance is huge. There are other conflicts, like Megan adjusting to life far away from home, and conflicts with wraiths attacking werewolves. I won't give too much away but I will say that I liked the other subplots that weren't primarily about the romance. I was never bored while reading this book - in fact, I practically flew through this book!

The ending is very satisfying! I wouldn't mind an epilogue or a check-in of some sort in the future, but I was really happy with the ending. It seems like this is a standalone novel which works for me!

I don't have anything specific that comes to mind! Maybe a little bit more with Lucy and her future, and a broader resolution to the wraith conflict, but honestly I wasn't too bothered by these things!

If you like YA paranormal romance, definitely give this book a chance. You might be like me and not really into werewolf books; but trust me, this book was fantastic. The romance is so steamy and swoony and you will fall in love with James and Megan falling in love! This book is steamy but definitely still teen-appropriate.

5 stars. I rarely give out this rating but this book made me so happy and I had so few complaints. Everything about this book worked for me - characters/character development, romance, chemistry, story, secondary characters, writing. I wouldn't mind seeing a companion novel in the horizon! Even a direct sequel wouldn't be bad, but I kind of like this book as a standalone, as it is. In any case, I really enjoyed this book and will definitely be rereading it!