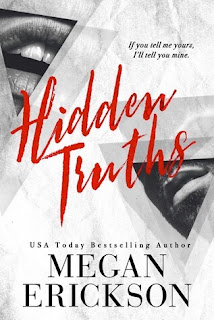 I meet him in the bar of a town where people run to get away from their past. That's why I'm here. His dark eyes promise a good time, and I take him up on it. Maybe I'm weak, or maybe I'm just lonely. Except it isn't only one night, because with one touch, we're addicted.

We're both in town for a different purpose. I want to save a life, and he wants to end one. The truth won't set us free--it will destroy us. Unless he keeps his promise, and I give up mine.

HIDDEN TRUTHS is a standalone romance that was originally published as a newsletter serial. It has since been revised and expanded. Enjoy the ride!

Hidden Truths was originally a standalone newsletter serial, in which the author released one chapter every Friday, via her newsletter. I was hooked from the start and dying for more every Friday! In all honesty, this might sound dramatic but anticipating each chapter got me through some tough work weeks, believe it or not. I kept up with chapters 1-12, but then got crazy busy with work and missed chapters 13-15 and the epilogue. But as of last night, I am all caught up, so here is my review!

This is a story about a woman named Tara and a man named Lance, who meet under coincidental circumstances but are more connected than they think. How? You'll have to read the book to find out. (No, they aren't blood-related or anything creepy like that.) Lance and Tara can't stay away from each other, but their budding relationship might not be up to them. With Tara's past and Lance's thirst for revenge, they may not have had a chance from the start.

There is something simply addicting about Erickson's stories, but especially this one! It's suspense/thriller and every chapter had me captivated and ready for more. Releasing a chapter at a time was clever because the author always ended each chapter on a bit of a cliffhanger... basically ensuring that I (and many other eager readers) would be back for more. I'm not mad about it! Now that the book is available in a singular form, it would be a different reading experience, but I liked the newsletter serial (even if I did want to scream after some chapters' endings).

Lance is so complex and deep, and I loved the guy. He is complicated, with a complicated past and a complicated future (what he wants for his future, anyway). He is a good person despite his past, and he has a strong set of morals (despite his past). I liked his quiet brooding nature, and how straightforward he was. He and Tara got along well, with both of them being so direct and open.

The pair has some serious chemistry! There was sexual tension from the moment they saw each other, and that tension did not go away even long after the first sexy times. Erickson is really good at cooking up chemistry and keeping the tension going, and she always writes some good sexy times.

She also writes really good romance in general - meaning the emotional side of things. Lance and Tara have great chemistry but they also click and begin to like each other more than physically. They start to trust each other and that trust becomes unbreakable as the story goes on. Both of them had reason to stop trusting and liking the other, but they both kept level heads and didn't jump 90 miles to some ridiculous conclusions. I loved how well they communicated with each other, even when they were so angry at and/or upset with the other.

I don't want to give away the twists and turns so I won't say much about the story outside of the romance. It has to do with Tara's past including her brother and his shady dealings, and Lance's past as well as his own brother. The thriller/suspense part of the story gets super intense and you'll be wanting to scream at the author as that part of the story unfolds. But hang in there!

The climax of the story is intense but the ending is very satisfying! It's not a perfect rainbows-and-sunshine ending but it is a HEA and I loved it. Erickson always leaves readers happy no matter how intense the story gets, which is great. I loved the ending, and I'm glad this book is a standalone. But I'm excited for the next book (which features Tara's brother!).

If you like romantic suspense/thrillers, this is one for you! It's longer than a novella but shorter than a full-length novel, but the story is very complete and well-written. It's a standalone but there will be a companion sequel that will follow Tara's brother Bryan. I find Erickson's romance novels very addicting, so prepare to be sucked into the story if you give it a chance!

4 stars. This book was sexy, romantic, intense, nail-biting, and in the end, very satisfying. I was hooked and I never wanted to stop reading. This is a story worthy of rereading many times over, because it's that addicting. Do yourself a favor and check it out!