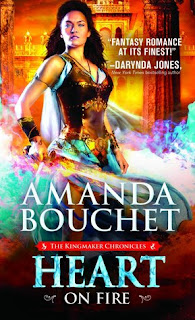 Who is Catalia Fisa?

With the help of pivotal figures from her past, Cat begins to understand the root of her exceptional magic, her fated union with Griffin Sinta, and Griffin's role in shaping her destiny.

Only Cat holds the key to unlocking her own power, and that means finally accepting herself, her past, and her future in order to protect her loved ones, confront her murderous mother, and taking a final, terrifying step--reuniting all three realms and taking her place as the Queen of Thalyria.

What doesn't kill her will only make her stronger...we hope.

Heart on Fire was not a fun ride for me. It wasn't all bad, but it definitely wasn't all good. I found myself more annoyed with the book than anything else, despite enjoying parts here and there. The book felt lackluster compared to the previous two books - in fact, I think it's safe to say that the series went straight downhill after book one. Book two was good but not as good as book one... book three lacked a lot of quality.

In this sequel novel, Cat and Griffin must defeat Cat's mother once and for all. But to do so, Cat must reach into her powers and control them, which she has yet to do. The kingdom of Thalyria is in her hands. If she can't find control, everything falls.

Things I liked... I enjoyed the romance. Griffin and Cat are a strong, solid pair, and this book proves that they are good for each other and good together. There are moments when Cat is afraid of how much the Gods interfered with their lives to direct their fates, but nothing ever comes between Griffin and Cat. I love how devoted they are to each other - it's absolutely not one-sided, not by far. Their trust and respect for each other really grows and strengthens in this book.

I adore Griffin, though he seemed to be a little one-dimensional in this book (i.e. only obsessed with Cat's safety and well-being). On the one hand, this is great theoretically... on the other hand, the man should have other priorities and interests. I love Griffin, with his strength, loyalty, and warrior/warlord overprotective, dominating nature, but I wish he had more to him besides being up Cat's a**. Boys today have hobbies like video games and sports. Griffin needs hobbies. I still love him. He's my favorite character of the series. But. One-dimensional.

The pacing of the story is good - I never got bored and I rolled right along to the end. I didn't necessarily like the story but I had no trouble getting through the book. So that's a plus! The author's writing has improved with each other. (I can't say the same about other things).

Cat is something I will talk about in the next section. I couldn't stand her. However, I will say that I'm glad she finally realized her potential and got over herself (girlfriend has been moping and wallowing for the entire series).

Hmmm, I thought there was more that I liked. I'll have to reconsider my rating. I didn't even really like the ending!

I could not staaaand Cat. I understand that the author was trying to portray her as feminist and strong and kickbutt and blah blah blah but Cat came across as very self-centered and self-involved in this book. Everything was about her, especially with the amount of wallowing and self-pitying she was doing. Throw in the fact that she is suuuuuper special on all fronts and we have a girl with a massive ego! Take it down a notch, sweetie! I don't like it when male protagonists have huge egos. I like it just as little when female protagonists have huge egos.

And on that note -- why is it that Cat has every single special power conceivable? She has the powers of the Gods, just because? How is it that she is so magical and powerful and a special snowflake? I didn't understand this - it seemed like a lot of deus ex machina. Cat had absolutely no flaws when it came to her abilities - abilities kept manifesting and manifesting and again, it seemed to be a lot of deus ex machina. I wasn't buying the whole "hard to kill" thing. I wasn't buying the "child of the Gods" thing. It seemed like a lot of luck and a free-for-all when it came to Cat claiming abilities left and right.

Back on the whole egoistical thing - please explain to me why Griffin was so wholly and utterly obsessed with Cat and only Cat. The man lived and breathed for her - I don't understand why? It was beyond obsession - I mean, he was literally created for her therefore he is her puppet? Like I said in the previous section, men tend to have hobbies... why is Griffin only focused on Cat? Isn't he the one conquering realms, leading his (royal) family, etc.? He seemed so one-dimensional because his priority was only Cat, and that to me is FAKE. Not sexy.

Seguing into my next complaint - WHY is Cat the queen of Thalyria and HOW is she such. I don't understand. She literally does N O T H I N G for Thalyria (other than face her mother three times in the book and hesitating every single time and letting her mother the evil witch escape every time). Everyone else fights for Thalyria, dies for Thalyria, goes to the ends of the earth for Thalyria, but Cat... Cat lets everyone do the work for her. Instead, she drags Griffin on some merry quest to find a magic potion that will magic help her control her powers... meanwhile her powers are utter crap and when they find the potion, it doesn't work (you'll see what I mean). Cat. Is. Useless. The author elevated Cat to Queen (and put her over Griffin even though he is King) because that's the ~feminist~ way to write fiction these days -- bulls**t. Cat has no experience being a royal and no business being a queen. She. Is. Useless.

The author has YET to address Kato's trauma from book two! Helloooo, the man went through rape and we don't see any kind of PTSD or lasting emotional or mental impacts? Did he just magically forget about the experience? There is no mention of it, and Kato pretty goes about his business as usual. This is TERRIBLE storytelling. You can't put a fairly "main" character through some serious trauma and NOT ADDRESS IT.

The ending was awful! It was one of those endings in which the war is over and la dee dah, the book is over! Everyone lives happily ever after! Never mind that they are uniting three realms, which is ALWAYS very peaceful and happy. Sure, Jan.

This book was a mess.

I actually do not recommend this book. I mean, don't leave the series hanging, if you've read books one and two. If you've only read book one, I would recommend stopping there. Book one is the best of the series. Book two is okay but not amazing. Book three is crap and a big mess. Of course, these are my opinions. I'm pretty upset that the series is concluding badly (for me), with this mess of a book. There was a distinct lack of quality, and I think that comes from a lack of experience and a desperate needs to force a "feminist" character with feminist themes into the book. Instead we have a Mary Sue that gets all the credit but does no work.

2.5 stars -> rounded down to 2 stars. I tried! I really did. This series had so much potential. Now I'm glad I didn't preorder the book because I would have surely cancelled the preorder. I'm not sure I'll read anything by this author again - maybe? Maybe not.