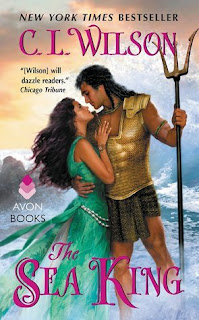 From the New York Times bestselling author of The Winter King comes a breathtaking new tale of love and adventure set in the mystical land of Mystral...

He wasn't supposed to choose her...

Seafaring prince Dilys Merimydion has been invited to court the three magical princesses of Summerlea. To eradicate the pirates threatening Calberna and to secure the power of the Sea Throne, Dilys vows to return home with a fierce warrior-queen as his bride. But politics has nothing to do with unexpected temptation.

A weathermage like her sisters, Gabriella Coruscate's gentleness exemplifies the qualities of her season name, Summer. Yet her quiet poise conceals dangerous powers she cannot begin to wield. Better to live without excitement, she reasons, than risk her heart and lose control— until an irresistible Sealord jolts her awake with a thunderclap of raw desire.

Until evil threatens everything they hold dear...

When pirates kidnap Summer and her sisters, Dilys is in a desperate quest to save the woman he loves. Only by combining his command of the seas with the unleashed fury of Summer's formidable gifts can they defeat their brutal enemies and claim the most priceless victory of all: true love.

It is no secret that over three years ago, I fell in love with The Winter King and have been eagerly awaiting The Sea King ever since. Dilys Merimydion was one of my favorite secondary characters of The Winter King, even if he only appeared at the climax of the book. He played a very important role in the survival of Wynter and Khamsin, and that is how he ended up in Konumarr, courting the Seasons (sisters of Khamsin). Even though I still loved The Winter King more, The Sea King was well worth the wait.

Princess Summer Coruscate has always been regarded as the timid Season of Summerlea, whose weathergifts are not so powerful. But the truth is, she has spent her entire lifetime suppressing her power, because it is too powerful. To protect everyone she loves, she makes sure that she always appears calm and serene... and significantly less powerful than her sisters. But this seems to change when Dilys Merimydion, notorious Sealord and Prince of Calberna, comes to Konumarr to court the seasons and hopefully take one back to Calberna as his bride. He is powerful, potently male, and enticing, and he doesn't seem to drawn to Autumn and Spring like he is to Summer. It is hard not to fall in love with him. Summer doesn't want to marry anyone, but she knows in her heart that Dilys is a good man. When disaster strikes and leaves everyone in an uproar, Dilys and Summer's growing bond will be tested as they fight for their lives, and for each other.

I knew I would love Dilys, given how much I adored him in The Winter King, but I don't think I was prepared for how much I would love him. He is wickedly charming and enticing, with alpha male qualities that are attractive and not overbearing. He is sweet and considerate, and like all Calbernans, he is solely interested in the happiness and satisfaction of his future mate. Calbernans treasure their women (Calberna is of a queendom, not a kingdom), and Dilys is no exception. He is a notorious captain, Sealord, hunter, victor, prince, leader, and he is appealing in so many ways. Dilys is confident yet humble, charming yet sweet, persistent yet considerate. He is easily a favorite romance hero of mine. He is imperfectly perfect, just the way I like it.

Summer is so different from Khamsin. She isn't outwardly temperamental and fierce. Rather, she likes to appear calm and timid and a little docile. She is gentle and sweet, but truly, the power that lies within her is untamed and wild. She is so afraid of losing control, so she tries to appear meek and unassuming. Summer doesn't embrace her power at first, and she definitely doesn't see her self-worth. But with Dilys chipping away at her defenses and treating her like a queen, she begins to accept her power, and accept him. Summer is so reluctant to get to know him, and then to marry him, but she has her reasons. It was wonderful to see her stand up and embrace who she was, and this was in no small part due to Dilys Merimydion.

The romance is very slow-burn. In The Winter King, the romance is elemental and powerful and full of chemistry. The romance between Dilys and Gabriella (Summer) is chemistry-filled and powerful too, but it takes some time before Dilys and Gabriella actually do anything (mostly because Gabriella tries to avoid Dilys at all costs - he awakens something in her that she is afraid of, but begins to accept and love). Dilys falls for Gabriella, and while Gabriella tries to deny her feelings, she falls for him too. It's such a slow-burn romance with a lot of suppressed lust (at least on Gabriella's part).

To me, The Winter King was steamier, but this book was very hot as well. There was probably less sexy times because of Gabriella's skittishness, but the scenes that were present were pretty hot. Their dynamic was on fire, with the clashes of intense power surrounding them. Both of them are extremely powerful and stubborn, so it makes for good chemistry.

Like the previous book, this one is a long one, for an adult romance novel. A lot happens in this book, besides Dilys trying to court the sisters, and then turning his efforts solely to Summer. I was so glad to see that the other two sisters were never interested in Dilys as more than a friend (though they definitely ogled him more than a friend might). I kept hoping that there would be no love triangle or cattiness between the sisters or anything like that. Spring and Autumn knew that Summer was avoiding Dilys purposefully, and they figured out pretty quickly that it wasn't because Summer didn't want him. I loved how supportive the sisters were of one another. I love that the whole courting-the-three-Seasons thing wasn't a big issue, and he stopped courting all three of them fairly early on.

At least half of the book is spent in Konumarr, with Dilys trying to woo Gabriella. The lady definitely doth protest too much - quite frankly, her numerous rejections of him made me sad. But it also made me smile because Dilys was so persistent and yet respectful of Gabriella's boundaries. That is how you woo a hesitant lady! Gabriella had her reasons, but Dilys wasn't giving up.

I love the world that Wilson has created. Full of magic, myths, legends, lore, bonds, fantastical creatures, attractive men, tough ladies... this book is a romance novel, but it is so much more. The fantasy world is so incredible and I feel like this book would appeal to readers that aren't romance readers, because of the rich world-building.

The climax of this book doesn't even really have to do with the romance! Of course, the romance is central, but the climax of the book deals with a threat to Calbernans and the princesses of Summerlea. My heart broke in a million pieces when the climax came, because of what Gabriella and her sisters had to endure. I was so surprised to see such in a romance novel, because it was heartbreaking (especially with Gabriella's account). But Wilson handled that heartbreaking, infuriating part of the story very well.

The book ends extremely well, in true happily ever after form. Dilys and Gabriella get a lovely ending that is more of a beginning than anything else. I love the decisions that Gabriella makes, involving Dilys. I know that sounds vague but I am so wonderfully happy with some of the political changes she made. The mark of a strong woman, in my opinion - she recognized her strength and the strength of her mate, and she put him on the same level (and not beneath her). You'll see what I mean. I have so much respect for Gabriella because she is quietly strong, intense in her gentleness, and a true queen that raises up her king. I loved this.

Also, fun fact - there are many Wynter/Khamsin appearances in this book! There are even scenes written exclusively from their POV (short ones at the ends of chapters, that sort of thing). They are the cutest! Khamsin is getting closer to her due date but that doesn't stop her and Wynter from being so adorable and throwing some serious heat. I love them!

I loved The Winter King and this book did not disappoint at all. I'm glad Wilson took her time with this book, because it was truly a masterpiece.

I definitely thought Gabriella did a little too much protesting when it came to Dilys and his courtship of her. I understood her reasons for not wanting to get close to anyone, but I felt like this line of thought and plot went on for too long.

I also wanted more sexy times! But this is related to what I just talked about, above.

Also, That Thing that broke my heart. It is well-written but so cruel/heartbreaking. (Well there are two things.)

Romance fans, don't miss this series. I have to especially recommend the first book (The Winter King), but the author definitely lived up to expectations with this book. It is very different and very good. Steamy and sweet slow-burn romance, amazing world-building, great storytelling - give The Sea King a shot. It takes a bit to get into the story, but it is a lovely story.

4 stars. I put off reading this book because I was scared - it is my most anticipated adult romance read of 2017. But I had nothing to be afraid of. Wilson wrote a story as beautiful as the cover. I will be anxiously awaiting the publication of the next books! Especially since I want updates on Wynter and Khamsin's babies.