Review: The Chaos of Standing Still by Jessica Brody 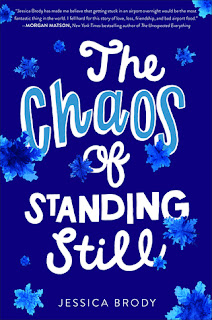 Over the course of one chaotic night stranded at the Denver airport, Ryn confronts her shattered past thanks to the charm of romance, the uniqueness of strangers, and the magic of ordinary places in this stunning novel from the author of Boys of Summer.

Ryn has one unread text message on her phone. And it’s been there for almost a year.

She hasn’t tried to read it. She can’t. She won’t. Because that one message is the last thing her best friend ever said to her before she died.

But as Ryn finds herself trapped in the Denver International Airport on New Year’s Eve thanks to a never-ending blizzard on the one-year anniversary of her best friend’s death, fate literally runs into her.

And his name is Xander.

When the two accidentally swap phones, Ryn and Xander are thrust into the chaos of an unforgettable all-night adventure, filled with charming and mysterious strangers, a secret New Year’s Eve bash, and a possible Illuminati conspiracy hidden within the Denver airport. But as the bizarre night continues, all Ryn can think about is that one unread text message. It follows her wherever she goes, because Ryn can’t get her brialliantly wild and free-spirited best friend out of her head.

But tonight, for the first time ever, she’s trying. And maybe that’s a start.

As moving as it is funny, The Chaos of Standing Still is a heartwarming story about the earth-shattering challenges life throws at us—and the unexpected strangers who help us along the way.

The Chaos of Standing Still is a story about grief, loss, and hope, and it all starts with a blizzard in Denver. Usually I'm not one for YA contemporary, especially tough-issue YA contemporary, but I've enjoyed Jessica Brody's books in the past. I didn't hesitate to request this novel when I saw it on Edelweiss, because I had been fairly confident that I would enjoy the book. Sadly, that wasn't the case. While The Chaos of Standing Still is thought-provoking and hopeful, it is also messy and unorganized - unlike its heroine. I almost feel bad for not loving this book, because it is clearly supposed to be a powerful, moving novel. But it wasn't for me.

Ryn is heading home to San Francisco, and she has a layover in Denver. The kicker? A huge blizzard is currently dumping a ton of snow on Denver, and there will be no flights coming in or going out of Denver. This is the worst possible scenario for Ryn, who needs to be home for New Year's the next day. She's traveling alone, back to her mother, and no one in the airport knows how badly she needs to be home. No one knows that her best friend died on New Year's Day nearly a year ago. No one knows that Ryn hasn't grieved yet, and she's hearing Lottie's voice in her head. A night in the airport is going to be torture. But Ryn makes an unexpected friend when she runs straight into a cute guy who had the same phone case as her. She doesn't expect him to be so sweet and thoughtful and understanding. She doesn't expect to let down her guard with him. She doesn't expect to finally come to terms with Lottie's death - but it is this that is so hard to understand. Ryn doesn't realize just how much she needed someone, to help her move past Lottie's death.

Theoretically, I should have enjoyed this book. Even though I'm not a YA contemporary fan, and definitely not a tough-issue YA contemporary fan, I tend to like books dealing with a hero and heroine stuck together. And I did really like the setting. The airport is a great setting, especially since all flights throughout the entire airport were grounded for the night. No way in, no way out, not even for the employees. It was a long evening and night, but everyone made the most of it.

The setting, I liked. I also adored Xander - he is a sweetheart. He is fun and charming, filled with energy and good humor. He is Ryn's "manic pixie girl" except he is a guy. She is a mopey sad girl, but when she meets him, he makes her do all sorts of fun things with him around the airport, and suddenly, she isn't feeling so mopey anymore. Xander is a good guy with good intentions and a good heart - and quick frankly, he deserved someone better than Ryn.

I didn't really like Ryn. More on her below. And the story. And the ending.

I really wasn't able to connect with Ryn, which make me feel bad, because it didn't feel fair to dislike someone who was clearly repressing grief. Ryn is not a happy person, and not a nice one at times. She never really grieved for Lottie, and it has been a year. She makes things so hard for her therapist, like not volunteering anything to talk about. She lies about so many things, even though she is a terrible liar. Ryn hasn't been coping well, and this has been affecting more people than just herself. It was hard for me to like Ryn because she wasn't very nice to people, especially Xander. She was flat-out rude to him on their first encounter, and she didn't try to be nice to him after that. It was only about halfway into the book when she started to treat him like a human being, but by then, she started to act a little crazy (her words, not mine). Granted, she owned the fact that she was acting crazy (again, her words, not mine), but she was getting bent out of shape with Xander and other people who were trying to help her.

I didn't care for Lottie, which I probably shouldn't say since she is dead. She was fun and inhibited and caused all kinds of trouble - #richpeopleproblems. She had so much time and money and freedom on her hands, with little to no parental supervision. Lottie had no filters, no barriers, no rules, which made her a fun friend, but a dangerous one too, especially for someone like Ryn (a non-rule-breaker, a good girl, a straight-laced citizen).

There was too much going on in this story. Ryn and all of her grief and shenanigans was enough. But there was too much going on with the airport too. The crazy storm, okay. The grounded flights, okay. The weird prodigious 14-year-old who was working on his Master's degree and trying to chase down a conspiracy theory in the airport? Random, unnecessary subplot. The bingo game that was probably supposed to be fun but seemed stupid? Random. Ryn making friends with the employees of an airport restaurant? I find it hard to believe in real life. Some stranger giving Ryn his VIP Million Mile-High Club card? Not plausible at all. There was so much random and unnecessary parts to this book that made it so busy and messy. The grief/loss aspect paired with the storm and having to stay overnight at the airport was enough.

The romance was so pitiful. This book would have benefited by having no romance at all. Ryn pushed away Xander at every turn, even right down to the second she wanted him to kiss her and he wanted to kiss her/her to kiss him. She literally turned her cheek. Again, I understand the fact that she isn't grieving well and she's messed up in the head with hearing Lottie's voice and blah blah blah, but she wasn't very nice to Xander. And then there is the fact that they weren't even going to board the same flight - he was going to Miami, she was going to San Francisco. I'd rather not read romances that have an expiration date, like this one. The romance was so lackluster and not-there, but of course it was there. And the thing is, this book takes place in the span of about twenty-four hours. This isn't enough time for a solid friendship to blossom, let alone a romance.

The ending is exactly what you would expect, in terms of the romance. In terms of Ryn... it's amazing how, after less than twenty-four hours, she has come to terms with many things (like Lottie's death, that one unread text message left by Lottie, all of Ryn's lies to everyone). Kind of a miraculous turnaround, don't you think? I was a little skeptical.

I feel like there are better books dealing with grief and loss out there. I can't think of any off the top of my head because I typically don't read these types of books, but I'm sure there are better ones. The thing is, I didn't find this book funny, or moving, or heartwarming, or any of those adjectives in the synopsis of this book. Instead I was a little annoyed as I was reading, and even when I wasn't annoyed, I wasn't super excited or in love either. This book was okay and not absolutely terrible, but it really isn't worth the time either.

3 stars. I didn't really love Brody's previous two books and I didn't love this one so I think it's time to break up with this author's books. I did love 52 Reason to Hate My Father, but I feel like I haven't truly loved another one of her books since that one. Liked, yes, but mostly I've felt kind of ehhh towards her books. Like this one - I could see it having potential, being pretty good, but maybe not for me. I didn't connect with the heroine and that was the downfall there (for me).