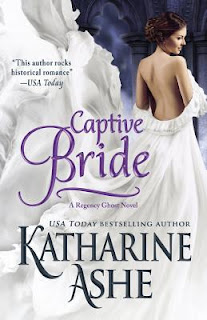 From the bestselling author of The Earl and My Lady, My Lord comes a delectably sexy tale of a lady torn between loyalty to her family and the man of every one of her forbidden dreams. A dark castle, a handsome lord, and a wicked ghost... When Bea Sinclaire's scapegrace brother begs her help to rescue a maiden from a haunted castle, she seizes the chance for adventure. If only Lord Peter "Tip" Cheriot didn't insist on coming along. How can she maintain a clear head in the face of danger when Tip is so utterly, deliciously distracting? Then an alluring ghost makes Bea a shocking offer, and he won't take no for an answer. Tip Cheriot has loved Bea forever, and he's determined to have her-no matter how scandalous his past. But a cursed specter has claimed Bea as his bride, and Tip must save her from eternal darkness before All Hallows Eve. In the race to capture the heart of one daring lady, it's every man-and ghost-for himself. * This is an reissue of the original 2012 edition, with minor editorial changes and exclusive BONUS MATERIAL: the Captive Bride playlist.

This book was originally published in 2012, but the author reissued the book after changing the cover and doing a little revising and editing. I absolutely love this new cover - it's so lush and dramatic and beautiful. I received a copy from Ashe but this has in no way affected my opinion of the book.

That being said, I really enjoyed this book. I decided to pick it up on a whim because there are only a few days until Halloween, and this seemed like a great romance novel to read during the Halloween season. A haunted castle, a villainous ghost, a delicious tug-of-way romance? Sold!

Beatrice Sinclaire is used to getting her twin brother out of trouble. She is used to doing everything her overbearing mother tells her to do. She is used to Lord Peter Cheriot proposing to her every couple of months. She is used to telling him no, despite having been in love with him for years. What she isn't used to is getting a letter from her brother, who is in Wales, telling her that there is a maiden in a haunted castle, and she (Bea) must help him with the situation. Bea - and Peter, and Bea's great-aunts - travels to Wales and discovers that there is a ghost in the castle and he is very much real. He has been cursed and is determined to break the curse by marrying a virgin maid, as the curse dictates. That could be Lady Bronwyn, the maiden that Thomas (Bea's brother) is determined to save... or that could be Bea. They only have a few nights until All Hallows Eve, when the ghost will take what he demands.

I'd never read a Regency romance with a ghost involved! This ghost was determined to ruin lives - or it seemed. He was actually quite lonely, not that that excuses his actions. In any case, a ghost in a dark, haunted castle is an intriguing feature and I was a huge fan.

I liked Peter (or "Tip", as he is nicknamed) from the start. He is charming and sweet and very considerate, and he has a teasing, wicked nature about him. He is always asking Bea to marry him, even though she always says no. I love how nice he is to Bea's mother and great-aunts, and how he clearly tries to please everyone else. He isn't a pushover but he is so considerate of everyone. Perhaps it is his status (he has title and wealth, whereas Bea's family doesn't), but I think it's more of him being a very good guy. He is persistent and protective and he is prone to a little jealousy, at times. He's a great example of how attractive an alpha male can be, when written well.

Bea was fun to follow, though I liked Peter more. She is clever and intelligent, though occasionally she is a little dense. I think the lady protested too much and sometimes she was a little hypocritical - but that was all part of her character development. She protected her heart and didn't want to believe that Peter was actually serious about proposing. She loved him since they were young, but she hadn't know that he was being serious with her. Bea's character development is the most profound because she has the most to come to terms with. She realizes that Peter is serious, that he is a good guy, that he loves her, that he wants her just as much as she wants him.

For once, the aunties in the story are actually really sweet and helpful, and not annoying or bothersome. They weren't even c**k-blockers - they actually were silently cheering for Peter/Bea to be a thing! I loved the two aunts, especially Aunt Julia. She was so sweet and supportive. And Aunt Grace was firm and supportive and didn't put up with Bea's constant denial.

I hated Thomas and didn't really care for Lady Bronwyn, but I'm glad they got their happy ending. I hated Bea's parents but I was happy to see Bea's mother grow up and stop treating Bea like an ugly stepchild, when in fact Bea had always been her best child.

The romance is very sweet, full of banter and a tug-of-way in terms of chemistry. Bea wants Peter desperately, but she isn't sure he is serious about her. Peter wants Bea desperately, but of course she has turned down every one of his proposals, so naturally he wonders if she doesn't want him. But the chemistry between them is super hot and never lets up. There are some great sexy times in this book, even with it being a shorter book. I loved seeing Peter and Bea grow in their love for each other, especially upon realizing that the other has feelings for them.

This was a fun, sexy, and thrilling read that is perfect for Halloween! It ends wonderfully and it's a romance novel that I will be rereading. File this under one of Ashe's best!

I wish Bea would have stopped putting herself in denial and being a hypocrite - BUT I recognize that that was all part of her character development throughout the story. But still, it got tedious. Good thing Peter had an iron will and unbending persistence. He is a sweetheart!

If you have enjoyed any of Ashe's books, give this one a try! She self-published it and it's fairly cheap on Amazon Kindle, cheaper than a publisher's price. It's perfect for Halloween - not a scary book, but there is definitely haunting vibe to it, with the ghost and the castle and everything boiling down to All Hallows Eve. Romance + Halloween vibes = win!

4 stars. I'm going to dig through some of Ashe's older books, because it seems like I've been enjoying those! I adored her Prince Catchers series, The Scoundrel & I, The Pirate & I... her latest series has been up and down for me but I'm sticking it out. I have Swept Away by a Kiss and may try it soon!

Was this review helpful? Please let me know in the comments section
Posted by Alyssa at 12:00 AM