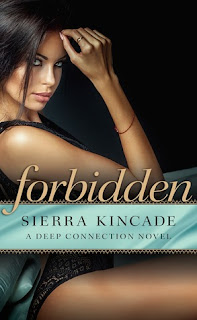 Elaina Talent is the black sheep of the family, closer to her criminal father than either of her siblings. It goes without saying that she’ll take over the Talent family’s many lucrative businesses—legal and illegal—now that her father is incarcerated. But when events come to a head with an Irish drug dealer based in Las Vegas, Elaina is forced to flee, wounded and with a dangerous secret to keep safe.

Garett Sharp fell hard and fast for Marsella Talent. The ex-army medic is still licking his wounds over Marsella’s rejection when her sister, Elaina, shows up in need of help in Ambrose, Ohio. Out of loyalty to Marsi, Garett nurses Elaina back to health, but remains suspicious of her intent. However, the more time they spend together, the less he can deny the sparks igniting between them. But exploring the passion they feel may lead to an explosion neither can handle.

This is the first book I've read by Sierra Kincade (though I've read several of her YA books - written under a different name). I actually had been reading her YA books for years and hadn't known that she wrote adult romance. Being the adult romance fan that I am, I knew I had to try something be her. I got a digital galley invite of this book from the publisher and decided that that was a sign. I'm a little early in posting my review, but I couldn't not share my excitement for this book!

This is the third book in the Deep Connection series. First we were introduced to Jake and Marsella, and then Cole and Kenzie. This third book follows Garett and Elaina. Elaina is Marsella and Cole's sister, and Garett is Kenzie's brother. Years ago, Garett nursed Marsella backed to health after she got into a car accident - and he was rejected by her. Years later, Elaina stumbles into Garett's care. She is running from something, and Garett isn't going to stand by and watch her suffer. He helps her get better, but he can't not be a little suspicious. After so long, she has run to her family - but why? Is she bringing trouble with her? And what is she and Garett going to do about their growing feelings for each other?

I wasn't sure about this book at first, because of the fact that Garett had been in love with Marsella. But this isn't an issue in this book. Marsella is happily in love with Jake, as is obvious by book one (Forsaken). Garett is waaaaaaay over Marsella and honestly that whole thing is barely mentioned (and for the better). It comes up in the story, but not as a "big thing". Garett has no residual feelings for Marsella, and Marsella was never interested in him in the first place.

On paper, Elaina seems like someone who would be difficult to like. She took over her father's business in dealing drugs. She herself did drugs, she's a stripper, and she's a rat - she is an informant for the cops, while she also deals with the drug dealers and other kingpins. Elaina is tired of it all, and doesn't want that lifestyle. But she doesn't want to bring danger to her family. When she is badly hurt and suffering from a gunshot wound, she has nowhere else to turn. But she runs into Garett Sharp before she can find her sister.

Garett knew who Elaina was as soon as he saw her, but even before he recognized her, he was ready to help her. Garett is a very good guy, always willing to help others, without questioning anything. He is an act-now-ask-questions-later kind of guy. He's selfless and thoughtful and introspective. And yet, he has a lot of intensity and passion simmering beneath the surface. I adored Garett, because he's so darn nice, but also protective and loyal. Elaina is suspicious of his intentions at first, because to her, there is no way a guy is that nice, especially to her.

The romance is super hot! After Elaina starts to heal, things start to heat up between these two. I love the dynamic between them. Garett is kind and patient, and Elaina... Elaina needs that patience from him. She may have been a stripper but she never let men touch her, because of some things in her past. Having Garett touch her is a little scary at first, but then it's so good for her. She needs him physically and emotionally, just as he needs her in the same ways. This book was incredibly hot, with so many fiery scenes that lit up the pages. These two have great chemistry!

Garett has his own demons to confront, with his past as a medic in the military. Having gone to Afghanistan four times, and having seen terrible things as a medic, Garett suffers from PTSD. He needs that connection with Elaina and he never knew it.

Elaina's situation with Frank Lynch (one of the bed guys involved in her father's business) and the cops is handled in the last quarter of the book. The first three quarters deal more with Garett and Elaina's relationship. And then it is time for Elaina to make a decision.

I really enjoyed this book! It is sexy, sweet, and action-packed, and it is just as good as I expected it to be. Also a bonus - there is very little drama in this book. Sometimes adult romance novels are filled with drama (especially towards the climax), but that wasn't the case with this book. This book was a pleasure to read!

I can't think of anything specific that I didn't like!

Fans of this series will not be disappointed! This book was an excellent romance novel, with sexy, sexy times, a sweet yet intense hero, a fierce and determined heroine, and a lot of family bonding/family themes. Family is so important in this book, as is emotional healing. There is a lot going in this book, and it is put together really nicely. Any fan of hot adult contemporary romance would enjoy this book!

4 stars. I almost regret not starting from the beginning! But I loved Garett and Elaina's story. They are lovely together - quiet and intense + prickly and defensive. I want my own Garett!